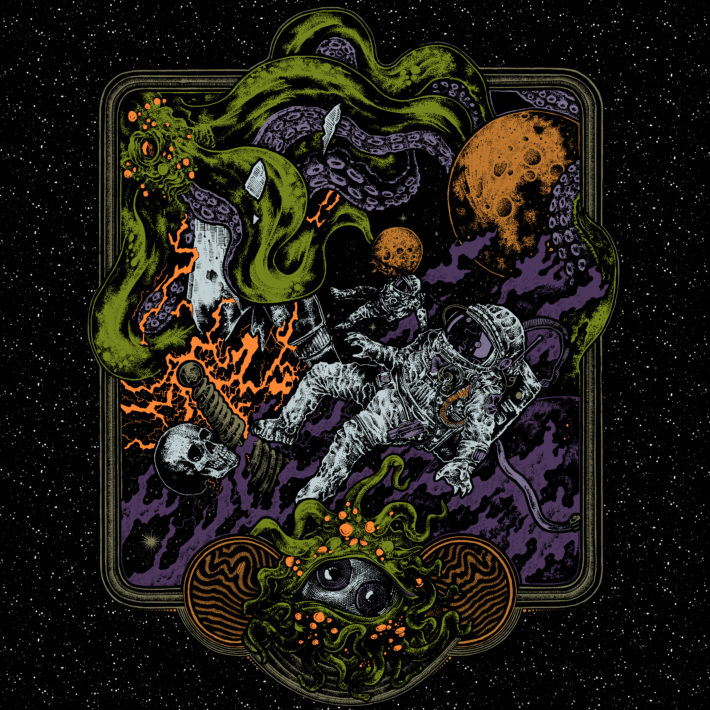 Have you ever heard of Het Droste Effect? Not the repeating-image-within-itself visual effect, but the band. Well, I guess not. It was really a you had to be there thing. Though not physically. It is a Dutch trio that released a bunch of EP’s and a full-length between 2011 and 2015. Their first two EP’s were a very interesting, and if I might say satisfying listen. It was just a collection of stoner / psychedelic rock songs where a band tried out a bunch of different ideas with various instruments and effects. And they all worked! It wasn’t exactly fleshed out, as it couldn’t’ve much been at 20 minutes per record, but it was fun and promising. I honestly believed Het Droste had a big future ahead of themselves. Unfortunately, after some tumult, and even one breakup, they weren’t exactly the same. Their final release, the full-length from 2015 still had that spirit of experimentation, but ultimately felt uninspired and directionless. It just wasn’t put together into anything coherent

The reason I’m talking about some obscure stoner band is because I was instantly reminded of them upon listening to Ghost:Hello. In fact, I’ll say it straight up – “Sound of Color in Space” sound like what Het Droste would sound like if their ideas succeeded. It’s a full-length record where no two songs sound the same, where many different styles and approaches, tempos and dynamics are employed, but ultimately, one where each songs sounds like a finished product and even where they sit comfortably next to each other despite the variety.

So let’s unpack this books of goodies and see what we got here, shall we? The album opens with “Alcubierre Metric” (Alcubierre referring to the proposed warp-drive technology and the physicist who did so), a spacey ambient bit. Alright, so we’re among the stars. The scene is set. This is followed by “Fingerstache” which almost feels like a second intro in the sense of telling you what the album is all about, but this time by providing musical example. But it’s not superfluous in any way, in fact being a surprisingly tight track. Two things stand out here. First, we’re greeted for the first time by one of the key elements of the album – that sweet, sweet smooth guitar fuzz. Heavy, but not over-encumbering. Loud, but not noisy. Thick, but not, uh, obese? In any case, it’s really pleasant on the ears, and Ghost:Hello use if successfully for a variety of purposes, whether kickass riffs, psychedelic musings or relaxing hams. Second thing, the production is really tight. It’s appropriately loud, but mixed in a very balanced way as to not make anything grating, as it also managed to accommodate the various styles on this record. It just flows smoothly through your ears, which I’m seeing is becoming a common motive here.

After “Fingerstache” which alternates between a stoner romp and atmospheric space driftings, we come to “Perfect”. Now this one is an earworm, a quite whimsical, playful track with the vocalist chanting “I’m perfect in all ways, all ways” over a bouncy beat (kind of a Fatso Jetson vibe). “The Mouth of A Gift Horse” is basically the punk track, fun but unremarkable. Now “Bardo State”, this is the one where you start hitting the bong. What I’ve failed to mentioned previously is the strong presence of synths on this record, mostly being very effectively used to accentuate the cosmic feeling pervading the album. But here it’s front and centre, giving us a very trippy round of (well mixed I might add) synth loops. It’s just satisfying to listen every time and I almost wish it was longer (it’s only five minutes). Then we got “Nemesis” which is basically a sludge folk song. “Burnout” with it’s vocodered vocals is another dank trip, etc.

Anyway, you catch my drift. It’s a varied collection where each song has its own identity, bringing something else to the table, being only unified by the genre of psychedelic stoner rock. This might sound like a downside, like we’re dealing with an incoherent album and band that’s middling around without really settling on a style. But I don’t think that’s a problem with Ghost:Hello. First of all, the quality mix and instrumental tightness brings the album together, because while there’s different songwriting approaches, the musical philosophy behind it remains the same. Second, and this one is especially important when discussing the future of the band, is the general laid-back vibe this album has. Starting from the aforementioned smooth and pleasant guitar tone to the absolutely unencumbered flow the album, you can tell that Ghost:Hello are just here to like groove out man, not engage in intricate compelling artistry.

And they’re really good at just jamming it out. Remember that this is their debut. When new bands drop such an “unfocused” first record, people tend to say “it’s growing pains”, “they’re still developing their style”, “they need to find their bearings” and so on. And in many cases these are justified and many bands come to release killer sophomore records (think Kyuss’ Wretch and later albums). But I believe Ghost:Hello know exactly what they’re doing and want to do. If we’re gonna speculate about their future albums, and let’s say express the desire that they release something more serious, a more compelling, complex musical narrative with their next albums, that’d would be perfectly fine. It would also be perfectly fine if they just released another record of varied, tight jams. The band’s got plenty of talent and shouldn’t burden themselves too much to one-up themselves on the next record. I know they got it.