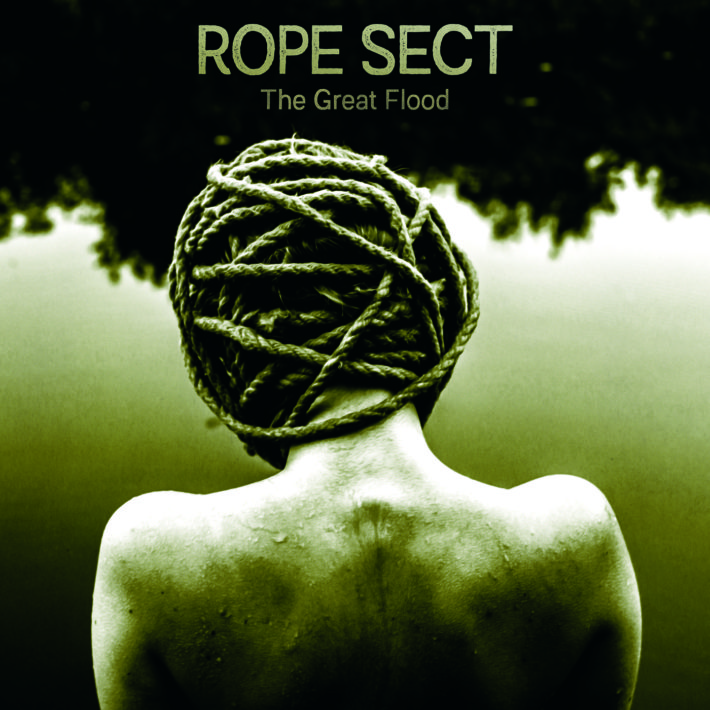 Seclusion. Naked spite. Eleutheromania. These are some of the motto’s that the German band, Rope Sect, express in their music. While the band name, together with the cover of their upcoming album (which portrays someone with their head wrapped in rope) might suggest it’s a dsbm of doom band, instead Rope Sect makes dark rock. They were founded in 2017, releasing an EP, called Personae Ingratae, soon after which they released a 7″, called Proselytes. This Friday, about three years later, the band releases their debut full-length, called The Great Flood, through Iron Bonehead Productions.

Divide et Impera, the record’s opening track, starts off with a man announcing the arrival of “The Great Flood”, that will cause everything on the earth to die, after which the rock trio starts playing some up-tempo rock music. The drummer plays a standard rock beat, which fits the rest of the instruments quite well. There’s dissonance in the guitars, alternating between simple, yet effective riffs, and rhythmic chords. The vocals have quite a lot of echo, which give them a pleasant, dreamy vibe. On this first track, the album’s sound is introduced, and it doesn’t really change over the course of the record. The next song, Rope of the Just, has quite a basic drum beat as well, with some cool guitar riffs on top of it. In contradiction with the band’s name and themes, the song sounds almost consoling, partly brought about by the gentle vocals, contrasting with other bands in the genre, who usually have rawer vocals. After a few calmer songs, it’s time for The Underground Paradise, which starts off with a fast guitar riff that, together with the drums, build up the music towards the band’s full sound. There’s haunting melodies in the guitars, carrying through the vibe of the first half of the record. In the verse, there’s an interesting chord progression, where they play a major chord where you wouldn’t expect one, which adds an intriguing element to the music.

On two tracks, one of which being Flood Flower, the band has invited guest vocalist Mat “Kvohst” McNerney (known from Hexvessel and Grave Pleasures), who contributes both his singing skills as well as lyric writing to the two songs. His voice fits the rest of the band really well, giving the music some variety while still keeping the sound intact. Near the end of the record, the music’s energy starts to rise, both in the songs’ tempo as well as in the intensity of the other instruments. Diluvian Darkness, the final track, is the album’s longest song, just short of 6:30 minutes. Structurally, it’s also the record’s most interesting song. It starts with a waltz-like ensemble between the drums and guitars, after which the vocals join in. The guitars don’t just work together with the drums, but also with the vocals, emphasizing their haunting melodies. The second half of the song has more energy, which can be heard especially in the drums, that start by playing more snare hits, and eventually even doubling the kick drums. In the end, it dials down to just a calm guitar riff with some light, folky vocals on top, giving the record a calm finale.

In conclusion, The Great Flood is a decent record with a cool sound and some interesting elements every now and then. They’ve created a sound that’s nice to hear, and they maintain it throughout the album. However, the album doesn’t really stand out between other bands in the genre, and after putting it on a few times, there aren’t really a lot of new things to discover. It’s fitting if you want to hear some background music, or to put on at a party, but other than that, it doesn’t have a lot that invites you to put it on repeat.