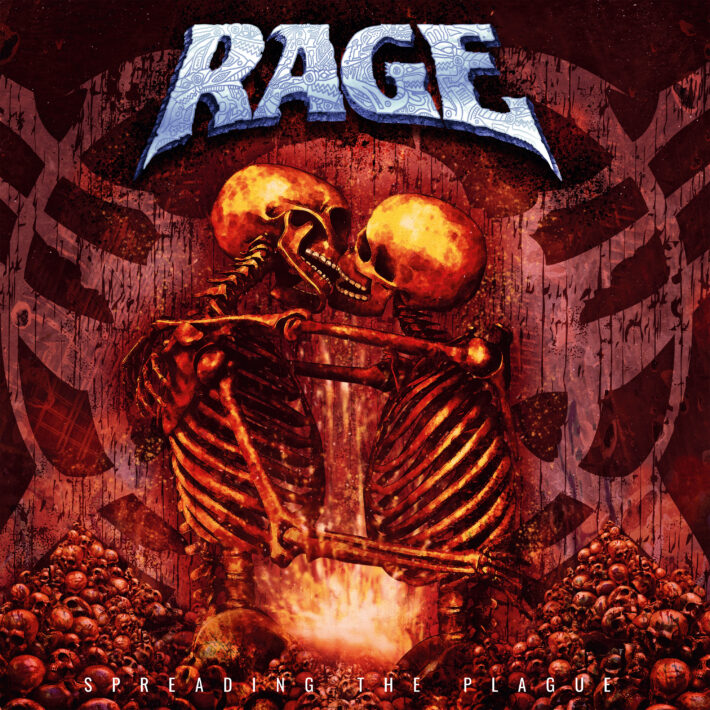 Rage is Rage. You’ve heard them. Or if you haven’t, this is a German power metal band that has been going strong for decades. Their album Soundchaser stands out as particularly excellent. If you don’t like that one, no problem, there are a full twenty-two other full-length records for you to listen to, including last year’s solid Resurrection Day. But we’re not talking about any of those. Not content with a more twenty-three full-length releases, more if you count the releases under a different name, Rage have returned to give us a new EP: Spreading The Plague.

On Spreading The Plague, you will receive absolutely no surprises. Rage is still Rage. They play high quality music that rides the border between heavy metal and power metal, with a straightforward songwriting approach that seems made for the live stage. While all aspects of their songs receive care, the choruses are the height of their music. The first half of Spreading The Plague consists of three new tracks that didn’t make it onto Resurrection Day, while the second half is alternate and live versions of past hits.

So, new songs first. All three sound great. I’m not sure what kept them off of Resurrection Day, maybe there were some thematic issues, but I’m thankful that Rage found a way to release these tracks to us anyways. Opener “To Live And To Die” sounds especially grandiose, with a sing-along chorus that showcases Peavy Wagner’s raspy vocals.

Outside of the massive choruses, the rest of the new songs are absolutely fine. The guitars and bass do exactly what you’d expect from a band like this, the riffs are well-executed and not overly complicated, and the drummer pounding away pumps up the EP’s energy more than anything else. Nothing here outside of the choruses steals the show, but nobody will care because Spreading The Plague contains the sound of a veteran band playing with full and accurate confidence that they’ve made gold. It doesn’t matter if the guitar solos are actually good or not as long as they maintain the gasoline fire that is Rage’s approach to song crafting until another big moment is able to come along. And that was the entire purpose. It’s refreshing to hear a band that can sound like this.

And then we go to the older songs. These sink the release for me. First we have an acoustic version of “A New Land,” which I guess someone somewhere will be looking forward to. Unlike the new tracks, this takes the band’s strengths and represses them. While the track serves as an interesting analysis of how much instrumentation and tone matter in songwriting, its inclusion mostly makes me want to go listen to the original instead.

Acoustic renditions of power metal songs can work wonderfully, but there’s a reason that this version wasn’t what was released on the original album. Wagner’s singing style works great for screaming on top of a legion of electric guitars as a dragon flies by. He doesn’t mesh as well with the quiet, contemplative approach that this rewrite takes. This acoustic track is fascinating, and fans of the band might enjoy hearing an alternate universe. This sounds like a track I would lose my mind over if they played this version live. But on a recording like this, it feels like an awkward exploration that doesn’t quite work.

Which, fine. This is an EP, this is the time for doing awkward exploration that doesn’t fit the rest of the release. The final two tracks follow suit, and while they didn’t click with me, I’m sure bigger fans of the band will appreciate them. Ultimately, Rage have nailed their goal on Spreading The Plague: Some new tracks that sound excellent, including a single that can be easily digested, and a few rabbit holes for the more die-hard fans to go down within a short, non-essential passage. If you’re a fan of Rage, you will want to scour over this release, which shows that the band are still masters of their style. If you’re not a fan of Rage but you do like power metal, I’d still recommend giving this a shot. It’s easy, energetic, honest, and the sound of a band that are experts at screwing around.