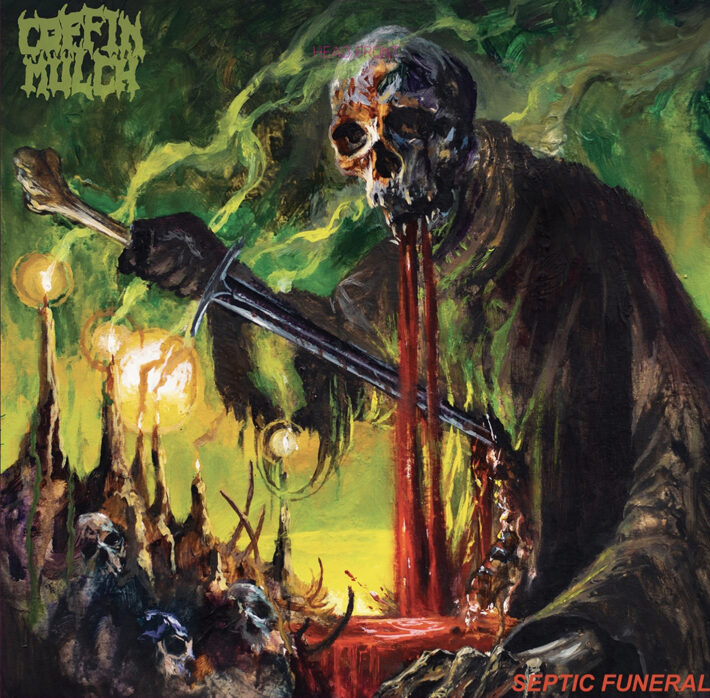 Death and disease have captured the imagination of humanity for centuries. Medieval tapestries bear haunting images of leprosy and smallpox victims, while seminal literary accounts such as The Decameron contain startling descriptions of plague boils. Our contemporary society is dealing with the physical and mental limitations of a worldwide pandemic. The musicians behind the Scottish death metal band Coffin Mulch capture this sentiment on the cover of their debut album Septic Funeral. Painted by Adam Burke, the art features a sickly corpse plunging a sword into his chest and spilling his entrails onto a pathway littered with skulls. Blood and bile spew from his mouth while striking green fumes from flickering candles outline the sky. The artist’s work reminds me of the eternal words of Macbeth: “And all our yesterdays have lighted fools / The way to dusty death. Out, out, brief candle!”

Does the vile imagery on the album cover match the music? Absolutely. Everything about Coffin Mulch’s debut album screams old school death metal. The terse sonic attack clocks in at just over 20 minutes, but in that short period the band hammers the ears with wonderfully distorted guitars and guttural vocals that cause the demons in hell to shiver. While the production quality on the album is lofi at some parts, this adds to the old school vibe that emanates from Coffin Mulch. Unfortunately, Septic Funeral also has several forgettable moments. Two shorter tracks are filler material, a disappointing blunder considering the impact of the other songs on the record.

The title-track “Septic Funeral” commences with tolling church bells that summon dead souls. Guitar, bass, drums, and vocals join the fray, and for a little over 3 minutes the band grinds out doomy riffs in the style of early My Dying Bride. Then the track shifts into a quicker tempo and features an atmospheric guitar solo and a standalone bass line. “Septic Funeral” is a powerful track that hints at excellence throughout the LP.

“Black Liquefaction” is a punk-influenced song with mid-range shrieks and shouted vocals. In fact, the drums take a page out of D-beat music. Overall, it’s very different from the first song on Septic Funeral and provides a change of pace. “Live Again” is one of the duds on the album. It almost seems like material that was cut from “Black Liquefaction.” As I listened to the album on repeat, it was one track that I kept wanting to skip.

Coffin Mulch surges forward with the next blistering song on Septic Funeral, called “Onward to Death.” The drumming is top notch on this track, and I am head-over-heels in love with the distorted, crunchy guitar tone. There’s a lot to digest, including several tempo changes and a guitar solo. The song fades out with the vocalist growling “onward to death” and the tramp of marching boots. One can imagine legions of the damned trudging through blood, dirt, and ash as they make their way to their inevitable doom. The second-to-last song on Septic Funeral is entitled “Carnivorous Subjugation.” While aptly named for a death metal album or the soundtrack to a zombie film, the song is under a minute in length, which doesn’t give time for any memorable theme to develop.

The closing track on Septic Funeral is the band’s namesake. “Coffin Mulch” first appeared on the band’s demo in 2019, but a different, lengthier version of the song closes out Septic Funeral.  This track is reminiscent of early ’90s death metal like Gorguts and Autopsy. The guitars and drums carry this track, although several low growls from the vocalist are commendable. The song and album end with a sound recording of viscous, dripping liquid. Logically, the oozing fluid is the corpse’s blood and ichor, bringing the listener full circle to the putrid essence of the rotting corpse. It’s a fitting artistic touch, nuanced but not overbearing.

Fans of old school death metal bands like Gorguts, Autopsy, and Death will find plenty of material to enjoy on Septic Funeral. Coffin Mulch whet my appetite for old school death metal but didn’t quite appease my gnawing hunger. Going forward, I would love to see a more immersive full-length album from the band with additional tracks. Until then, I’ll have to make do with the decomposing sounds of rotten decay on Septic Funeral.