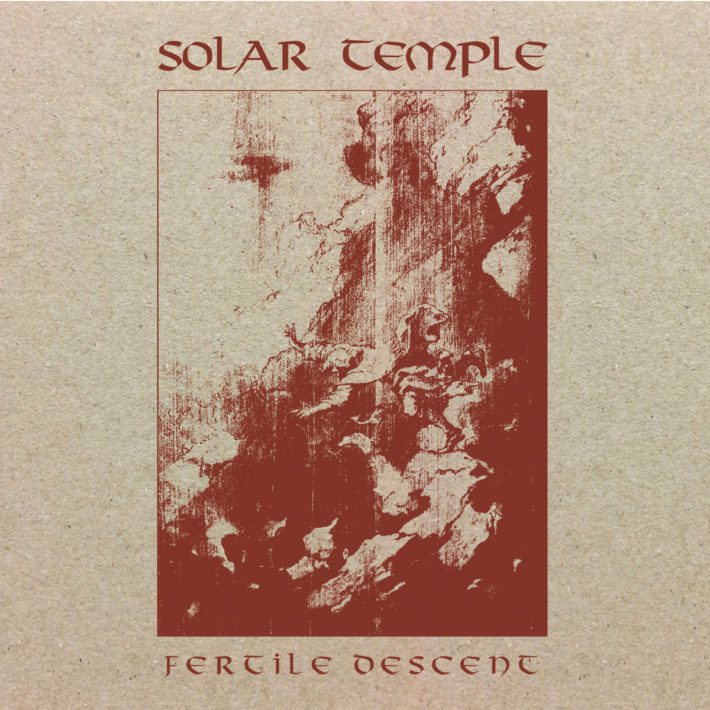 Full disclosure, I am a sucker for long songs. If an artist takes the time to craft a lengthy piece of music, that must mean there is something special about (I used to say “the longer the song, the better” but quickly realized that’s not always the case). Regardless, long pieces of music have a special place in my heart, which is why I am excited for and impressed with Solar Temple’s debut outing. Fertile Descent consists of only two tracks that span a total run time of 36 minutes. A lot of things can go wrong in that amount of time, but the band manages to hold it together.

One of the things that is immediately noticeable in the first few minutes of the record is the use of melody. This isn’t typical black metal; the focus is less on the dissonance and more on the melodic progression. “Those Who Dwell in the Spiral Dark” displays this wonderfully. All throughout the song, instead of an assault on the senses, there is a flowing movement of notes. There are distinct sections to the song, with a quick-paced intro, a calm middle, and a trudging outro. This won’t be the first time I say this, but the album walks a fine line between repeating things too many times and inducing a hypnotic effect. The outro of this song in particular seemed to drag on a little longer than it should have.

As “White Jaw” continues the album, it is clear that the band has avoided using harsh vocals. In its place is an intermittent narrative-style voice that speaks here and there occasionally (but it’s very difficult to understand what is being said). It is actually refreshing to not have any focus on the harsh vocals, but keep the focus on the atmosphere of the guitars and drums. Don’t get me wrong, I am a black metal fan and I love the aesthetic the vocals give it. But not having them on this record gives this band something truly unique to stand on; it shifts the focus of the band to write really strong music that will hook the listener without the vocal element.

Another unique aspect to this album is that the guitars tend to use chord progressions, as opposed to individual notes for melody. Particularly in “White Jaw” on the latter half, it is all melodic progressions without much for single line melodies. This works well for what the band is trying to achieve. It opens up the song, making it sound full and spacious, with enough room to allow the mind to wander in whatever direction it wants to go. It gives the album a more “grounded” feel, if you will. Typical black metal albums might consist of music that is usually associated with fantasy and dark emotions, but this music never feels like that. I know that contradicts what I said in the previous sentence, but because of the way this music progresses, the mind can wander without getting lost in the chaos that usually present in traditional black metal. Does that make sense?

While this album does have a lot of great components to it, it is not without faults. As I stated before, these songs drag on for longer than they need to be. There are great riffs and progressions within them, but they outstay their welcome from time to time. Like I said in the beginning, I love long songs. And these are good ones, but they could be condensed down a tad. I would prefer shorter songs that are concise and well-written than good ideas that get overdone. That came out meaner than intended, but the point is don’t sacrifice the quality of the song for the length.

The only other complaint I had about this album was the narrative vocal. I think it’s a unique approach and something new, but because it was difficult to discern what was been said, it was more distracting than helpful. If the words were clearer and more upfront in the mix, it would reflect more positively on the music.

At the end of the day, this was a quality debut album from this band. There are a lot of great moments happening and it creates a wonderful atmosphere. Solar Temple has established themselves as unique in this kind of music, and that is not always an easy thing to do. This band really shines in their use of melody. I look forward to hearing more from them.

Tracklist:
1. Those Who Dwell in the Spiral Dark
2. White Jaw