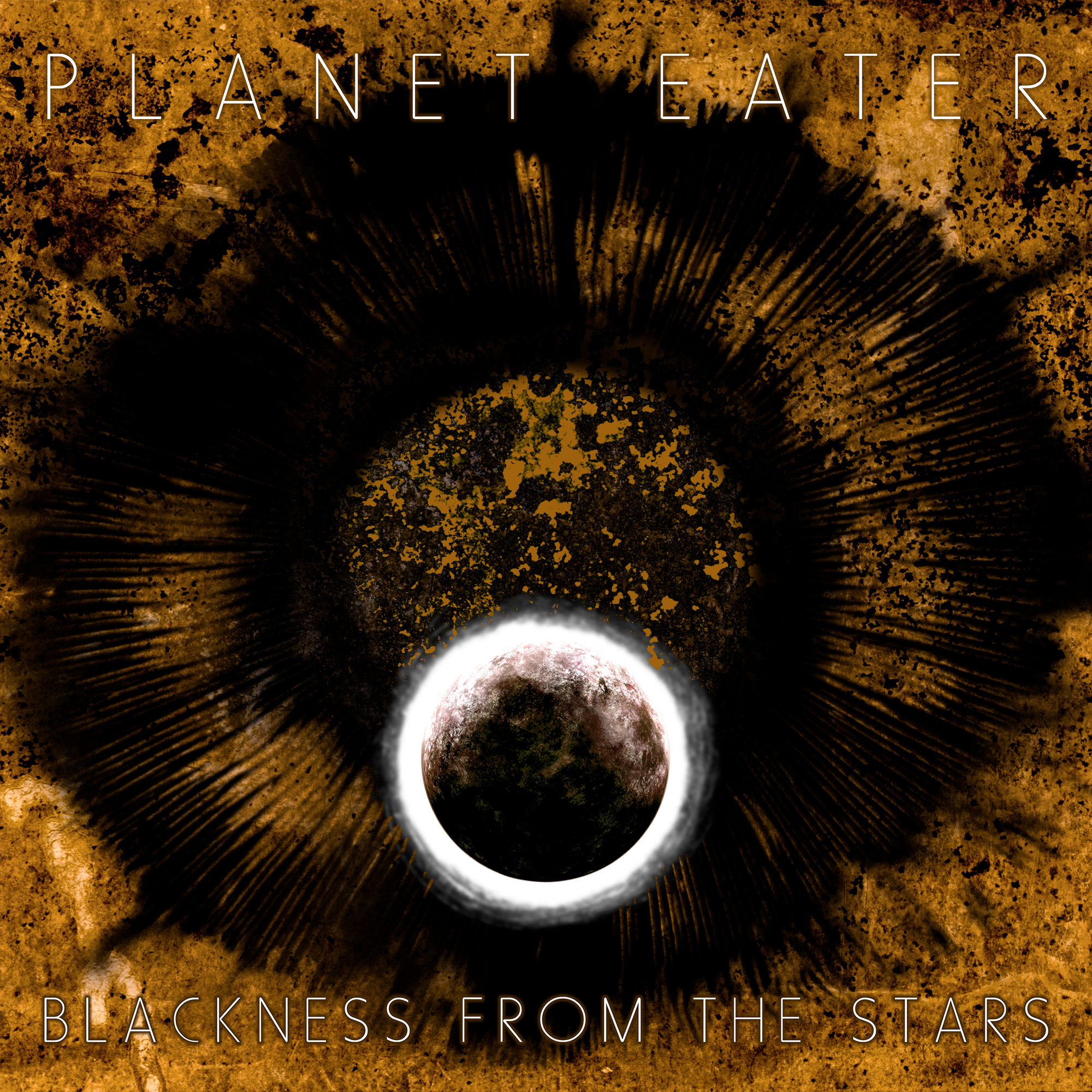 It’s difficult to imagine a villain with more scope and power than Galactus, purveyor of destruction and devourer of worlds.  He can transform matter at will, drain planets of their energy, and shatter solar systems as if they were Styrofoam models.  Really, if you think about it, it’s the perfect alias for a metal band – and Canadian outfit Planet Eater has embraced this moniker with their debut full-length album Blackness from the Stars, overwhelming the senses with wave after wave of sonic destruction.

Planet Eater dishes up a cornucopia of different metal styles, with the foremost being death and thrash, accentuated with a dash of hardcore.  Picture the groove and relentless fury of Meshuggah, couple it with the manifold chaos of The Chariot, and tie in the abiding energy of Gojira, and you’ve got a picture of something what the band sounds like.

The soul shattering journey begins with “The Boats,” a blistering song that weaves toe-tapping riffs together with syncopated drumming to impart a lasting first impression. The ending of the song is a sonic roller coaster, with chainsaw-esque, surging guitar riffs framed by lead singer Donovan Turner’s growled warning:  “Get to the boats!”  Message delivered, loud and clear.  While “Pile of Bones,” lacks none of the impassioned energy that was delivered in the first track, the second offering on Blackness from the Stars feels a bit unfinished.  There’s a lot of guitar posturing, but nothing ground-breaking.

“Cold Confines” confirms that Planet Eater was only sleeping for a moment.  There’s a delightfully frantic tone to this song, and the vocal delivery is passionate and varied.  The song also delves a bit more into hardcore territory, with a standard two-step rhythm.  There’s a strong Strapping Young Lad influence in the percussion and guitars.  “Lies Evolution” ejects the listener from their safe haven with an inspired opening riff.  Guitarists Luc Hart and Devin Ubel both shine on this track.

The midpoint of a record is often the most important, as many bands lose focus.  Not Planet Eater.  The first time that I listened to “Suffer What They Must,” my ears swiveled and I had to double check that I was still listening to the same band.  It begins with a thumping, groovy bass line, segues into a drum crescendo, and artfully uses breakdowns mid-song.   Turner sounds as if he’s in pain (you know, the chest-burster about to pop out of its alien host kind of pain) as he screeches and gurgles with abandon.  There’s also some atmospheric riffing and a ritardando at the end of the song that speaks of canny musicianship.

“Kill On Sight” is a blistering track that clocks in as the shortest song on the album.  It’s probably a crowd pleaser on tour, but comes across as a bit anemic in scope and tone.  Blackness from the Stars continues with “A Fault to Fix.”  The song suffers from a lack of focus for the first half, and it’s one of the more forgettable tracks on the record.  “The Spoil” showcases a brilliant percussion line juxtaposed against a groovy bass riff, and if Planet Eater can maintain their craft at this level, they will undoubtedly have immense success.  You can sense the passion and heart in “The Spoil.”  The Meshuggah inspired groove in this song is a heap of metal goodness with a slathering of melodic bliss.

The end draws near.  Chug, chug, chug.  The sound of a guitar, the calm before the storm.  The sky darkens, the earth beneath you shakes.  Beyond the horizon, you can see a shape moving, enveloping the heavens in its corona-stealing embrace as it reaches out to grasp the sun.  Dissonance, texture, melody – your senses are ensnared as you listen to the title track, “Blackness from the Stars.”  Who knew that the apocalypse would come at a half-paced, epic metal groove?  But it works.  While lacking some of the fury present on the rest of the album, “Blackness from the Stars” is a commanding finisher.

It’s refreshing to listen to a band that knows how to mold influences and make them their own, rather than spitting out uninspired garbage.  Sure, there are some flaws on Blackness from the Stars.  The album gets bogged down in a few places, but each time Planet Eater revives the listener with a breath of fresh air.  If you like your metal heavy and unapologetic, with just a dash of melody, then Planet Eater is for you.  And if Galactus was to look for a soundtrack to listen to as he plundered the universe, he’d have to look no further than Blackness from the Stars.