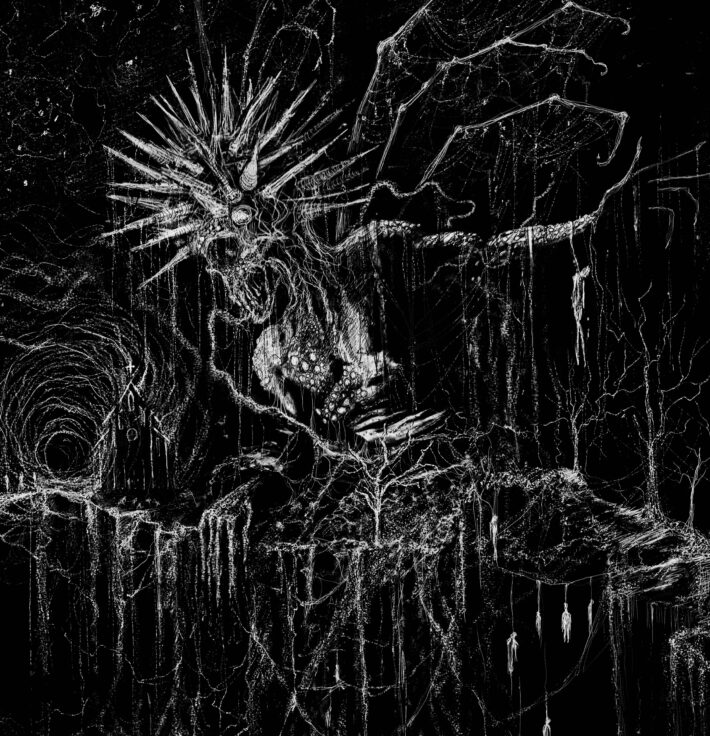 Omegavortex is a young German black/death band formerly known as Ambevilence, who released their excellent full-length debut, Black Abomination Spawn, last year. Pious Levus are a similarly aged black/death band from Texas who released their full-length debut, Beast Of The Foulest Depths, in 2018. By their powers combined, they bring us this split release on Invictus Productions. Ideally, this split would show a smothering, disgusting onslaught of dissonant black/death that pushes the edge of listenability followed by crisp punch to the throat from a focused beast. This split could have showcased the unique strengths that these bands bring to the table. Unfortunately, that doesn’t quite happen.

The split starts off well enough. Omegavortex continue their path from Black Abomination Spawn, creating twisted and dense music that focuses heavily on atmosphere without sacrificing the actual music. One issue with this style of music is that bands can focus so much on their tone and on creating a dark sound that they forget to actually write interesting music. Not so with Omegavortex. Underneath the layers of painful fun lies a bubbling sea of good decisions. The drums stand out as way more entertaining than they need to be, with a variety of beats that only sometimes rise above the chaos above. The guitars similarly shine, with interesting and full songwriting that always feels intentional even when it’s second to the band’s atmosphere.

My biggest complaint with the Omegavortex half of this split is with the tone. The band succeeds at creating a thick gunk surrounding their performances at all times, which complements their hectic and full songwriting style perfectly. However, the guitars sound too bright, and the thick gunk doesn’t always feel as effective as it should be. Listening to the first half of the release should sound like being dropped in a vat of boiling and viscous fluid. Instead it feels like watching from afar as a slimeball roll down a hill, gaining mass in the process.

Then the Pious Levus half starts. This shouldn’t have followed Omegavortex. Their sound is less cohesive, with the various instruments sounding less like a band playing as one and more like individual instruments that were recorded separately. And while doing so isn’t uncommon, I always prefer it when bands either at least make an attempt to sound cohesive or do something interesting with the isolated production approach.

The bigger problem is Pious Levus’s songwriting. Going second on this split makes them seem worse than they actually are. They play a simpler style of black/death with less crazy riffs and more direct song structures. Unfortunately, Pious Levus don’t effectively revel in simplicity. Instead they sound like a band that didn’t really flesh out their songs or think them through. Even the little flourishes on the riffs or the breaks in the drum pattern feel stapled together. I think that this was all an intentional stylistic choice, but oh boy does it flounder in my ears.

Pious Levus’s performances buoy them up a bit, at least. The singer sounds like he’s having a great time, and while I find their riffs boring the band plays them with a complementary variety of tones and enough busy work in between the main notes to show that they can really play. One advantage that Pious Levus has over Omegavortex here is that the bass plays a more visible role, leading to a fuller sound. Finally, the drums provide extra emphasis the band’s head-into-a-brick-wall approach to death metal, and do so with some impressive changes in prominence: Occasionally providing a powerful blast beat that’s nearly the lead instrument and occasionally simmering down to a shadow that’s almost off-stage to allow the other instruments to shine. I wish these performances belonged to a release I enjoyed more.

Ultimately, this split would have been better off as two EPs. The Pious Levus half drags down the Omegavortex half, and the Omegavortex half makes the Pious Levus half sound worse than it would be in a different context. That being said, there is enough here for death metal fans to find something they like. If you’re into the darker, more aggressive side of death metal, take your shot.