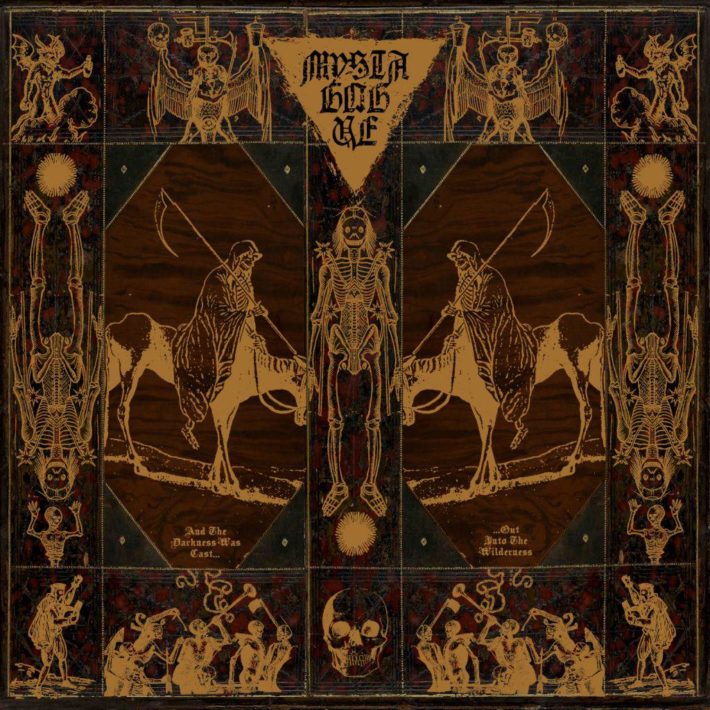 This Friday, August 30th, as summer nears its end, the Dutch black metal duo called Mystagogue releases its first full-length album, And The Darkness Was Cast Out Into The Wilderness. The band has already given a few concerts and now their music can finally be enjoyed through our speakers and headphones at home. Mystagogue has two members: Wessel Damiaen, best known from the black metal band Laster, and Maurice de Jong, best known from his black metal solo project Gnaw Their Tongues. The two have joined forces to create something great, a solid black metal record full of fast-paced riffs and killer drums.

The album starts off with Bereaved Of Light. The song opens with a light guitar intro, which after a quick build-up explodes into black metal intensity. Whereas Laster’s drumming is generally a bit more laid-back, on this record, Wessel proves that his drumming skills are on point. His drum beats are so fast and intense that the Norwegian black metal godfathers would be proud (although I doubt they appreciate any music that’s not their own ;P). The guitar work also definitely deserves some credit, since it’s not just one riff that’s repeated throughout the song, but there’s different melodies on top of dissonant chords, keeping the music fresh. Maurice’s recognizable high-pitched shrieking completes the picture, giving the record the feeling of discomfort that the album and song titles imply. Over the course of the following songs, it becomes clear that the music is actually kind of catchy. The musical style continues like the first song, but the melodies flow by in such a way that it never gets old, there’s new melodies to be heard within every song and even the drum beat is kind of groovy at times.

After three songs of despair, Here In The White Silence Of The Dawn makes room for some hope. Instead of a mournful minor chord, the song starts with a major chord, giving it almost a blackgazey ambience. Of course, there’s still a great feeling of melancholy, especially with Maurice’s almost crying-like vocals, but there’s also a certain feeling of hope. Another track that really stands out on the record is A Nacreous-tinted Halo Of Bright Sorrow. The despair and sorrow infused into the record is expressed all the more clearly on this song. It starts off with a downright depressing guitar melody, after which the spoken word vocals fortify this feeling, with a world-weary sound to them. The album’s finale, The Splendour Of Our Demise, perfectly wraps up the record. The band alternates between minor and major chords, as a result of which one passage may sound hopeful, but the next one shatters this feeling mercilessly.

In the end, And The Darkness Was Cast Out Into The Wilderness is a solid black metal record. In terms of sound, it’s influenced by the traditional scandinavian black metal bands, but the band has also created their own sound, giving the music something characteristic. The record isn’t too long, just under half an hour, but its intensity really makes up for this. As another example that the Dutch know their way around black metal, Mystagogue really deserves some attention on the international field.