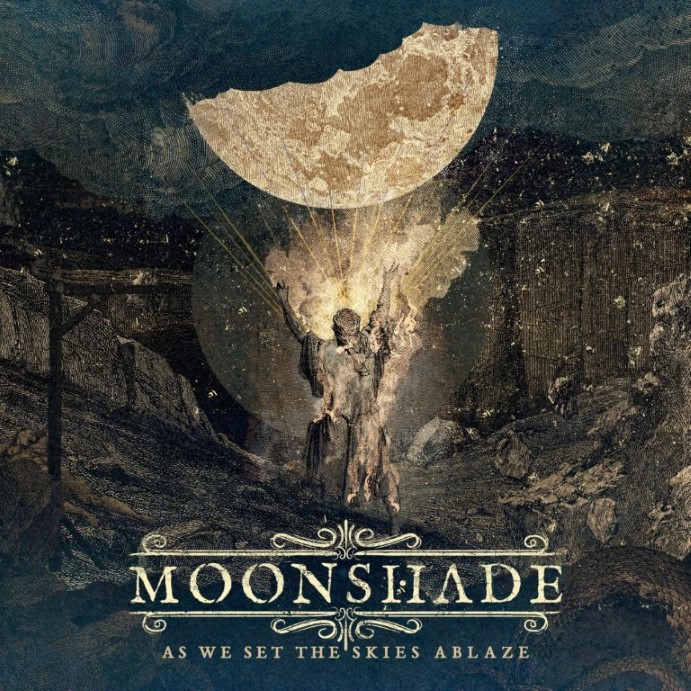 Moonshade are a Portuguese melodic death metal band that play a form of melodeath so vibrant and pure that my brain constantly tries to re-categorize their music as power metal. As We Set The Skies Ablaze follows 2018’s Sun Dethroned as the band’s only full-lengths, although they’ve given us a collection of EPs and a live album as well. Moonshade’s apparent running theme of sun-related album titles fits their music well: This is bright and fiery, but if you look too close you may be disappointed.

From the beginning of opening track “Epitaph,” the vocals of Ricardo Pereira stand out like blinding car lights on an empty beach. These death metal growls are so full of passion and so over the top that they don’t just distract from the rest, they inevitably become the only focus. This should be annoying. These vocals should be immersion-breaking and ridiculous. While they do end up being ridiculous, it is in an endearing manner. This is far and away my favorite element of As We Set The Skies Ablaze. There are some clean vocals as well that usually end up being a weak point of whatever track they’re on.

If you haven’t figured it out yet, Moonshade pours excessive energy and effort into every track. “Blood Of The Titans” is a good example of what works at the core of this record: reverb-drenched twin guitars under the previously-mentioned ridiculous vocals, a bass line that provides some depth without reducing the scorching brightness of the band’s sound, and drums that sound more focused on fun fills than worrying about playing typical death metal beats. The foot is on the gas pedal, and the car will keep going until it runs out of gas.

All these pieces fit together well. Moonshade have apparently been playing together since 2010, and from their sound I can believe it. This group plays tight music. This makes otherwise boring riffs sometimes work well, such as passages in the two to three minute mark of “The Shadows Of My Dissent,” which sound much more full than they could have sounded simply because the entire band is clicking and feeding off of each other’s energies.

This is almost enough to cover up my issues with As We Set The Skies Ablaze. Unfortunately, some of the less great aspects of this record break through the wallpaper. Large sections of the songwriting are unfortunately boring. The twin guitar approach works well when the band writes for that, but too often both guitars are just chugging along or on a single note. The drums sometimes sound fun and sometimes sound like this could have been a drum machine. There is a void near the center of this record, as if Moonshade made a gold-plated strawberry and then sucked the strawberry out through a pinhole.

The core of this problem is the riffs. Some are quite good, such as the opening line of “Artemis,” but most add nothing. The opening minute of the title track highlights this. I try to grasp onto something to stand out from boilerplate power/melodeath, and all I get is the occasional syncopation in the vocal line. Too many bridges and breakdowns end up just being a blank pile of nothing. Moonshade may have spent too long on auto-pilot. They sound like they’re trying to do a “Keep It Simple, Stupid” approach to writing their music, but didn’t do it well enough to keep it interesting.

Moonshade has excellent energy, but they need to support it with more varied songwriting and a more consistent effort towards providing solid riffs. I didn’t hate As We Set The Skies Ablaze, but this isn’t a record that will stand out over time. If you’re looking for high energy and honest melodic death metal or power metal, take a swing at Moonshade, but for others this will be inoffensive and forgetful.