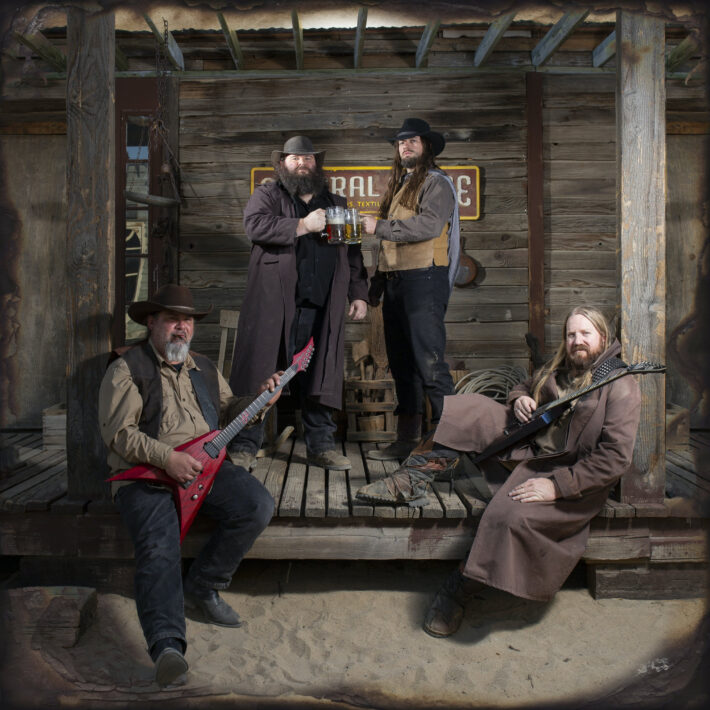 The green room at Aces High Saloon is akin to a smuggling compartment left over from the prohibition era, under the main floor of the bar and tucked away down a steep staircase of creaky wooden planks. I have to duck my head as I descend to avoid a collision. The area below is unfinished, with exposed wooden studs where the walls would be filled in, and concrete floor. Piles of bar materials are stacked up in corners, and in the largest space a well-worn couch surrounds a coffee table bearing complimentary beers for the band members. It’s charming in what it says about the venue itself, that means (or lack thereof) are no obstacle in getting live music played. Four groups will perform tonight, and last of them is Helsótt, the headliner from Menafee, California. They’re promoting their new record, Will and the Witch. I speak first with Eric Dow, the lead vocalist, and soon Cooper Dustman, drummer, joins us, followed by Mark Dow and Pete Truax.

Eric Dow: We were at the Metro in 2017. The club became a trans bar early in the night, so we played an early show and had to get out for all the dancers, but our bus call wasn’t until three in the morning, so we got to drink and party with all the trans people. We had Netherlands guys on the tour and they were all about it, drinking with us, and we had Russians with us on the tour, and they were not about it. So we were fucking with them the entire time.

C: Anything interesting from this tour?

ED: We’ve had some good shows. After Portland, we went to our old guitar player’s house. He had moved up to Portland and he came out to the show and invited us to stay at his place, and it’s like a rural area. Nowhere to park, so we pulled up in front of his apartment close to ten or eleven at night, and we had the hazard lights on while we were trying to park, and there was this crazy lady downstairs, yelling at us like, “You motherfuckers! You need to get the fuck out of here! Get your drugs out of here!”

Mark Dow: And we told her, “We don’t have any drugs!” And she was like, “Bull shit!” Next thing you know, the cops showed up.

ED: But that was the best thing that happened to us, because they showed us where we could park. The only reason they were out there was because she had called them and said someone in a mask was trying to open someone’s door out there, to break in. So she asked me if I had seen anyone out of the ordinary while I was out there—and I had just seen somebody run out into the field, but he didn’t meet the description at all of what she was saying. So we got done talking to the cops and got back to the car, and I told Cooper that they got that call, and he was like “Uhhhh…”

ED: So the cops were getting back in the car and I ran back to tell them we cracked the case.

MD: The masked bandit is…

CD: I just have a beard, I wasn’t even wearing a mask!

CM: You guys are on your way to Europe next, right?

ED: Not right away. They have the HRH Viking there in England. It’s a big record station out there called Hard Rock Hell. They do four or five festivals a year, and in December, when solstice starts, they always do a Viking Metal festival. They invited us to come out, and we got three or four of our friends’ bands playing from out there that we haven’t seen in years, so we’re really fucking looking forward to it.

CD: First time in England, too.

CM: You guys did Wacken a while ago, that’s got to be huge.

ED: It was huge. Then COVID. We were running as hot as we’d ever been, had the best momentum going that we’ve ever had. Now here we are, doing the west coast grind.

CD: But we wrote an album.

CM: It’s old west metal. There’s not a lot of western metal themed stuff at all.

ED: There’s a few bands out there, but they’re not doing what we’re doing. To say we’re shattering windows and breaking new ground, I wouldn’t say that, but we definitely do it our way, and it’s different.

CM: Metal is loaded with Scandinavian viking stuff, mythology, why do you think that has become a huge theme in metal with so many of the bands playing today?

CD: When it comes to the metal of the era of the late 90s-2000s, there was this hybrid force going on, where people were sick of just doing black metal or death metal, or thrash. And you had bands that were fusing two of those, like black n’ roll, or blackened death, you started seeing these combos. And then you had these European folk metal bands using their culture and their local instruments to make music on top of their influences, a lot of which were American metal. Metallica, Megadeth, death metal. So with Pagan stuff, you get all of it. The power, the thrash, you get the death, the black, it just depends on how the band wants to go about it. You can hear the influences, but it enables you to make a new sound, or at least try to push it in a different direction, not just one category or the other.

CM: I noticed that while listening to Will and the Witch, that you have this fiddle sound in the old west, and you hear the crossover, because a lot of that fiddle/old west sound came from Irish immigrants who had Celtic folk music in their past.

ED: Exactly. There’s a band called Cruachon from Ireland, and they take a lot of those songs and jig-type folk tunes, and put it in theirs.

CD: History’s always a big part of it for each and every band.

CM: You’ve said that the movie Young Guns was a big inspiration for this album. Were there other westerns, or places, that inspired the story and sound of this record?

ED: Absolutely. If not in the story, they made their way into the feel of the writing. Deadwood, Tombstone, the Cowboys with John Wayne and the music of John Williams in the Cowboys. It’s the only movie John Wayne dies in, and you have this epic John Williams music. He’s the only guy who got to compose something for when John Wayne dies. Love the feel of that. With this particular album, we were driving to a Vegas gig, just taking in the beautiful desert atmosphere, and thought “we should do this.” And that was even before Slaves and Gods. We think about these albums really far in advance, it just takes a long time to make it happen.

CM: You’ve told an old west story now. Are there any other kinds of stories you’d like to tell?

ED: I think you could metal the fuck out of the American Revolution. But we had so much fun doing this western one, it makes me want to do more.

CD: I think it would be fun to delve more into the “ghost town” aspect of it…not just because of the warfare, but of the spiritual clashing, and there’s an energy with these ghost towns, and we could get into that darker material.

ED: That’s the thing about all these American stories, a lot of these historical figures are immigrants, so you get these stories from everywhere, South America, Africa, Europe, and that crossing over, including with the only ones who aren’t immigrants, the Native Americans, is what makes things that are really new and unique.

CM: You guys lost an orchestrator with this album. What did you learn making Will and the Witch that you didn’t know on your previous records?

ED: We learned about ourselves, what we’re capable of as musicians, and we learned a lot about how rad our mixing and mastering partner is, Jean-Francois Dagenais, from Kataklysm. He came through so big for us. He gave us everything we needed for our shit to sound as good as possible. This album came together so much easier than Slaves and Gods, and that’s a good thing. It says something about our growth.

CM: How has your experience with this album affected your work in the future?

CD: Someone called us a western metal band after this. We’re continuously discovering who we are.

ED: I liked that a lot. I’m sick of getting called “Vikings from California.” There are pyramids in our stuff, Greek tales, Homer.

CM: People love, in metal, putting every band in as small a box as they can.

MD: We don’t fit in one box. We’ve always done whatever we want to do. Doesn’t matter what critics or even fans want to put us in. We follow our instincts, our influences, and just play what we feel.

CD: That came out in the new record. We streamlined, and centered in on that one thing that defines us, that one sound.

MD: It’s just us. It’s Helsótt. It was written by all of us, and it’s who we are. And we came together and all did it together. It’s an amazing experience.

Will and the Witch is now available for download and streaming on all major platforms.