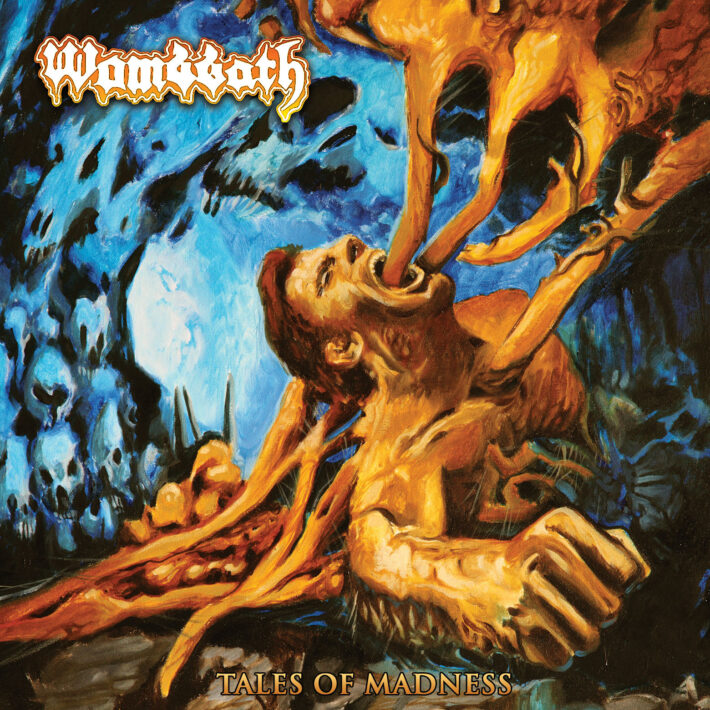 I’ve gotten into too many arguments about intentional failure. Usually concerning either black metal or Kanye West, someone will state that I’m underrating the music because my issues with it are misguided. “No, that’s not a flaw with their sound,” these non-hypothetical-yet-anonymous-for-the-purposes-of-this-review people say. “The artist meant for that to sound that way!” Unfortunately, shooting oneself in the foot hurts, even if you do it on purpose. On this not-at-all-ominous note, we turn to Wombbath and their new(ish) album Tales of Madness.

Wombbath have been around since the 1980s, and play a brand of death metal that calls back to their early days. Despite their ancient track record, they took a long break and as a result this is their fifth full-length release. Tales of Madness combines re-recorded songs from their first go around with new material. Re-recording 1980s music after a reunion seems to be all the rage currently (looking at you, Mr. Bungle), and Wombbath aim to capture the fire of the early years of their genre.

The production on Tales of Madness will probably end up dividing its fans. As this release contains a mix of new material and older songs, Wombbath made the choice to completely smooth over the production and give all of the tracks an older feel. For some, this will surely be a plus. This album will sound grimey to them. It will remind them of an old cassette tape demo they listened to in their 1991 Geo Prizm after high school. Outside of pure nostalgic value, the production also adds a no-nonsense feel to Tales of Madness. This is raw death metal, take it or leave it, and any frills have been burned away long ago.

With all of that, it sounds like Wombbath recorded this album in a tin can to me. My biggest problems lie in the guitar and drum tones. The drums sound underwater and 10,000 feet away, the guitars remind me of a go-kart. People will complain about lo-fi black metal, or low production value in metal in general, but whatever your thoughts on those arguments, the production choices made of Tales of Madness are just bizarre to me. Despite my complaints, the songs do sound crisp, and this style seems intentional. The only conclusion that I can come to is that the members of Wombbath just really like go-karts.

Beyond the production, the music is a mixed bag. I mostly enjoyed the riffs. They were simple and enjoyable. Wombat clearly knows when to move on: the album as a whole lasts for about 36 minutes, no songs feel like they dragged on, and within the songs, even the riffs move on before they drag the music down. Even with this, however, “enjoyable” was the cap.

The rest of the music felt like I ate an entire plate of nothing. It wasn’t bad, it didn’t offend, there was just nothing out of the narrow range of fine. Maybe this comes from a desensitized place, and this music would have sounded incredible propped up next to its 80s and early 90s peers. Maybe. If so, then age has taken its toll. That also doesn’t address the new material, which fits in very well with the older tracks in sickness and in health. Ultimately, I could have forgiven and even come to enjoy production and its, er, charm, despite my earlier whining. I needed the songwriting to add to that charm. Instead, it remained out of the way, and my problems with the production consumed my experience.

Tales of Madness made me wish I was listening to other death metal bands. Luckily, this album’s fans will like this for the exact reasons that I don’t. If you find the production a selling point rather than a knife in the album’s back, then you’ll have a much better experience than I did. In that case, this album’s all yours.