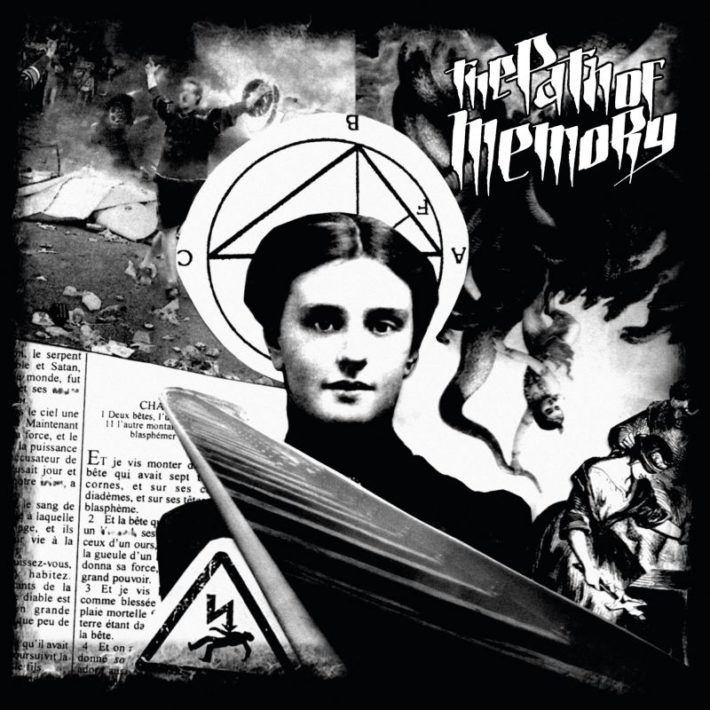 Much to the purist’s chagrin, black metal seems to function really well when coupled with certain non-metal influences. Specifically, today I’ll talk about post-punk. You can find plenty of flirting between the two already in some instances of 2000’s depressive black metal. The affinity for mid-tempo and sombre melodies proved they were almost made for each other, not to mention both post-punk’s and black metal in general’s penchant for simple rhythmic repetition. Things came to a head with Neige’s infamous Amesoeurs project, a (sort of) successful blending of the two genres. Not long after, shoegaze was added to the mix and blackgaze became a recognized genre. Today fusions of black metal and post-punk are not hard to find at all.

But what if we started from a different perspective, going post-punk first? Well what I have for you today is The Path of Memory, a project from a black metal veteran (doesn’t say who) who decided he needs some respite from blast beats and tremolo riffs and create an earnest and heartfelt gothic rock/deathrock/post-punk album. There’s no blitz-fast metal here. It’s all gloomy rock songs. Yet this is obviously made by someone with history in black metal and someone who has a very good idea which elements he can import from there to create his own unique spin on the dark rock sound.

Indeed, when the reverb-drenched guitar switches to distortion, you’ll immediately recognize the familiar gnarled fuzz, a characteristically black metal guitar tone. Some melodies and atmospheres sound like they’re straight from a DSBM record. The beginning of the second song, “Rancid Song”, with its buzzsaw guitar and dramatic synth sounds like its about to devolve into blast beats and shrieks. Yet it doesn’t. The album never just devolves into pure black metal for lack of ideas or inspiration. Path of Memory is dedicated to making dark rock music and black metal elements are merely a tool here. And it works really well. Black metal was always very apt at evoking the darkest, most desperate states of mind and since this was clearly intended to be a very dismal record, it’s used to great effect.

Dynamics are also key part of this album. “Don’t Worry About Me” aptly builds from sparse to denser arrangements before retreating again to close the song. “Rancid Songs” knows when to let the deep vocals be alone with the guitar and when to let the whole arrangement roll. Then there’s songs like “Truth”, “It Hurts Me” and especially “Oppresse de rentrer” which are composed of nothing but sombre, reverb-drenched guitars and sparse, dejected singing. But then there’s songs like “I Tried and I Failed” and “Alone, Alive” which can be described as “going hard”, at least in the context of the album. In short, there’s a decent variety of songs which never stray far from the base approach. The album is thus both coherent and variegated, keeping the vibe stable throughout while keeping it interesting.

It is thus an album that’s very easy to listen fully throughout. I’ve never felt the need to stop it and put on something else. In fact, owing to a relatively short runtime (34 minutes), I often found myself surprised that it’s over already. But don’t think it’s just its great composition that achieves this. The atmosphere of it all is very apt at sucking you in. It’s obvious that the songwriter put a lot of his own heartfelt and honest emotion here, and is very apt at carrying them over to your own mental state. As I said, it’s a very sombre album, at the same time laying bare the feelings of the author but also shying away and obscuring his voice behind layers of effects and restrained instrumentation. It shows both the deepest feelings and the difficulty of expressing them, the pain and anxiety contained within. In short, the effect is akin to the best of depressive black metal or deathrock records, holding up the mirror towards the listener to let him explore his inner sorrows.

As a debut album and an experiment in something new, “Hell Is Other People” can be declared a successful effort. It does feel a bit like it was an attempt to feel out the territory for starters and that a lot more could be done with the sound, but I believe the author has convinced himself that there’s great musical potential here. Hopefully, we’ll se more from The Path of Memory and I believe it’ll be taken to even greater heights next time around.

Click here to visit The Path of Memory’s Bandcamp