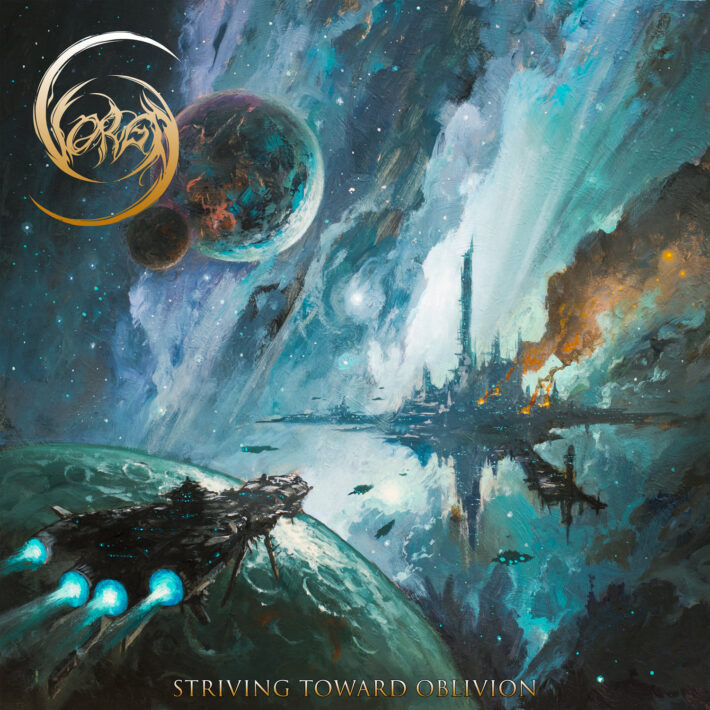 Vorga are a German black metal band whose music is equal parts melodic and atmospheric black metal. Striving Toward Oblivion is their debut full-length release. Their approach to black metal involves heightened intensity, clean production, and heavy repetition to reinforce melodic power. On Striving Toward Oblivion, the band’s path to success involves invoking an emotional response and letting the music’s simple moments act as glue rather than as a songwriting weakness.

Striving Toward Oblivion starts fast and furious. The opening riffs of “Starless Sky” let you know exactly what type of record this will be. Memorable, ferocious riffs fly over and under incandescent vocal lines. Vorga know their strengths and how to leverage them. This album is fast, it’s relentless, and it gives answer to any obstacle by adding more tremolo and howling. Even though the second track, “Comet,” goes forth at a slower tempo and with some softer moments, occasionally even forsaking blast beats, the intensity that Vorga use to kick in the door never disappears.

The sci-fi themes of Striving Toward Oblivion may invoke technical death metal, but such specters barely even haunt this record. These songs sound smooth and straight-forward. Melodies pulse with consistent, rhythmic allure, and songs routinely sacrifice glory for a chance for a good headbanging moment. The chord progressions never stray from what works. Instead, Vorga have gambled that you won’t care if a particular transition keeps happening, or if some passages repeat themselves one too many times, because you’ll be busy swimming in the cosmic fires that they have created. For the most part, their gamble works. I certainly noticed some issues with the song writing, but only rarely did these hiccups impact my enjoyment of the record.

Individual passages repeat and sometimes lack substance, but overall song structure takes the listener on a journey. I get frustrated with the band’s tendency to stay on a note and pound it into the ground, but Vorga flesh out the macro aspects of their sound with great success. Fitting for a band writing about space, I suppose. Tracks don’t feel formulaic, instead they feel like a natural and detailed progression of sounds. Individual passages tend towards being repetitive, but as you zoom out it all works.

Most flaws in records like these tend to occur generally throughout the record: if a singer is flat, they’ll probably be flat on every track and not just on specific notes, if the band can’t write a riff they won’t suddenly gain and lose the ability halfway through the record, those sorts of things. Striving Toward Oblivion contains some very specific screw-ups that make me wonder what happened in the production process. In “Stars My Destination,” the drumming starts to sound a little off over a minute in. Not a big deal. But as the song goes on, it gets worse. By 1:45, it starts to impact my enjoyment of the song. The drums sound slightly out of time, as if the tracks were cut and pasted ever-so-slightly off of where they should have been. Sometimes it’s noticeable, and sometimes it isn’t. Sometimes the guitars will give a little hiccup. This culminates when the music fully cuts out for a beat just as the track reaches the 5 minute mark.

I do not care about production perfection and often will not even notice issues that I see other people complaining about. But this weird silence absolutely destroys the song.The version on bandcamp has an additional 45 seconds that I don’t have and that isn’t listed on metal archives, so I guess they caught this and fixed it at the last minute. If I had noticed this earlier, my experience with Striving Toward Oblivion may have been different.

I considered taking those last two paragraphs out because this specific problem won’t affect most people, but this issue altered how I perceived Striving Toward Oblivion and therefore my overall enjoyment of the record. I’m glad that someone caught the issue, but I kind of wish that they’d caught it a little earlier. If you listen to Vorga on bandcamp, then congratulations on listening to a better version of the record than I did.

For a broader and more relevant complaint, Striving Toward Oblivion sputters out at the end. The songs don’t get worse, Vorga’s fire and ferocity just start to wear off. By the time the record ends, I’m ok with it. The fast, melodic blast at the beginning of the album turns into yet another overly repeated note with the same tone as all the others by the end. Striving Toward Oblivion never sounds bad, but it definitely loses its shine.

Striving Toward Oblivion is a solid atmospheric and melodic black metal album with its own identity and strengths. My biggest issues with it have apparently already been fixed. Although Vorga still have some issues to work out with their songwriting and ability to let a good thing fly free, they still accomplished all they needed to here. Eventually. I’d recommend this to everyone who complains about atmospheric black metal being boring and too long, and to anyone who’s looking for energetic meloblack.