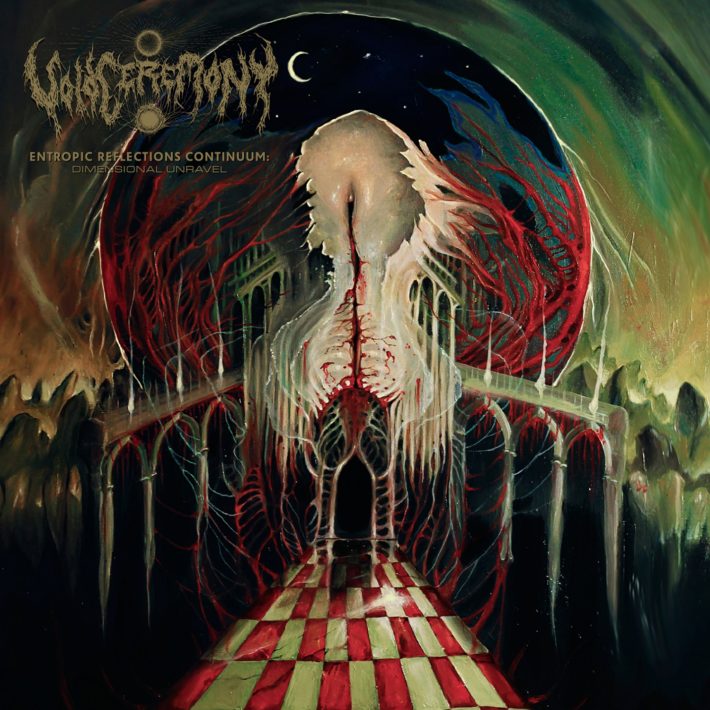 Finding a debut album that you like is always exciting. The sense of rooting for the band, of being able to follow a band as they grow and evolve and hopefully explode into the greater metal scene, adds something external to the music. Sure, in the case of VoidCeremony, the band members have been in a multitude of previous projects, and the band itself has already made three EPs over its long road to the debut full-length release, but still. My brain doesn’t care. The excitement I felt for Entropic Reflections Continuum: Dimensional Unravel  is real.

VoidCeremony are a Californian death metal band formed in 2013. They lay on the dirtier side of the genre, although not excessively so. Fans of Tomb Mold who skip the review to watch the youtube video below just because the link said “FFO: Tomb Mold” and then came back up here slightly confused may feel slightly disappointed by this lack of excess. Even so, the connection between the two bands is there, and it may be more apparent for those who are not neck deep in their chosen subgenre. Captivating guitar-work also connects the two bands.

VoidCeremony leans heavily on two main pillars to maintain the listener’s interest throughout their debut, and there is seemingly no backup plan for making this music worthwhile if these foundational elements start to crack. Luckily, that doesn’t happen. The first of the two pillars is riffs. Riffs form the backbone of death metal in general, but some bands lean into the almighty riff with an extra level of enthusiasm and zeal. VoidCeremony is one of those bands. The riffs, from beginning to end, are great. There is nothing too transcendental here, but everything feels dynamic and gripping. Some bands have a knack for making two or three note patterns engaging, and VoidCeremony seems to be one of those bands. Sometimes they go farther and create more intricate riffs, but never lose themselves in the mist. There is plenty of headbanging to be had on Entropic Reflections Continuum: Dimensional Unravel, and I enjoyed every minute of it.

Part of why the riffs works so well is VoidCeremony’s willingness to change whatever they need to on a dime. They never stick with a riff past its due date, and they shift tempos rapidly and abruptly whenever doing so serves the music. They also don’t show any sense of worry about whether or not a passage will be adequate within the world of death metal. The aforementioned two or three note patterns don’t usually register as “riffs” to my mind, but they are what the music needs to remain interesting in virtually all of the instances they are used. What should work doesn’t matter, all that matters is what does work. It takes a certain level of humility to write music that way. I don’t know the members of the band, so I won’t comment on their personalities, but they are able to commit to that humility in their songwriting.

The second pillar of Entropic Reflections Continuum: Dimensional Unravel is the atmosphere. This isn’t a full-scale cavernous death metal, and VoidCeremony aren’t married to that specific atmosphere but the band has definitely gone beyond flirting with the subgenre and are at least at second base. In any case, everything here is a bit grimy and a bit crunchy, without interfering with my enjoyment of the other parts of the album (such as the sweet, sweet riffs). Sometimes bands use their intended atmosphere as a crutch and hope it’s enough to make things interesting. Typically the crutch snaps in half and the music collapses in a motionless heap when they do that. Here, Voidceremony leans hard into the atmosphere, but not to the breaking point.

My biggest complaint is that this release is too short. The experience feels incomplete, or like a demo. When I’m done, I can’t help but feel like there was a song or two missing, and I had the same thought in my mind every time the last sounds left the speakers: “That’s it?” As far as complaints go, this is much better than the album being too long and featuring a bunch of boring filler. However, something still seems off. Part of why the album succeeds as much as it does is the incredible focus that each song, each passage, and each riff are able to maintain. But the cost of that focus is that the overall picture seems to be missed. Transitions sometimes feel a little disjointed, and I think that is part of the same problem.

VoidCeremony have created a great little experience as their debut, and my issues about it are more about what they didn’t do than anything they did. I’m looking forward to their future releases quite a bit. If you’re at all into the darker, more teeth-bared side of death metal, check out VoidCeremony. They may have something for you.