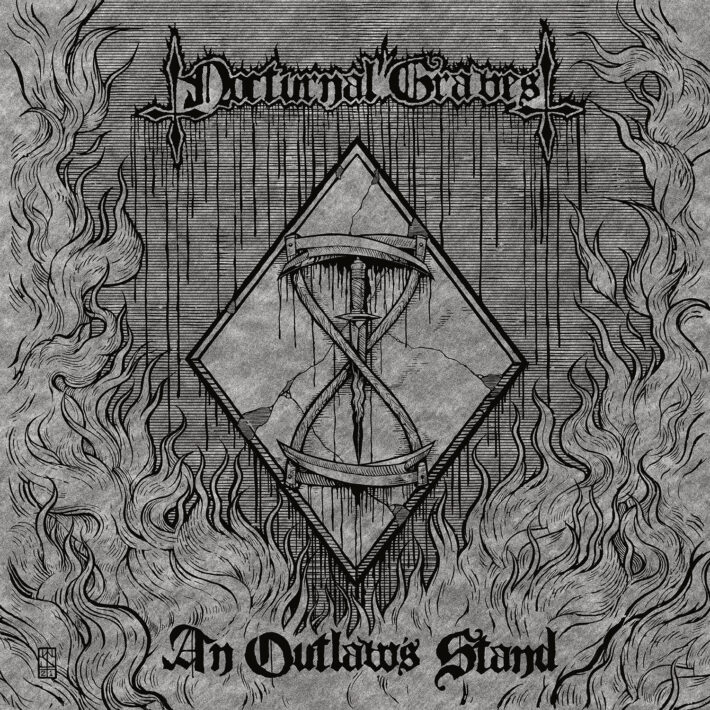 Nocturnal Graves are an Australian blackened thrash/death band with some gray hairs and a matured focus on riffs. The band has existed since 2004, and will soon release their fourth full-length album, An Outlaw’s Stand, to stand alongside a bevy of EPs and demos. The group features past members from groups like Destroyer 666 as well. They don’t ask the listener to cast aside any preconceived notions, or to journey in any unexplored territory. Instead, all you have to do is appreciate the riffs and let Nocturnal Graves’ aggression take you along for the ride.

An Outlaw’s Stand starts with nothing. Creepy ambient noises slowly build until punching drums give way to an exciting death metal riff almost ninety seconds into the track. From there on, clean sailing and wild sounds reign until the album ends. I’m torn on this intro. On the one hand, some variety lets the band stretch a little, even if it does come right away. And this certainly does a good job of setting up a dark and unsafe atmosphere. However, I’ve heard it a thousand times before and I will hear it a thousand times again. I don’t hate the lack of originality elsewhere on this record because it’s frightfully entertaining, but the first moments of An Outlaw’s Stand make Nocturnal Graves sound like an unsure, second-rate death metal band who have to fall back on the worst genre tropes to obtain any relevance at all. And that first impression does not do them justice.

Stuttering, pulsing, and dragged out riffs fill the rest of the album, and I love them. Not a lot of variety in the tone or the songwriting tricks, but every one feels so, so satisfying. The solos do wonders for each track as well. They sound like less attempts to be impressive displays of technicality or musicianship and more shrieking, warbling messes that further the nasty aura that Nocturnal Graves can serve up. The band hasn’t written complicated music, but they have written aggressive and confident melodies. That’s all I need.

The drums stand out. Every time I listened to An Outlaw’s Stand, I found myself at some point distracted by how much I loved their tone. I can’t tell what separates these drums from every other blackened-whatever band out there, but they’re performed masterfully and come close to stealing the show at times. The production helps as well. An Outlaw’s Stand sounds full and every note pops with distinction.

All that being said, I struggled to find time to listen to An Outlaw’s Stand. Partially that’s the time of year, but partially something more serious lurks here. Nocturnal Graves sound excellent, their songwriting abilities are top-notch, and I enjoy every song, but at times it feels like just another record of this style. Because the tracks are too similar at times, there aren’t as many standout moments, either. Aggression flies out of An Outlaw’s Stand and into the listener’s ears, but not enough to give me a strong emotional attachment to this record. So we’re left with another competent black/thrash/death metal record. I could go listen to Earth Rot or Oxygen Destroyer whenever, or even return to some of those old Destroyer 666 records for greater fun. An Outlaw’s Stand is so well made that opportunity cost is it’s biggest flaw.

Nocturnal Graves starts the new year off well. An Outlaw’s Stand does well by the band’s listeners. I’d recommend this to anyone who starts salivating at the thought of aggressive music, and I have the suspicion that some people will jump on this album with much more enthusiasm than I did. This one might stick around for a while.