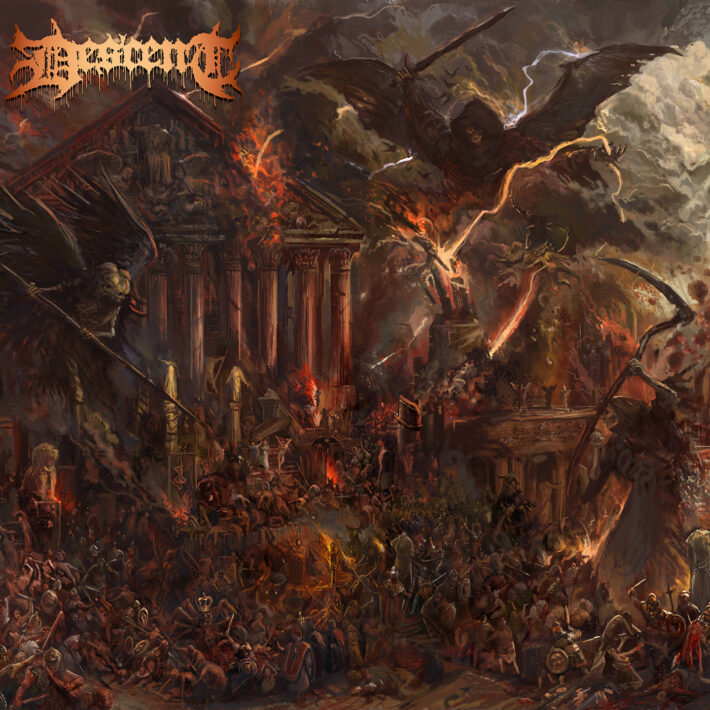 If you read my previous reviews, you might associate my writing with long, descriptive sentences and flowery adjectives. Well, this one’s going to be a little different. Much like Descent’s Order of Chaos, let’s get violent.

Australian death metal band Descent entered the scene with their first demo in 2015 and released a debut full-length in 2018. The band consists of members of the Brisbane extreme music scene, where they also play in blackened death metal band Snorlax, grindcore band Necroseptic, black metal/crust punk band Skoptsy, and black metal/grindcore band Consumed, among others. Despite some of these groups having only released demos, you could hypothesize that the extreme metal and hardcore punk scenes in Brisbane are closely connected, if not intermixed. Listening to Descent’s music will no doubt support that theory. Allow me to elaborate.

This record is a monster. The promo material claims that “Order of Chaos is a squelching war-chest of punishing death metal grindery from Brisbane… Riffs of inescapable maliciousness fueled by the great traditions of chainsaw artistry reveal gateway altars pounding a primordial blackened fury.” So maybe we aren’t leaving flowery descriptors behind just yet. But make no mistake, there is nothing flowery about this record. If you’re like me and the prospect of hardcore-infused death metal makes you recoil, I have good news for you. This record leans much more towards “hard” than “-core”, and goes all in on the violence.

The first thing you notice after hitting play is Descent’s guitar tone. It’s sharp, metallic, and grinding – like the chainsaw artistry mentioned prior. And I absolutely love it. Their tone has a full, pounding low end supported by the prominent bass that adds massive weight to every riff. There are bass-forward parts to appease the bass players out there, and the vocals are placed tastefully low in the mix. Ultimately, Descent understand that it’s all about the riffs, and they’re playing to their strengths.

On a record like this, the quality of their writing can make or break the album. I’m pleased to report that Order of Chaos is riff city, through and through, wall to wall. 29 minutes of neck-breaking, knuckle-dragging riffs. They’ve got stomping riffs, moshing riffs, headbanging riffs, and even spooky riffs. On tracks “DRAGGED” and “GATHERING” we hear some dissonant black metal-style chords in between chugging riffs to add a little blackened flair to the mix. Riffs interchange swiftly and dexterously, between various styles and tempos, and the band is always tight and cohesive. Surprisingly, there are fewer breakdowns than I would have expected – a stylistic change that I actually appreciate. Instead, Descent opt to simply pummel you over and over, not shying away from chugs that utilize their delectable guitar tone.

Needless to say, I’m pleasantly surprised. I went into this record with relatively low expectations, only having heard one of their singles on Bandcamp and thinking, “this could be cool”. Turns out it’s damn good. Their style reminds me a bit of Tombstoner but with less melody and way more violence. Ultimately, this record knows what it wants to be. It does what it sets out to do, and does it well. If you show this record to a Maggot Stomp-er I guarantee he will be throwing elbows in his room on the first song. It’s that good. I think this record is going to get people talking, and put Brisbane on the map in the death metal scene. Admittedly, Order of Chaos doesn’t do anything new. But Descent don’t care about that. They know full well that riffs are what the kids want, and they have delivered.