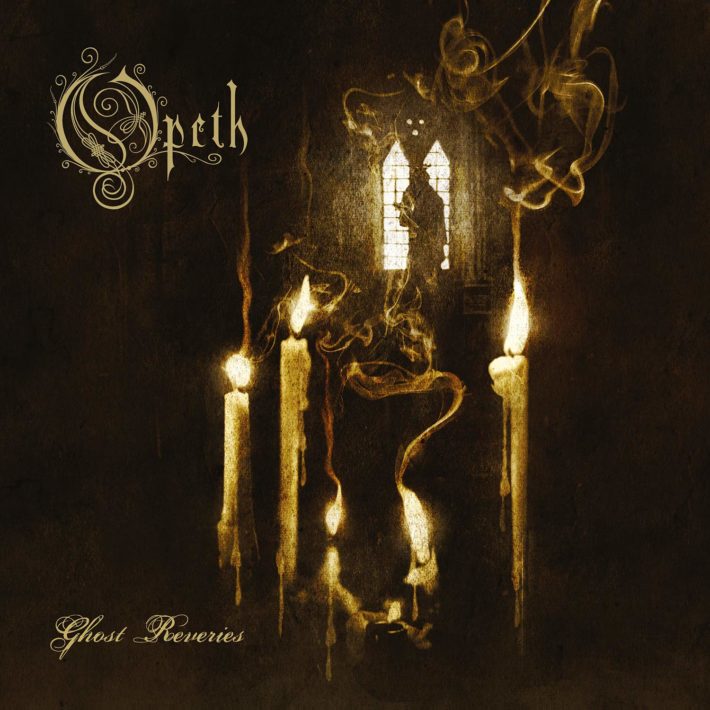 Fifteen years ago, Opeth released what many would consider their magnum opus.  After this, the band would become more and more divisive among fans with subsequent releases and their shifting sound.  But regardless of these opinions, Ghost Reveries continues to be one of the unifying factors among all Opeth fans, old or new.  The perfect swan song to the end of their death metal days.

Since their debut in 1995, Opeth have redefined progressive and metal, transforming both worlds into something new.  Each new album seems to have a new approach, a fresh idea, and a wonderful interpretation of something that has been done before.  Moving death metal into the progressive realm was never a challenging jump.  Death metal’s forefather, Chuck Shuldiner, was constantly grabbing at progressive ideas, culminating in the legendary album The Sound of Perseverance.  Technicality and melody would eventually grab hold of this genre as well, splintering it into a thousand subgenres and sub-subgenres that keyboard warriors would battle over in the coming decades.  Opeth’s unique take on this style was something a little different; the foundation was the extreme sound, but the walls were decorated with vintage art.  A seemingly stark contrast to what else was going on.

Each release seemed to perfect this idea.  Imagine the outside of a castle, haunting and intimidating.  But inside, it is filled with art created from masters long ago.  Perhaps it should belong in a museum, but it feels at home here.  Opeth became known for this.  Their songs were growing in length, chord progressions becoming more complex and intricate, songs becoming more of a wandering train of thought than a cookie-cutter, commercially viable package.  Their fans were coming from different places.  Death metal junkies became curious and prog snobs realizing that metal had potential for far more.

Of course, Opeth has always been aware of this.  After the critically acclaimed Blackwater Park, they offered their fans Deliverance and Damnation, each album exclusive to their two primary sounds.  While widely celebrated, perhaps Damnation left the death metal camp a little worried.  An entire record without harsh vocals?  Was Opeth going soft?

While that might have been a precursor for albums later on in their career, Opeth was not done with death metal yet.  So they unleashed Ghost Reveries onto the world.

Opeth’s music has always been tinged with “dark” or “haunting.”  But it has always seemed to dance around the edge of “evil.”  Ghost Reveries put that final cherry on top of the metaphorical ice cream that represents their music.  Inspired by satanic and occult themes, Mikael Akerfeldt admitted that the original idea was for this to be a concept album, about a man going through mental turmoil by killing his own mother.  From the opening track “Ghosts of Perdition,” to the distant closer “Isolation Years,” a constant theme of something sinister is lurking within.  “The Grand Conjuration” alone is a far more chilling portrayal of satanic concepts than anything Behemoth has ever done (I still love Behemoth, so hold your pitchforks).

The virtuosity of the band has never been prominent until this point.  The bass makes an early standout in the opening track on the verse, the keys declare their place in metal by laying a foundation for everyone to stand on, and the guitars become as complex and dynamic as a classical symphony.  Martin Lopez’s drumming is as close to perfection as we might get, a fitting end to his time in Opeth.  Mikael Akerfeldt’s universally celebrated growls reinforce their accolades; and like fine wine, only sound better with each listen over these last fifteen years.

Ghost Reveries does feel like an end of an era for Opeth.  It was the last one to feature Martin Lopez and guitarist Peter Lindgren.  While Watershed might be the last album to feature their signature death metal elements, Ghost Reveries feels more like a fitting sendoff.  For myself, it’s a combination of the evil atmosphere, the pristine production,  and the last album to feature that line-up.  Not to mention that this album served as my gateway into the world of these musical titans.

Fifteen years later, this album has absolutely earned the honor of being considered a “classic.”  In a recent Youtube video, drumming maestro Mike Portnoy stated that this album is “his favorite Opeth album.”  While the opinion of one man doesn’t determine the status of a piece of music, he happens to reflect the opinion of many listeners around the world.  Opeth always has a chance to make AOTY (Album Of The Year) lists, but this one seemed to be the last one where both prog-snobs and death metal fans were in agreement.

An oasis found in between to unlikely places, Ghost Reveries will continue to stand the test of time.