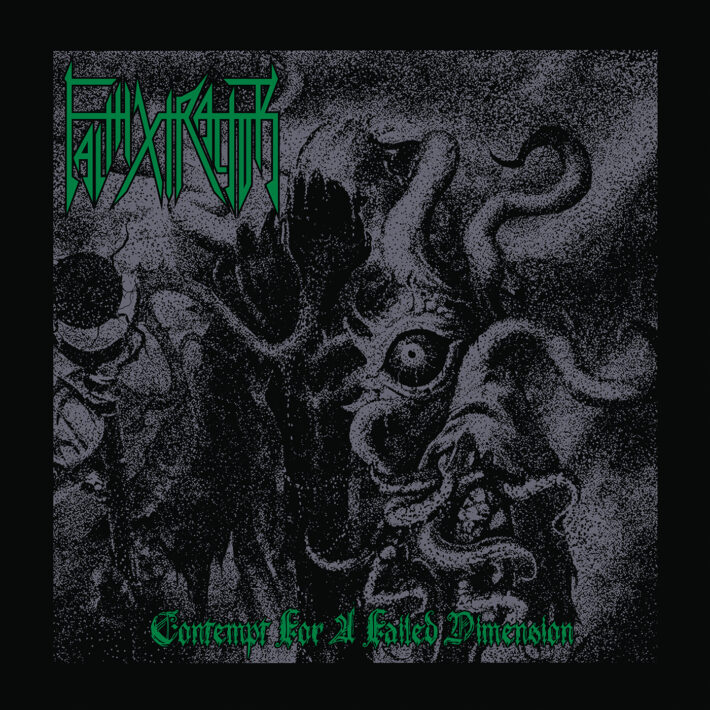 Faithxtractor are a death metal band from Cincinnati that formed in 2005. The upcoming Contempt For A Failed Dimension is their fourth full-length release, although at a run time of under twenty-five minutes, this album can be added to the pile of evidence that the distinction between an EP and an LP has become virtually meaningless. Faithxtractor know their craft at this point. However, they have some issues with using their tools in an effective, cohesive manner.

Contempt For A Failed Dimension gives the listener a large, messy-sounding approach to death metal. The level of intentional slop on display is impressive. The band’s intent is clearly to focus on the atmosphere and rigor power that death metal distortion can give, rather than on technical proficiency or melodic bursts. Guitar solos come before, after, and during verses, with no regard to anything other than increasing the wild nature of Faithxtractor’s sound.

The riffs end up sounding fine on aggregate. Some come out as righteously filthy (see the middle of “Life Abnegation”), but others were placeholders that ended up causing me to zone out more than anything else. Some sound ripped from a Tomb Mold record but without the necessary surroundings to make them work. In contrast, the guitar solos always heighten their surroundings and leave me with a smile.

Outside of the guitars, the drums do a good job of alternating between going ballistic and stopping on a dime, and the vocals work quite well for this style of music. The bass fills out every single crevice possible, resulting in a thick wall of sound that helps the record function. The band plays around with tempo quite a bit. In their performances, they manage to make their sudden tempo changes sound quite smooth and natural, which can always be aggravatingly difficult to do, whether you are playing live or fixing the sound later.

However, the smooth performances don’t change the fundamental issue with Contempt For A Failed Dimension that the tempo changes reveal: Too much of this record is stitched together without sufficient meaning. The tempo changes just happen, and sometimes they don’t actually do anything for the songs. When the drums and bass suddenly stop and the bottom falls out on the guitars, it feels like something that happens because it’s supposed to happen and not because it works for the song. On top of this, these same tricks are repeated often enough in Contempt For A Failed Dimension that they stop being powerful musical moments and start being stuff that just happens, which creates a void where real powerful musical moments needed to be.

I started writing a list of songs that had sudden or awkward endings, but gave up after realizing that I could just reference the track listing below instead. This isn’t the biggest thing in the world, but every track has an odd or weird aspect to its ending that leaves a confused final impression. The opening track, “Vomiting Proclamation,” is the worst offender, with a fade out so sudden and artificial that it makes the piece seem like an introduction rather than a proper song.

None of my issues with Faithxtractor were immediate. At first, I was just having a good time listening to some solid-sounding death metal with high-energy guitar moments. Over time, as I began wanting to listen to Contempt For A Failed Dimension less, these are the gradually-unfolding blemishes started to drive me away from the record. None of them change the power, fun, and energy that Faithxtractor can deliver on a first listen.

Faithxtractor, above all else, seem to have a great time on Contempt For A Failed Dimension. While I grumble about the band’s songwriting choices, they didn’t keep me from enjoying this record. I probably won’t be returning to this record despite its upside. That doesn’t mean it’s not worth checking out if you’re into the more hard-boiled side of death metal.