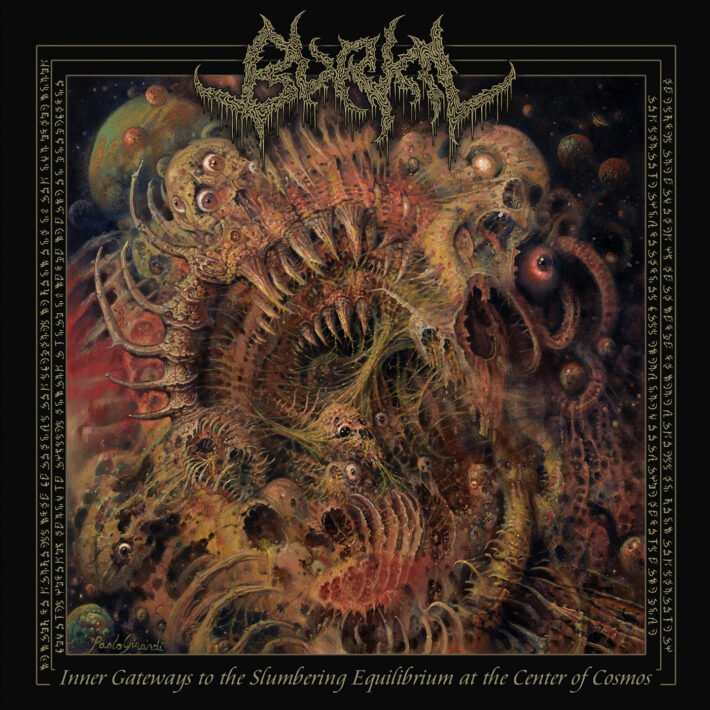 Inner Gateways To The Slumbering Equilibrium At The Center Of Cosmos is the debut full-length by loquacious Italian death/doom band Burial. I’ll refer to it as Inner Gateways from now on for the sake of my word count. Burial plays death-centered death/doom in the style of Xibalba, Coffins, and The Drowning. Although Burial can be quite heavy, their chance for success in a suddenly strong death/doom market is for them to leverage their dynamic range and their willingness to take songwriting risks. The death metal portions have a vague smell of cavernous death metal.

Burial don’t play a lazy death/doom. On Inner Gateways, they stretch the reasonably large confines of the genre as far as they can go. Each of the five immense tracks fully lean on the style’s tropes at times to create music that feels heavy in a way that only death/doom can. The vocals and production drag the listener below a layer of cold, dense soil and into sounds that simultaneously weigh on the listener like a boulder being pushed uphill for an eternity while also moving at a decent clip. The rambunctious passages of Inner Gateways land with a loud and full thump that gives the slow, creeping satisfaction you can’t find outside of this subgenre.

At the same time, Burial isn’t afraid to drop their sound down to a whisper. I didn’t count it out, but it feels as if the band spends the majority of the record in quiet silhouette. Diseased dangers lurk behind every corner, but aren’t always found. This record isn’t just extremes, Burial gives you everything in between as well. The sheer variety of Inner Gateways astounds me given the band’s ability to maintain an identity and never lose track of their desired sound. The atmosphere of Inner Gateways absolutely never slips. For a debut band, this is an impressive accomplishment.

However, as we look more closely at this record, the crypt-like atmosphere turns into the Richard Nixon Memorial Library. That soil that the singer drags you under? Topsoil for someone’s suburban lawn. The main issue with Inner Gateways lies with the songwriting: The notes simply don’t do enough. Most of those quiet, creepy passages work until you realize that they don’t want to go anywhere. Especially in doom metal and slower music in general, every single note needs to do something. In Bell Witch’s massive Mirror Reaper, every note contributes to the feeling of loss that sinks through the record. In Esoteric records, the band will often linger on a sound for long stretches of time to allow the music to build towards a massive eruption of noise and weight. Yes, those are both funeral doom examples, but the same applies to standard death/doom. Contribution doesn’t have to move in a building direction, either. Passages can serve as decompression or as contrast to other sections of a song or album. On Inner Gateways, I get the sense that the band knew what album they wanted to write, but they didn’t take the time needed to actually write it, and large amounts of the lengthy tracks fail to do anything as a result.

Long swathes of Inner Gateways simply have no reason to exist. This appears most readily in the soft sections. As the music lessens, so does my tolerance for Burial’s writing. But the problem isn’t confined to these unfortunately contemplative times. Many of the heavy, destination moments on Inner Gateways sound like Burial spent all their time fully fleshing out their tone, and then realized at the last moment that they also should probably write a riff. The record’s genre works against it, as the slow, grindy nature of the music lets the listener really sit and contemplate the gaps in Burial’s songwriting efforts.

The core of a great death/doom band is here. Burial nail the atmosphere, the infinite weight that shines in the best death/doom. Unfortunately, they didn’t finish the deal on their debut. I’d recommend this to people who have listened to the new Worm and Hooded Menace releases too much and want a break without leaving that style. For me, I’ll be sure to give their next album attention.