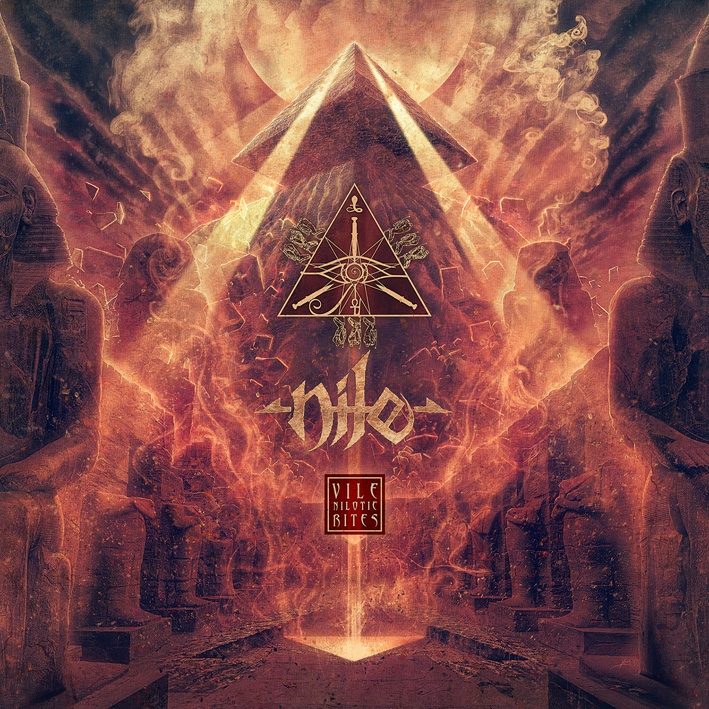 A common criticism of the technical death metal band Nile goes something along the lines of, “all of their albums sound the same, so their newer albums suck in comparison to their older stuff.” I am not the biggest fan of this sort of criticism of music. “More of the same” isn’t inherently bad, and sometimes revisiting and refining a sound can lead to more interesting music. I can’t dismiss that criticism completely though. Unless they make large improvements compared to previous albums, a band that makes albums that sound too similar to each other doesn’t give anyone except their biggest fans a reason to listen to their newer material. Maybe that matters to the band and maybe it doesn’t, but it certainly matters to the listener.

Enter Vile Nilotic Rites. According to the promo material, there have been some drastic shifts in the band since What Should Not Be Unearthed was released four years ago. Half the band is new, their production process has changed, their writing process has changed, and their lyrical approach has changed. What all this adds up to is an album that sounds like a sequel to their previous record, rather than just a re-recording of it. So that’s progress, I guess. Full marks to Nile for at least trying here.

I’m not trying to downplay all of what Nile has done here. The production is noticeably different from recent Nile albums, and sounds much clearer and less tiring to my ear. The guitars have a darker tone, and the base is louder than  usual. Listening to Nile albums can be tiring. The change in approach to production helps.

Another change from the typical Nile sound that helps me survive listening to Vile Nilotic Rites is the greater variation in drumming patterns. Do not fear, there is still a thick sheet of bass drum notes blanketing large portions of the album. But the kicks don’t seem as prevalent as they have been on past albums. Whether or not the base drum patterns are actually more varied than the ghost of Nile albums past or my ear is just more patient here, the appearance of variety here allows me to approach the album without being absolutely beaten into submission by a bass drum. George Kollias is still amazingly talented on drums, and the drumming patterns are still impressive. In fact, by having more versatility than can typically be found on a Nile album, the drumming is actually more impressive than usual. Double kicks are great and all, but they aren’t the only interesting technique a drummer can use.

All of the musicianship is impressive. This is still Nile; even at the band’s worst they can play their instruments well. Unfortunately sometimes it can feel like they are writing to showcase their talent rather than to write actual good songs. A spectre is haunting Vile Nilotic Rites– the spectre of “soulless technical death metal.” Some previous Nile albums grappled with this problem and did much worse, but it still surfaces at places on this album. Technicality for the sake of technicality can be fun, but is usually forgettable on a studio recording. Luckily, the only real damage to the sound is that some of the songs are more boring than they had the potential to be.

The listener won’t really be surprised by anything that’s going on here. Vile Nilotic Rites does not suddenly top Annihilation of the Wicked or Ithyphallic in the pantheon of Nile albums. If you liked What Should Not Be Unearthed, check this out. There are impressive moments throughout. If you hated their last album, nothing here will change your mind. I find this to be a mild improvement on Nile‘s recent efforts, but not one that changed my opinion about the band at all. When a band has a history like Nile’s, that alone is impressive.