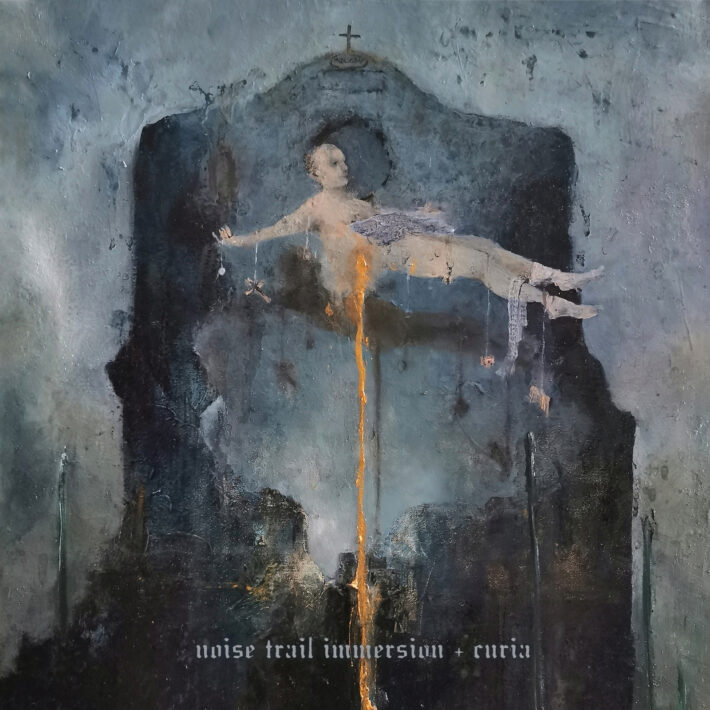 Noise Trail Immersion play…well, they play a lot of styles. The promotional material lists dissonant black metal, mathcore, post-metal, dark folk, contemporary liturgical music, and classical guitar as genre influences. All of this boils together to sound something like dissonant black metal’s answer to Opeth, albeit with the genres blended a little more thoroughly. The band fully steps into both the dark folk and dissonant black metal styles. With Curia, they attempt to “bring us real knowledge of obscurity, uneasiness and bleakness, by accepting them as part of man’s gist…without relentlessly forcing them to disappear from our essence.” This is sure to be a happy record.

These dark folk influences work well. I was a bit nervous going in that the band would follow the path of other loud bands and treat their more contemplative moments as throwaways or time-fillers until the actually interesting growling conglomerate of noises can return, but Noise Trail Immersion treat every moment with care. All of their various genre influences felt as if they were important on their own, and not just to serve as contrast. You can hear this approach as early as the first track. The three “Riesistere” tracks could easily have been an intro, interlude, and outro, and if that were the case I’d be complaining about the wasted time spent here. Instead they are all full tracks with all of the emotion they need to work outside the context of the record.

In all of those genre descriptors, one term is conspicuously absent: avant-garde. Despite the swirling and ever-changing influences, the structures and songwriting choices remain relatively straightforward on Curia. This pays off. Noise Trail Immersion take the listener on a journey that can fully engulf them for many listens and never grows stale. At the same time, Curia is accessible enough for most people who come across it to solidly latch on immediately. Listeners who are into more bizarre or extreme sounds may find themselves disappointed. And no one who stays clear of dissonant black metal will even listen to Noise Trail Immersion in the first place. But there is a sweet spot of listeners for whom this will be the record they didn’t know they needed.

Noise Trail Immersion does spin their wheels at times. I didn’t find Curia falling out of my favor, but I did groan at the thought of turning it on in the first place a few times. The band has a tendency to stay in a moment for too long. They have an agnostic approach towards dwelling too long in dark folk moments or doing so with more extreme sounds, but both marr Curia.

I found myself getting impatient with Curia. While this may be just as much my problem as the record’s, this was disproportionately an issue for me here compared to other, slower-moving records. Part of this can be ringed up as an expectation issue. When I listen to funeral doom, I expect to be there a while. When I listen to dark folk or ambient music, I expect a certain level of uniformity. When I listen to something with as large a variety in sounds as Curia contains, I question what’s missing. Noise Trail Immersion traverse wide ground. Even the least generous interpretation of what they’ve done here is impressive. However, I couldn’t help but want more. The band is clearly capable of writing unique and powerful music, and Curia doesn’t feel like their grandest statement.

That leaves us with a record that makes me scratch my head. Curia is an emotional and varied work that hooked me on first listen and never let go. However, those hooks stayed shallow and I haven’t felt much of a desire to return to Noise Trail Immersion at all.  I’d recommend this to anyone looking for music that walks down its own path, and to anyone looking for black metal experiments. It just feels like the band hasn’t flown as high as they can yet.