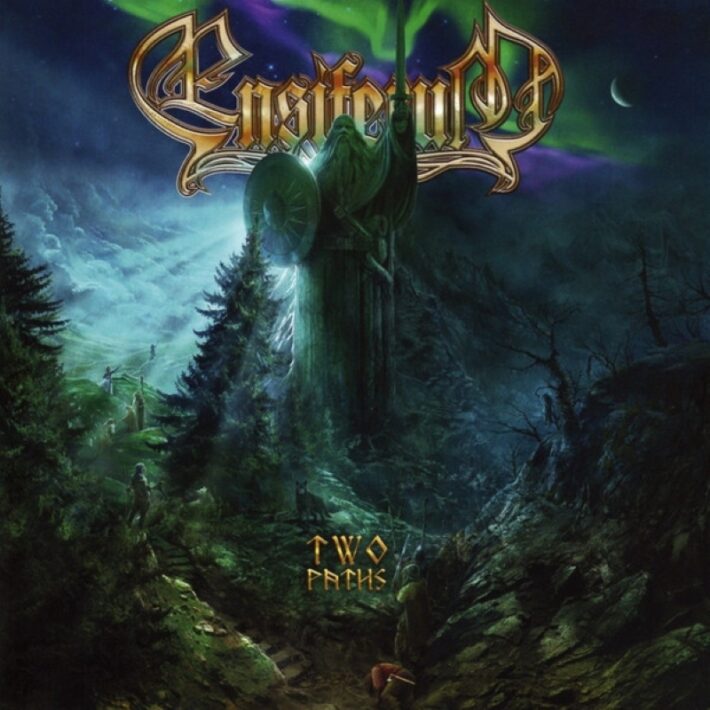 Firstly, you might be wondering who I am. Then you might wonder why I decided to review a four-year-old release in Ensiferum’s Two Paths. Well hello, my name is Jared. You may recognize me from my awful Twitter. I’m new here, and this happens to be the review I wrote to demonstrate my writing to the great people here at Metal Utopia. And now (un)fortunately for you, you get the opportunity to read it too. Full disclosure, I am a huge fan of Ensiferum. These Finnish giants are one of my favorite bands, and I unapologetically adore their early records. So, with full transparency, I’m attempting to set my biases aside and give a fair, critical review of a band I absolutely love.

Following an orchestral intro, Two Paths opens with the anthemic “For Those About to Fight for Metal”. A plucky guitar lead gives way to aggressive verses and gang choruses shouting about brotherhood. “For Those…” is a popular single, but it falls flat for me. In fact, I can safely say I don’t like this song; its hollow platitudes juxtaposed with triumphant orchestration come off as forced. The guitar leads and vocals fail to impress as well.

The second single “Way of the Warrior” is a definitive improvement, forging a driving energy that the prior track couldn’t muster. Founding member Markus Toivonen creates articulate guitar melodies that feel genuinely triumphant, although the lead tone lacks bite. This song is very reminiscent of prior release One Man Army, and would fit comfortably on that record.

The title track starts off strong and has a decent middle section, but the unappealing clean vocals at the verse quickly undermine it. During prolonged instrumentals, the questionable production becomes an issue again. The hearty bass is consuming throughout the record, while the lead tone is thin and tinny, often buried in the mix. This nagging issue stifles the impact of Two Paths considerably, as Ensiferum’s style often relies on epic, powerful lead guitar work.

Subsequent two tracks “King of Storms” and “Feast with Valkyries” feature an energy and heaviness that most of this record lacks. The orchestrations on the former compliment the guitar leads, although production continues to hamper its effect. The latter possesses a refreshing celebratory energy brought by singer and accordionist Netta Skog (ex-Turisas). Despite muffled vocals, this pair of songs serve as stronger points on the album.

Unfortunately, the success that Ensiferum previously found proves short-lived, as it is negated on the very next track, entitled “Don’t You Say”. Here, our folky Finns attempt to channel the folk-rock groove of my beloved Eluveitie, and fail catastrophically. They incorporate plenty of folk instrumentation in the melody, but the lifeless clean vocals destroy the energy. The chorus is also an unappealing earworm that feels cheap and uninspired, and aggravates me to no end.

In contrast, “I Will Never Kneel” creates and maintains an addictive groove with heaviness and folk instrumentation, allowing this song’s strength to endure despite weaker sections. Even the airy, orchestral part is tolerable thanks to the blending of female cleans and heavier riffs. This track isn’t extraordinary, but following the aptly-named “Don’t You Say”, it certainly seems it in comparison. Subsequent folky romp “God Is Dead” serves as another welcome surge of energy thanks to Skog’s accordion. Once again, this is nothing extraordinary, but it certainly isn’t boring.

Two Paths represents Ensiferum’s desperate need for self-discovery at this point in their career. They’re writing gang chants, orchestration, and “catchy” choruses in abundance that will sour old fans. The few riffs reminiscent of the olden days severely lacked in punch, and we’ve seen a notable shift away from Petri Lindroos’ signature growls. The band’s flings with clean vocals and bouncy folk melody fall short of much they’ve released prior and since. This record contributes little of notable quality to their stellar back catalog, and continues their worrying downward trajectory that began with Unsung Heroes. This could be attributed to lackluster and even contrived songwriting (like on “Don’t You Say” and “For Those…”), objectionable production, and a simple lack of focus. Whatever the cause, it’s impossible to ignore the path on which Ensiferum is heading. They can’t seem to decide if they want to harken back to the Jari Mäenpää days, or if they want to emulate their folk contemporaries. Some might consider my words overly harsh, but as a fan I firmly believe that Ensiferum is capable of much better than this. Fortunately for us, our fierce Finns’ subsequent record Thalassic managed to reverse this trend and impress me like I knew they could.