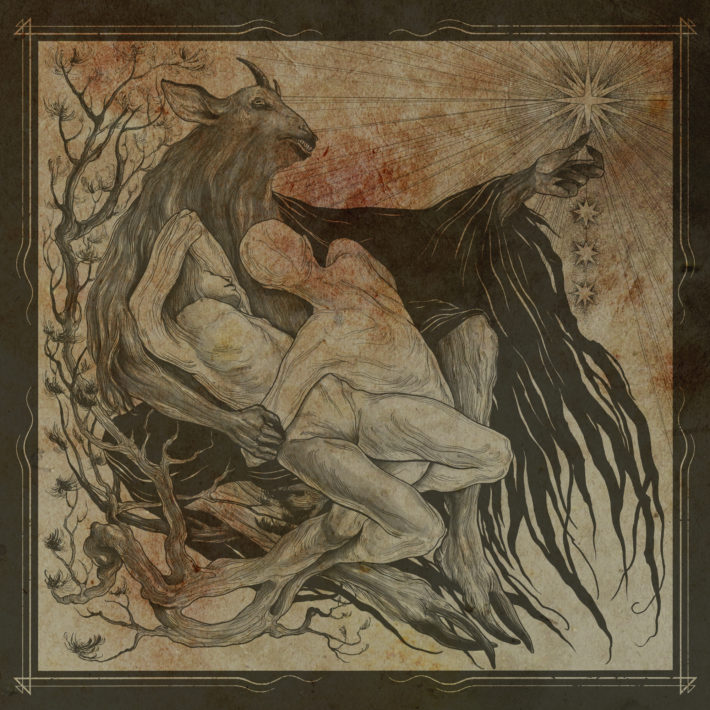 Sometimes finding a fresh black metal album that’s worth listening through, between the many albums that get released these days, can be a bit hard. Whenever you do find one, though, that’s all the more reason for celebration. This Wednesday, Fides Inversa, a black metal band from Rome, Italy, gives you a reason to celebrate, for they release their third full-length, called Historia Nocturna. The album’s cover kind of gives away the band’s main lyrical theme: Satanism, which is more than present in the music. The whole record feels like a sort of ritual, both in the compositional structure as well as in the music itself (like the vocals, for instance), which is very diverse and contains more melodic aspects than many other black metal albums. The general mix is just a little bit flat, which could be interpreted as an homage to the 90’s Norwegian black metal scene. Another thing that stands out is the length of each song: almost all are over seven minutes. Fortunately, they’re far from repetitive or boring, mostly because of its musical variety.

The record starts with an intro in which there’s choir-like chanting to be heard, on top of a kind of guitar static noise, which comes back every now and then, throughout the record, giving it a bit of a ‘live’ or ‘raw’ feeling. The guitar riff in the background progresses into the first full song, A Wanderer’s Call and Orison. One of the aspects that stands out the most is the fast and heavy black metal drums. Even between the already fast beats of the main rhythm, drummer Omega A.D. (also known from Blut Aus Nord) manages to play even faster fills, reinforcing both the music’s intensity as well as the variety. As far as the guitars go, these don’t lack in speed either: the main riff is like a supercharged version of the one played in the intro. The vocals, which are done by both drummer Omega A.D. as well as main vocalist Wraath (also known from Behexen), remind of Behemoth’s Nergal. About halfway through the song, the vibe changes: there’s a different guitar melody and the main drum rhythm is slower (although the fills keep the energy high). Partly because of this type of progression, which is present in, and between the other songs as well, the record stays interesting. Not only does every instrument work very well on its own, they also work together really well. This can clearly be heard on the next track, Transcendental Lawlessness. The guitars and drums work together, creating a hammering foundation for Wraath to shout “Transcend!” and giving the song an explosive intro.

After another powerful black metal song, it’s time for I Glance You with a Touch, I Touch You with a Gaze, the longest song on the record. The variety in this song is noteworthy, it starts off dissonant and fast, like the other songs, after a while there’s an interlude after which there’s actually a modulation, literally building ‘up’ the tension, and after about 5:30, it seems as if the song would stop. However, we’re in for another passage, with even more dramatic screaming, grunting and chanting than we’ve heard so far. The track ends with the vocalists reciting the song title over and over, giving the song the bombastic ending it deserves. These dramatic vocals come back even more ritualistically haunting in the last two songs of the record. On I Am the Iconoclasm, the protagonist seems to be transformed into the devil, for there’s dissonant guitar with haunting chants and mutterings, after which Wraath screams: “I am the devil, I came to do the devil’s work!” and with this, the music sets off for the finale, an intense, dissonant and haunting ending to a well-written album.

In conclusion, Historia Nocturna is a solid black metal record. It’s got a ton of energy, in all instruments, including the vocals. The variety on the record allows almost every song to be over seven minutes long: there’s changes in rhythm, in key, and in the vocals, which range from strong grunting, to chanting, to even wailing or moaning in ecstasy. If you’re looking for some refreshing black metal that’s still as alluring as the classics, you should definitely give Fides Inversa a spin.