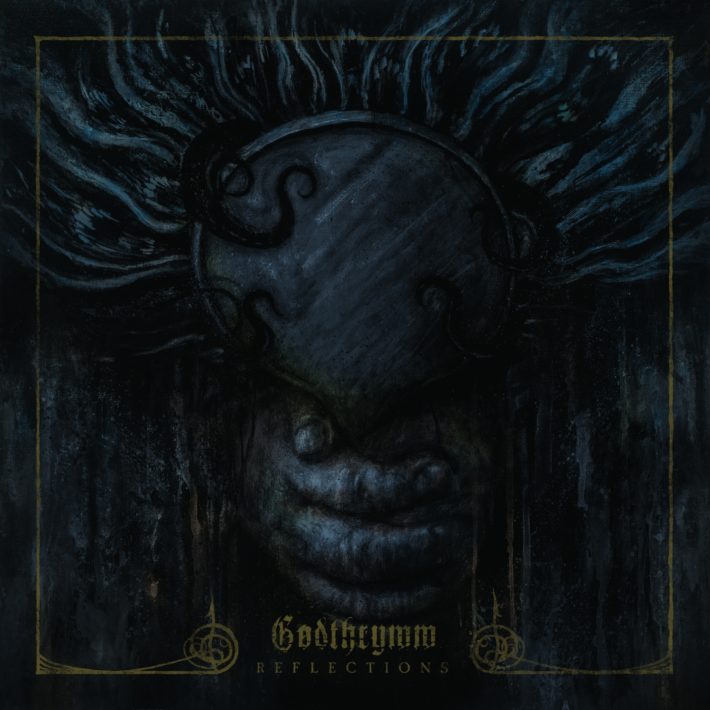 First impressions can be misleading, especially for albums with baggage attached to them. I try not to overly judge an album the first time I listen to it. Important aspects of the music can be missed or misinterpreted, and the listener’s surroundings may cause a response that won’t be there on subsequent listens in different places. My first listen of Godthrymm‘s Reflections was no different, and I didn’t think much of it at the time. Later in the day, however, I had a slight issue: a riff from the opening track had found its way into my head, and nothing helped get it out or lessen the repetition of this one riff in the slightest. I ended up looking forward to my second listen of Reflections more than any other album I’ve reviewed yet.

Reflections is the debut full-length album by the doom metal band Godthrymm, a new project by ex My Dying Bride members Shaun Taylor-Steels and Hamish Hamilton Glencross, as well as Bob “Sasquatch Bob” Crolla. I’ve never been particularly smitten by My Dying Bride, although I admittedly have not fully explored what they have to offer. If you haven’t either then don’t let that kill this project for you. Reflections is much more grandiose and heavy than anything I’ve heard from these guys before.

The riffs on Reflections are fantastic enough that even if the rest of the album was terrible, I would still recommend giving it a chance for them alone. Heavy, epic, and memorable, they ring through the entire effort with almost no weaknesses. As stated, the first impression was impressive. That only improved as time went on. There were zero tracks that felt like filler on Reflections, and the credit for that lies with the riffs.

Godthrymm has managed to capture a minimalist and clear sound on Reflection while still writing full, intricate music. “The Grand Reclamation” contains an excellent example of how they managed to have their cake and eat it too. There are sections of the song where the vocals would normally be solo, but they leave the bass playing a sustained note underneath. Because of this, my mind simultaneously interprets the passage as the vocal solo it is intended to be, and also as a more lush passage with accompaniment. Godthrymm accomplishes a similar feeling throughout by having the guitars and bass crash together on a long, sustained note with a frantic, longer than normal drum fill underneath. These types of passages aren’t unique to this band, especially in the realm of doom metal, but very few bands are able to pull off the combination of contradictory sounds quite as well as can be found here.

Not everything is perfect. The vocals and drums both sound slightly off at times. Usually when this happens, Godthrymm is able to pull it off: everything clashes off everything else at a perfectly wrong angle, and the result is a nice change of pace. However, there are a few points where the effect fails, and it is immersion shattering. The drums sound artificial and poorly-produced, and the vocals sound out of key, out of place, and soft. This is highly distracting whenever it happens, which is fortunately not that often.

Reflections is an excellent doom metal album, and it’s one that will remain in my rotation for a long time. It is catchy and excellently written. I have some fairly major grips, and they are unfortunately large enough to detract from the experience of listening to the album. However, outside of the occasional questionable style choices on the vocals and drums, listening to Reflections is an excellent experience. Time to check out some old My Dying Bride albums to see if I’ve warmed to them. Shaun and Hamish have earned at least that much with this excellent album.