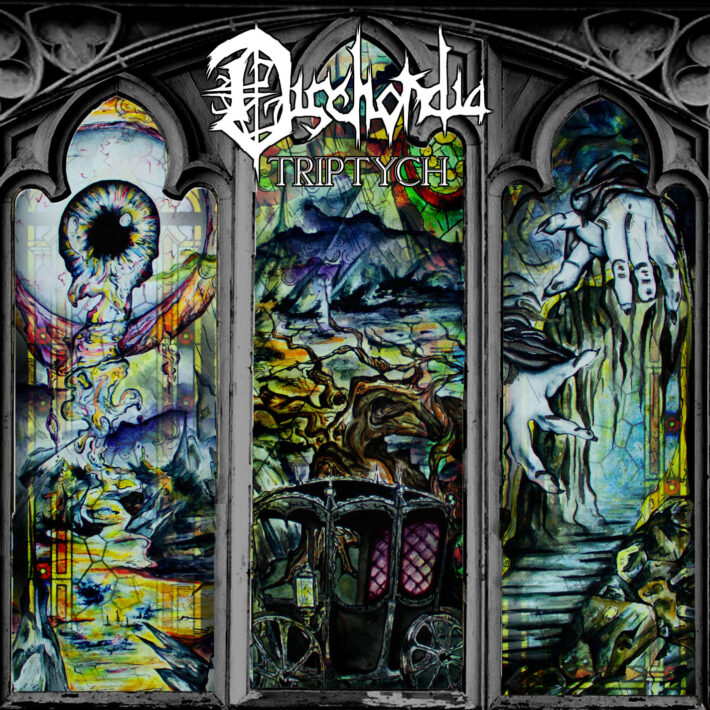 Triptych is the third full-length release from American technical death metal group Dischordia. The band solidly resides in the weird section of the genre, with spice and clever dissonance taking priority of noodling. All three band members are given the spotlight at times, but this group lives and dies based on their structures and atmosphere rather than any attempt to outplay other bands. Melodic lines are nonetheless present in Triptych, and some come in forms that death metal aficionados won’t necessarily expect.

Dischordia’s songwriting is uniformly excellent. The heavy sections are dense, breathing monsters that lean on death metal’s tendency towards chaos and run around with their arms flapping. However, they still sound precise and intentional. Although this music can be chaotic, Dischordia remains in control throughout. Overall I had a good enough time with these to keep coming back for the death metal riffs alone. And Triptych has so much more to offer.

From my first listen, the smooth transitions impressed me more than anything else on Triptych. The slide from death metal brutality to a spooky flute passage in “Bodies Of Ash” immediately let me know that this was something special. Dischordia has the ability to transition naturally and seamlessly from hectic death metal pummeling to sparse and mysterious flute solos. Nevermind that the band plays both sections flawlessly and the pure enjoyment that comes from a flute solo in the middle of a death metal track. Dischordia does the little things right, and it results in a much more satisfying record.

They do the big things right as well. That flute section is not the only spooky quiet interlude on Triptych, the band peppers them throughout. Every single one holds my interest, not just as a change of pace, but as music that stands on its own. Regardless of the style, Dischordia knocks it out of the park. The production deserves credit as well. Just like every other album made in the past ten years, Triptych is mixed and mastered by Colin Marston, who gives the band clarity without sacrificing power. The bass especially benefits from the production, and the occasional frantic bass runs add yet another dimension to the music, proving that the instrument is worth the focus it gets.

In fact, every performance Dischordia gives sounds great. The vocals sound like a deeper version of Meshuggah’s, floating in and out of space in a pseudo-monotone that trips up the rhythm of the songs. The drums routinely go ballistic. Even though I know this was carefully written, I can’t help but picture Animal from the Muppets having a great time on the kit in the more effective moments. The guitar does its job well, although it stands out less due to the bursting size of excellent guitar playing in death metal recently.

For downsides, it occasionally feels like Dischordia listened to their ancestors too many times and decided to just do that. Not in itself a problem, originality is overrated and all, but some passages were so similar to bands like Sunless or Ad Nauseam that it took me out of the music. Additionally, the record lasts a little too long and starts to drag around the area of “The Carriage” and “Panopticon.”

Triptych is well written, well performed, and fun. You can have a great time diving into the weeds and of the music, or you can let the loud times roll. I wish they had done a better job trimming down their sound, and the band’s identity may not be the most distinct, but this record will still impress those who complain that death metal is stale. I recommend this to anyone who is a fan of the odder side of technical death metal.