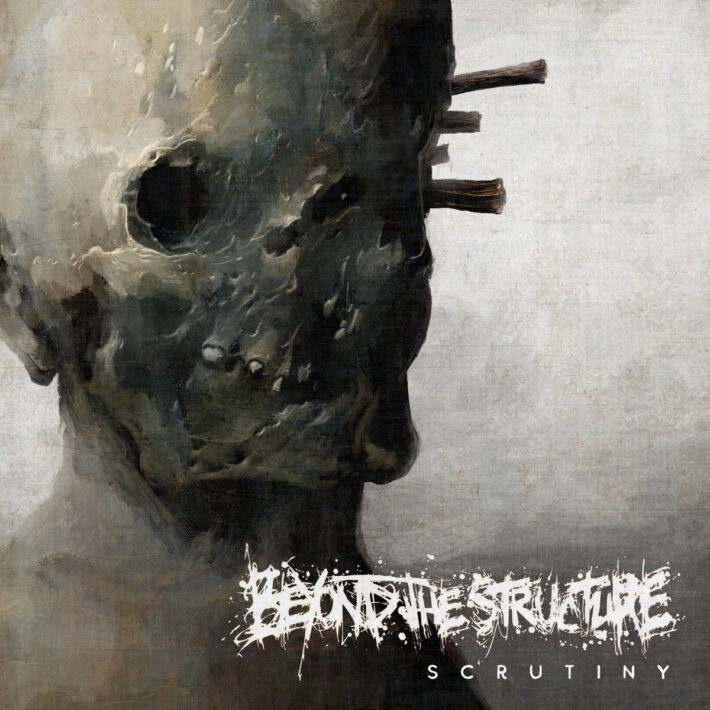 The face is an emotionless mask. Perhaps it was once human, but now it is a shattered husk. Misshapen black cavities leer menacingly above a misaligned jaw. Did this tortured soul encounter demons from Lovecraft’s nightmares? Are the wooden stakes driven into its sloughing face further evidence of misanthropy? Or perhaps the sinister mood captured by the cover art for Beyond the Structure’s album Scrutiny is more philosophical. Are the crushing and winding riffs that permeate the death metal record like worms greedily infesting a funeral shroud the misguided actions of humanity?

Estonian death metal outfit Beyond the Structure aren’t new to the scene. After forming in 2012, the band has an album and an EP under their belts. Despite numerous lineup changes, Beyond the Structure has kept their core sound consistent over the years. Scrutiny, their sophomore album, is a raging slab of death metal sprinkled with technical moments. There’s nothing groundbreaking on Scrutiny, but if you’re looking for a brutal album this should scratch that itch. Fans of Hate Eternal, Suffocation, and Gorguts should all find material to enjoy.

Scrutiny lifts off the ground with the track “Endless Cycles.” The guitar shredding complements the brutal growls from vocalist Edgar Balabanov. The next song “Progressors” begins with a memorable riff. The rhythmic playing from bassist Yaroslav Luzin and the dissonant guitar riffs from Artjom Balakshin set this song apart. However, just as it gets going, the record starts to derail. “Worms of Consumption” is standard tech death material. There’s nothing proficiently wrong with this track, but nothing really stands out either. It’s the major problem with Scrutiny – there’s plenty of technically competent material, but a lot of it lacks ingenuity.

“Portal to Eternity” is an example of what Beyond the Structure can accomplish if they are pushed to their creative limits. The swirling, mind-warping guitar evokes images of otherworldly despair. A jazzy interlude descends from the metal gods and is perfectly enshrined within the middle of the track. The listener is pulled into another dimension with the band as they slip deeper into the “Portal to Eternity.” Unfortunately, this moment doesn’t last forever. Maybe it’s the mixing on the next track, but the instruments on “Fictional Reality” seem to blend into a disappointing forgetfulness. The efforts by drummer Simo Atso almost save the song from the heap of mediocrity, but the vocals are lost in an aimless slog. “Profanation of the Non-Existent,” while short, showcases Beyond the Structure flexing their progressive side. The melody toward the end of the song is reminiscent of something Rivers of Nihil might write.

The renowned poet Robert Frost once penned the lines “nothing gold can stay.” Moments of superb musicianship on Scrutiny are often overshadowed by lackluster performances. “Numerous Existences” is a poster child for the archetypal tech death song. Regrettably, the only feeling it inspires is one of boredom. Then it’s on to the album closer, “Mass Psychosis.” The dissonant riffing in the first part of the song recalls the band Krypts. The track takes on a life of its own as the rhythmic guitar strumming perfectly transitions into a tumultuous outro. As the final notes fade into silence, the listener is left yearning for more.

Is Scrutiny a mediocre album? While not a masterpiece by any stretch of the imagination, that’s selling Beyond the Structure short. Scrutiny is a solid death metal album that suffers from inconsistency. There are moments that really shine on the album and then there are parts that are forgettable. If Beyond the Structure can rise above their current station, the potential for greatness is simmering just beneath the surface.