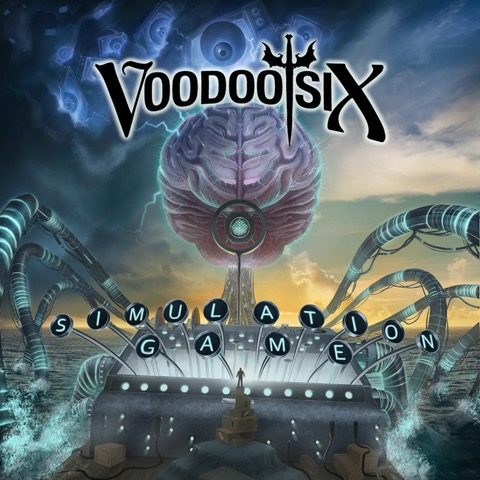 Some people will try to explore new ground, come up with new ideas, and find new sonic fields to play in. Voodoo Six are not those people. Simulation Game, their sixth full release, is throwback rock that feels old and familiar the first time the sounds fly past you. The band plays with confidence and energy. Is it enough energy to overcome the decades of cultural inertia that comes with their chosen sound?

The drumming on Simulation Game is nothing short of fantastic. There is nothing fancy, no aggressive fills, no Mastodon level insanity. Instead, each hit seems perfectly calibrated to be in service of the music. Moods gain needed support from the snare and the cymbals, and every other instrument leans on the emphasis this percussion provides. Could any professional drummer play these tracks just as well? Probably. But the more important question is if they would have. Restraint at the proper time is just as important as speed and emoting, and Voodoo Six shows all of the correct restraint in the best possible places.

Speaking of restraint, the vocals are a mixed bag. The vocalist Nik Taylor-Stoakes sings with gusto, hits all of his notes, and sounds in control of his voice at all times. He also sounds like he had his soul fused with a drunken amateur blues singer in his 80s. Excessive vibrato and growling is applied absolutely everywhere, and on top of that a lot of the lyrics are noticeably slurred. The result is amusing and distracting. If you can get past that, there is nothing wrong with the vocal performance, but getting past the drunken side of the apparent soul-bonding is not an insignificant ask.

The guitars and bass guitar aren’t bad, but they don’t improve Simulation Game. There are guitar solos splattered all over the album, but they never rise above or below being forgettable. One solo just finished as I started typing this sentence, and already I can remember absolutely nothing about it. At least the strings aren’t actively detrimental, and are instead just serving as wasted potential. Overall, the string instruments perform their purpose as being a solid backing for the vocals well, and don’t really move beyond that territory. Nothing you haven’t heard thousands of times before.

Let’s move onto the songwriting and hope it can re-spark any interest. Everything follows the classic rock formula, but Voodoo Six makes the formula a winning one. The choruses are memorable and fun, and their occasional excessive nature mixes well with the vocal tendencies found here. The guitar riffs are, like everything surrounding the strings, fine, if unmemorable. Not all is well, though. Problems arise as you scroll down the track list.

Even though Voodoo Six do all they can within their chosen musical formula, it still ends up poisoning their chance at releasing a masterpiece. The first track “The Traveller” sounds great, so does the follow up “Gone Forever.” “Liar and a Thief” mildly bumps up the stakes by simplifying the chorus to make it even more memorable. After that, everything morphs into one big grey nothing. You end up hearing the same song over and over, and although none of the songs are bad individually, together they start to coagulate into a blob of boredom. There is an attempt at a ballad late in the album, and it’s fine just like everything else, but that doesn’t change how tired the album sounds.

I’m not convinced that the weariness drowning this album to death is Voodoo Six’s fault. Some people say that rock is a dead and creatively bankrupt genre. I don’t agree with that, but after listening to Simulation Game it’s hard not to at least consider it. If this album had come out 45 years ago it would have been great. 25 years ago it would have been a good throwback. Now? It just feels like more of the same,  at best. The band’s formulaic tendencies don’t help, but even if they had sidestepped that I don’t think that feeling would have gone away. Every sound Voodoo Six  creates ends up being something I’d heard enough to be tired of the first time I listened to this albumbecause the sounds of classic rock have been pumped into our cultural background to the point of saturation. I’m listening to a genre try and fail to deny its own mortality. Everything dies, and rock is no exception.

If weird vocals don’t bother you, check out Simulation Game. It’s a fun album apart from the minor existential dread that creeps in. Nothing new here, but Voodoo Six have written and executed a fine, consistent piece of rock with a high floor and low ceiling.