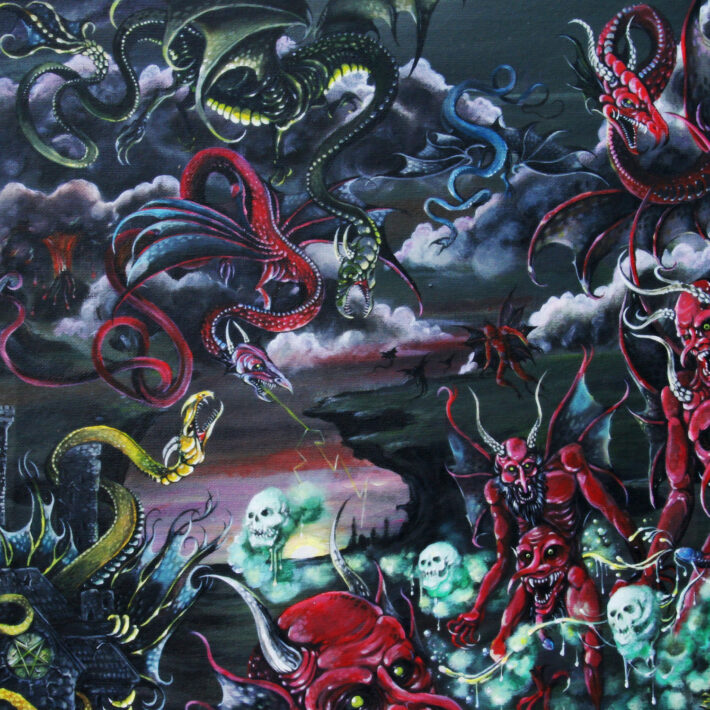 Daeva is a fresh blackened thrash group made by three-fifths of Crypt Sermon. As may be expected, the result is excessive in every way that the band members could think up. Their debut full-length record Through Sheer Will And Black Magic follows a 2017 release as the band’s only output so far, but Daeva sound fully-formed and ready to go.

Maybe it’s just the Crypt Sermon influence, but Through Sheer Will And Black Magic sounds kind of fun and goofy to me. This isn’t a band with something to prove, but a group that already basks in the glory of absurdity. The excessive nature of this record starts almost immediately after the obligatory and useless two minute intro. The first proper track “The Architect And The Monument” contains everything you want: great riffs, sinister vocal contortions, and drums that make me think the drummer’s arms will fall off. While the record eventually contains some more contained sounds, the opening track tells you exactly what Daeva’s going for.

The vocals sound intentionally old-school. Reverb drips from every sinister proclamation, and the over-the-top inflections add to the fun of the record. While the vocals don’t blend in with the rest of the band’s sound very well, I can forgive this due to their infectious nature. A similar outcome exists for the drums: While the drummer seems more concerned with hitting every drum as often as possible than with playing with the music or accenting certain moments, the dude is having so much fun that all I can do is love the result.

This is blackened thrash, though, so the main attraction is the strings. Riffs on Through Sheer Will And Black Magic abound. Fast, frenetic, dazzling riffs. The guitar work is just as excessive as the drumming and vocals, and the bass pulsates faster than a man having a heart attack.  All the frantic enthusiasm could have failed, except for the simple fact that every member of Daeva gives a great performance.

These great performances cover up some interesting songwriting choices. The transitions in Through Sheer Will And Black Magic are abrupt, whether it’s the tempo change in the middle of “The Architect And The Monument” or the shift to ethereal alien noises three minutes into “Passion Under The Hammer.” Sometimes this works, but more often than that it’s endearingly frail. These moments sound like the band was so excited to get to the next riff or passage that they didn’t bother to spend any time figuring out how to connect them. While this duct tape and pyrotechnics approach to songwriting works for me in the context of this record, it may irritate other listeners.

I reviewed another blackened thrash metal back in August by a band called Blasted Heath. That band and Daeva have some similarities beyond the genre, so much so that my first feeling upon hearing Through Sheer Will And Black Magic was that of deja vu. However, while I thought that Blasted Heath’s debut didn’t quite hit the mark for blackened thrash, Daeva succeeds. The main difference between these two records is in the songwriting: while Blasted Heath had some safe riffs, Daeva blast through with fast and full moments that are played at a more aggressive level. There is simply more of everything on this record. Because of this, Daeva’s record manages to overpower some of the same issues that sank Blasted Heath.

Through Sheer Will And Black Magic is everything that blackened thrash should be: a ridiculous amount of notes played in an over-the-top fashion with little to no regard for dynamic control. Daeva don’t do everything right, but the infectious levels of pure fun and adrenaline on their debut record make up for any mistakes. I hope we hear from this group again in less than five years. I recommend this to anyone who doesn’t mind their music a little sloppy if it’s for a good cause, and for anyone looking for music that doesn’t take itself too seriously.