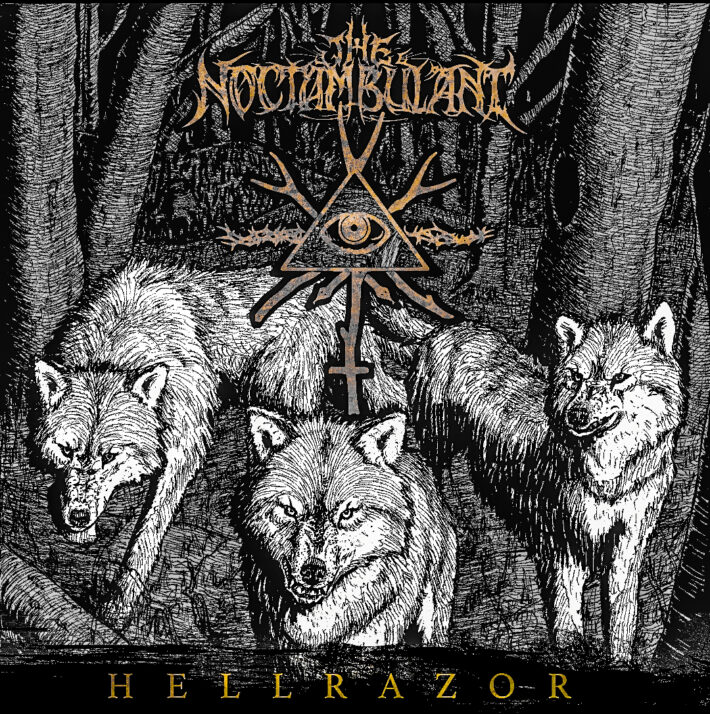 I’ve always maintained that the key to get me to like black (and death) metal is to make them melodic. If there’s a riff and there are melodies, then I’m all set – and there are good chances I’m gonna like your work.

By this simple standard, Hellrazor is already a good EP. But I’m gonna go ahead and say it, it’s more than good, it’s great, as it’s refreshing and original, and so you end up remembering it – which to me is one of the biggest achievements an album can reach, let alone an EP.

Let’s start from the beginning though. The Noctambulant aren’t newcomers, as they’ve been around since 2013 and they have released their fair share of EPs and two full-lengths.
There’s something, however, that makes Hellrazor distinctly different from their older releases, and that is, a sort of detachment from the classic, Scandinavian-like sound you’d kind of expect from most of the stuff exhibiting the black metal tag; granted, they always have been on the melodic side of black metal, but you get the idea: music evoking cold mountain tops and fog-permeated valleys.

Well, with Hellrazor the band has made one of the best decisions a band can usually do, aka they’ve looked around them, looking at their roots and what has made them who they are today… and they have actively embraced it. This EP reeks of sultry swamps and stifling bayous, it arises from the Southern Gothic tradition and it reveals the south Florida origins of The Noctambulant.
This only benefits them, because it put a new spin on their music, and this diversity is perceivable – and very much appreciated. Black metal is a genre that, stylistically speaking, can be strictly defined so it’s more important than ever to have a personal take while approaching it, and that’s exactly what these guys did.

Hellrazor starts with an intro made up of eerie whispering vocals and sing-songs guitars, intercut with your standard tremolo picking. The title-track soon follows, and with it the distinctive sneering growls; in its own way, this song is quite groovy as well, to the point that it becomes difficult not to headbang along. Blackened Swords Of Satan pays homage to all the things the band loved while growing up, such as loud rock’n’roll and epic, fantasy stuff; GHBM, another viciously catching song, is next starting right off the bat with death-like vocals and pounding drums, and it might just be the most “classical” song here. Troll Crusher ends it all, without lowering the bar one bit.

Short and stylistically cohesive, this EP mesmerizes the listener and it almost feels like it ends too soon, like a brief shoot of adrenaline. I’m not keen on considering this a downside though, because in an age where the space on a vinyl’s side isn’t a limitation anymore, many bands tend to exceed, while The Noctambulant clearly know when to stop.
The songs are good and get stuck in your head, and since they’re only four (+ one) you remember them all; also, just like every good EP should, Hellrazor has got me eagerly awaiting for these guys’ new album, and even if it might take a while, I’m prepared to wait for them.

It’s not every day that you find melodic black metal so well-written and compelling, and even then, it’s not every day that a band manages to play black metal in an original way. The fact that this EP is all-killer-no-filler is the cherry on top. They might double-down on the Southern Gothic side on their next work, to make it even more interesting, but as of now I really can’t think of anything bad to say. Even the mixing is crisp and clear, well-balanced and it gives to every instrument its rightful space. You couldn’t ask for more.