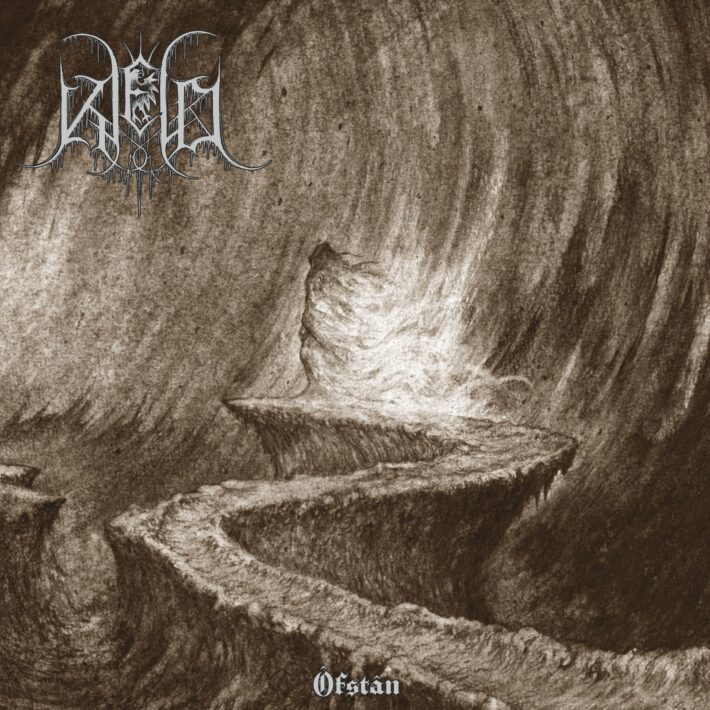 Kjeld doesn’t reinvent black metal on Ôfstân, their second full length release. In fact, large swathes of the record sound suspiciously like lost Enslaved demos. But originality is overrated, and Kjeld plays their sound with competence and confidence. Rather than take the easy-black-metal-way out of putting down some blast beats, including some riffs that are so lo-fi that you can’t hear the notes, and putting indescribable howling on top and calling it a day, this band made a very specific record, and the effort paid off.

The guitar riffs start Ôfstân on the right foot, and they hold up the record throughout its various ups and downs. The opening track, “Betsjoend,” contains a variety of riffs at a variety of tempos, and all please the ear. Although I prefer the faster sections of the track, I have to admit that the slower parts work out and that the song wouldn’t be the same without them. The song shifts enough to maintain interest over seven minutes, but remains structured enough that the listener doesn’t get lost or mistakenly think that they’ve entered the dreaded realm of avant-garde music. All is well, and all is safe.

All remains well throughout the record, but unfortunately the safety doesn’t go away either. Ôfstân is a very comfortable record, with the sounds of thousands of ancestral black metal albums echoing around like an aftertaste while the music plays. While this doesn’t diminish Kjeld’s accomplishment in making this record, it does raise existential questions regarding the release. While I was writing this review, I had to go back and check what I wrote for the last album I reviewed, Descent Towards Death by Los Males Del Mundo to make sure I wasn’t saying the exact same thing. That album doesn’t sound all that similar to this one, there were different production choices and influences within the genre, but they are both solid yet not transcending black metal albums released close to each other. Time is fleeting. If you don’t know a member of the band, why choose this record over last week’s fine black metal effort or vice-versa?

Outside of the riffs, Kjeld scores another point in their favor for the variety of their sound. I mentioned a slower section in the first track that breaks up the sound. Kjeld continues to employ techniques like this through the record. Nothing fancy, and nothing outside of the typical black metal toolbox. Just enough to keep the album interesting throughout. Even if there’s a riff or passage that you don’t think is all that interesting, don’t worry. Kjeld will switch things up in a moment. Even with that, the band ends up returning to their ideas enough that if you do enjoy said riff or passage, don’t worry. The band will return later in the track in a satisfying manner.

This record feels like it keeps going on forever. Compared to the beasts of the genre it doesn’t last too long, at just shy of an hour. However, I felt that this was complete after six tracks. The album continued for another three songs afterwards. These three songs were perfectly fine, I particularly enjoyed the closer and how the opening repeated-note riff gives way to a descending melody reminiscent of Phantom of the Opera. But it’s just too much. By the time I get to the end I’ve forgotten my enjoyment of the songs and am just thankful that the experience is over. That’s not the memory that this album deserves.

I’ve been somewhat critical here, but Kjeld have made a good album.  Ultimately, though, Ôfstân is the definition of “too much of a good thing.” First, Kjeld would have done well to have shortened the release, even though no individual track is poor. And second, the album is only a good thing as opposed to a great thing. Still, if you’re looking for a good black metal album with strong riffs, melodies, and varieties, give Kjeld a chance. Especially if you feel like gorging yourself.