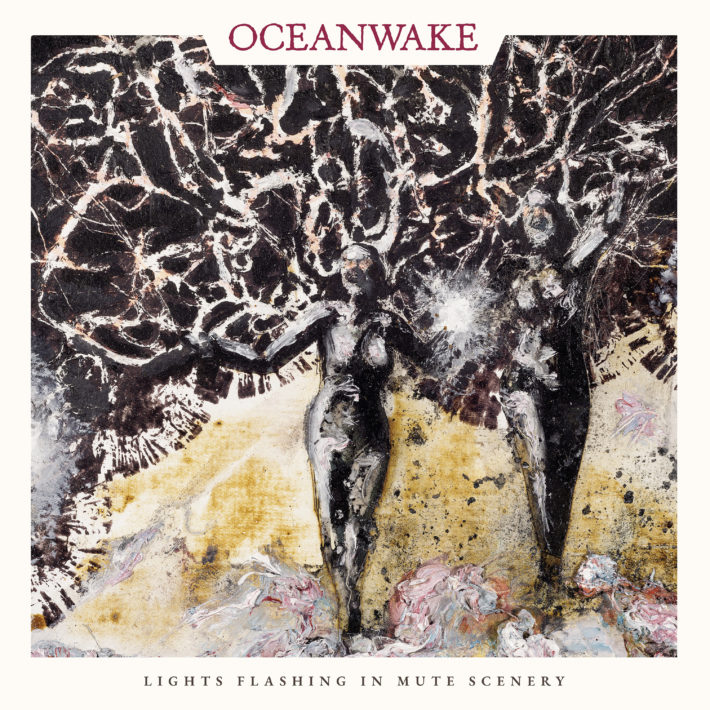 Admittedly, when I review an album from a band I’ve never heard of, most of the time I don’t listen to their previous material.  On one hand, there is simply not enough time for me to give previous albums proper attention they deserve, but on the other hand, an album’s quality shouldn’t be determined based on a prior catalogue.  Such is the case with Oceanwake.

Oceanwake is a doom band based out of Finland.  Lights Flashing in Mute Scenery is their fourth album to date.  The title in and of itself intrigued me, as well as what their press kit described as “if you are looking for fast access and smooth entertainment, you are in the wrong place. Oceanwake challenge listeners.”  Does this album live up to these standards?

One of the most prevalent aspects to this record is trying to fuse an older, classic doom sound with modern death-doom.  Tracks such as “Radiant Nightbreak,” “The Occult,” and “Titanomachia” are examples of this.  However, the band also flexes their prog muscles throughout.  “Titanomachia” is a Sabbath riff in 7/4 and “Travelogue” could have appeared on any Opeth record.

Oceanwake really excels at the more atmospheric side in their sound.  Moments like the intro to “Currents” or the middle of “Posthuma” or the entirety of my favorite track “Travelogue” are executed masterfully.  The clean vocals—while not unique—are wonderfully done.  These atmospheric parts spread throughout the album are delightfully hypnotic, and I wish the entire album was just this way.  They still convey the doomy tendencies of the band, but also allow them to spread their prog-rock wings in a comfortable way.

The weak moments on this album are its death-doom parts.  The harsh vocals lack the emotion and power that the cleans do, becoming more distracting to the atmosphere the band is trying to create.  The parts where they try to make it heavier and really go full death-doom has no impact; it feels forced and stale.  The reason why other death-doom bands are successful is in how they use these elements.  Take Swallow The Sun’s latest record; the heavy parts and harsh vocals are all used in such a way that it adds to the somber atmosphere that they’ve established.  I don’t feel that way with this album.  Some parts are OK, but I find myself wishing for more songs like “Travelogue.”

As I’ve said before, the album really shines with the more mellow parts.  The gloomy feeling they are trying to create is really successful in these parts.  Over the seven tracks, there are several of these, so the album isn’t all that difficult to get through.  Does “Oceanwake challenge listeners?”  Eh, perhaps not in the way they were thinking.  If they had picked one direction to go—say the prog-doom side or things—and sprinkled in elements of other influences, then this might have been a better record.  If they did that with this album, then it was too much of either side.  What I do appreciate about this album is the respect to length.  They kept it under an hour and had only one song that was ten minutes.  Because of that, this album wasn’t as uncomfortable as it could have been.

At the end of the day, there is room for improvement.  Not as bad as it could’ve been, but not great either.