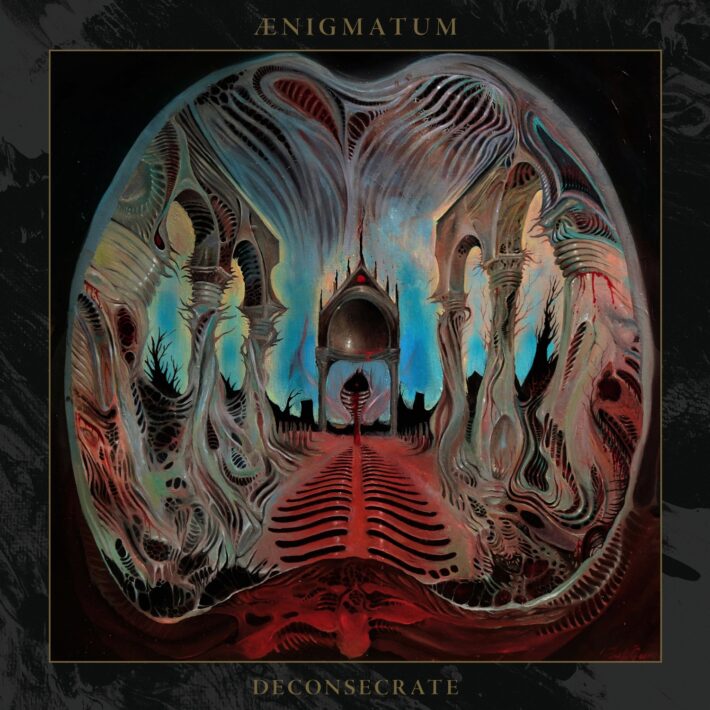 Aenigmatum (which should be spelled with a ligature) are the newest Portland, Oregon based death metal band. Their sophomore release, Deconsecrate, is being released via 20 Buck Spin. Not the most unique origin story. Although Deconsecrate isn’t technical death metal, this group prefers to dazzle with stellar songwriting, memorable riffs, and high-energy playing rather than by crushing the listener under an oppressive atmosphere. It works out pretty well for them.

Deconsecrate starts out with a cascading drum fill. Fits, which fits considering the non-stop action of the percussion. Deconsecrate has a vibrant, fluid feeling to it, which wouldn’t be possible with a stodgier drum style. Fills fly out of every possible gap, but they never sound more flagrant than appropriate.

Aenigmatum understand that the notes you don’t play give just as much shape to the music as the notes you do play. Their articulation sounds tight throughout Deconsecrate, which gives the album an extra dimension. Of course, Aenigmatum don’t bite off the end of every note. This may seem like a dumb thing to make a point of, but the level of detail that went into writing these songs shows a level of care that can be fatal if absent. Rather than hit the listener with layers and layers of guitars and blast beats at all times, this band saves it for the moments that matter. Each silence following a tight articulation, a pause in the melody line, or sudden stop of the drums adds to the effect of the following note. This careful writing style results in a much stronger album than could have been made, and reminds me of Chuck Schuldiner’s later stylings attached to a heavier style, or of a more sedated Faceless Burial.

No amount of articulation would matter if the bones of the album weren’t strong enough. Fortunately, they are. The riffs stand out along with the drums as high points of Deconsecrate. Aenigmatum spent just as much care crafting the riffs as they did the details.

For all of its well-earned strengths, Deconsecrate does fall short in a few areas. First, Aenigmatum could have trimmed some fat from this release. The interlude track “Floods Within A Splintered Cortex” offers a nice break from the punishing waves of death metal, but the production doesn’t sound compressed enough to really need this breather. Additionally, the song is about twice as long as it needs to be for this purpose. “Despot Of Amorphic Dominions” also doesn’t quite earn its run time. No individual section of the song falls flat on its face, but the whole doesn’t equal the sum of its parts. This is true of the whole album as well. Although I enjoyed each individual song outside of the interlude, I wanted the record to end a track before it actually did. No individual song felt too strong to cut, either.

The occasional guitar solo also pops up on Deconsecrate. They don’t sound bad, but they’re not great either. Whenever a solo started, I felt myself politely waiting for the solo to end so that the more interesting sections of the song would resume. You’ll also note I haven’t mentioned the vocals so far. Like the solos, they’re fine. Nothing bad, but nothing that’s any better than the last few death metal albums I’ve reviewed.

I enjoyed Deconsecrate. Although this may get lost in the long line of great death metal releases this year, Aenigmatum prove themselves worthy of your attention. If the phrase “Death metal album from 20 Buck Spin” sends a Brad-and-Janet-like shiver of anticipation down your spine, quit wasting time and check the album out already. If you’re less enthusiastic about Very Good Death Metal Release Number 487, maybe there’s not a lot here for you. As for me, I’ll be returning to Aenigmatum often enough.