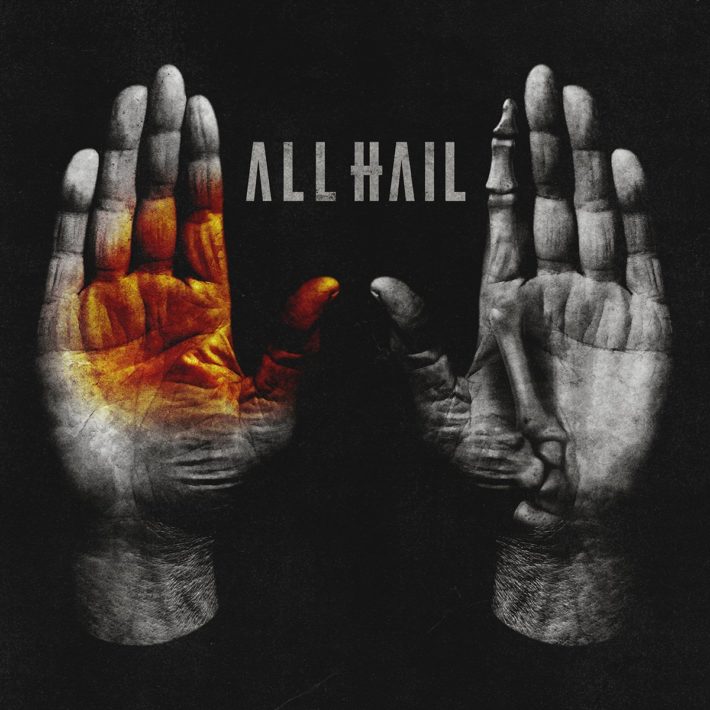 There are some bands that evoke the feelings of a familiar friend. You just feel right at home with the sound of their music. It’s comfort food, if you will. Norma Jean falls into this category for me. I’ve been a fan since 2008, with the band’s release of The Anti Mother.  I had the pleasure of reviewing Polar Similar a few years ago, an album that defied the downward trend of metalcore. So where does All Hail fall under the spectrum of a band that has released eight full-length albums?  Most fans will be pleased to find that All Hail is the hardest hitting album that the band has released in a decade. There are a lot of similarities to Redeemer in the song structures and level of pure sonic destruction that Norma Jean delivers on All Hail.

Droning guitars accompany an ominous drumming to the intro of All Hail. “Orphan Twin” is a short but effective track that features Cory singing, “It’s not like you to pretend!” This segues into “[Mind Over Matter],” a blistering track with groovy guitar riffs and traditional Norma Jean vocals that effortlessly meander between gravelly singing and gurgling screams. “Safety Last” launches with some distorted vocals. There’s an Oh, Sleeper vibe to parts of this song with the churning guitars and chaotic yet controlled energy.

Norma Jean has a penchant for including recorded samples on their albums. On the previous album, we were treated to ambient noises and a carnivalesque theme. All Hail features two short tracks with samples, “Volunteer Tooth Filing” and “Extra Dimensional Palate Cleanser.” Both tracks are under a minute and I’m not sure what the band is trying to accomplish here. If it’s a break from the raw noise pummeling our ear drums, there are probably better ways to accomplish that. It really does feel like going to the dentist, which is always an unpleasant experience. As it stands, these two songs fail to create atmosphere and distract the listener. Luckily, they are so short that it’s easy to pretend that they don’t exist or to just hit the skip button.

“Landslide Defeater” effortlessly pairs brutality and melody. The furious guitar riffs and breakneck drumming at the end of the song forecast whiplash and hardcore dancing. Then Norma Jean dials it back for a moment with the more melodic-oriented “Full Circle in Under a Minute.” The next song, “/with_ errors,” is reminiscent of material from Meridional with its tremendous melody and memorable chorus.  The song’s short atmospheric sections give off a stoner vibe as the band takes their foot off the pedal.

The band’s truce with its angry side only lasts for a moment. “Trace Levels of Dystopia” rips out of the gate with pummeling guitars and passionate screams. Some of the heavier sections remind me of The Chariot, especially the driving riffs that push the song towards its climatic ending.  Norma Jean usually includes a few laid-back songs on each album. “Translational” fits into this role, featuring mostly singing and thumping bass lines in the background. This slowly builds to a crescendo of noise as Cory screams metaphorically about a man who bursts into flame beneath the sweltering desert sun as those around him don’t understand him or refuse to even try. “If [Loss] Then [Leader]” is one of the more generic efforts on the album. It sounds like a leftover from The Anti Mother but fails to captivate as its chorus falls flat.

“Careen” may be one of the closest things to a ballad that the band has ever written. Combining elements of indie rock with raw emotion, “Careen” was a pleasant surprise in a whirlwind of chaos and violence. It reminds me of “Falling from the Sky: Day Seven” from Meridional, but it is less meandering and has impetus into the final songs of All Hail.

Ominous drumbeats mark the beginning of the end for All Hail. “Anna” is one of the strongest finishers that Norma Jean has ever written for a record (discounting the short acoustic outro that comes right after this track).  The drumming is phenomenal, and the chorus has me hitting the repeat button again and again. The band masterfully uses dynamic shifts and tempo changes to create a pièce de résistance to conclude an already powerful record.

Could 2019 be the year that metalcore makes a comeback?  There are already strong releases by As I Lay Dying, Oh, Sleeper, The Devil Wears Prada, and now Norma Jean.  It’s almost like we’re reliving the early heyday of metalcore. It’s hard to image a world in which metalcore fans don’t eagerly devour this album and come back for second helpings. All Hail is the culmination of a musical vision that has lived on for more than two decades.  I really have only one more thing to say: ALL HAIL NORMA JEAN!