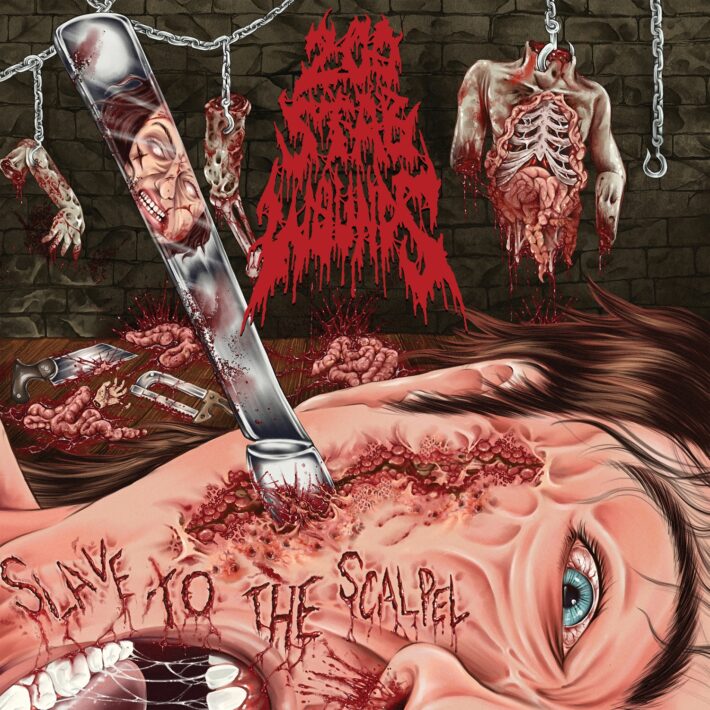 200 Stab Wounds are a Cleveland-based Maggot Stomp death metal band. Last year’s EP Piles Of Festering Decomposition, caused a bit of a stir last year. As a fun, ridiculous pile of relatively simple death metal, this EP served as a promising introduction to this band. It didn’t top my list of best death metal of the year, but I’ve enjoyed the simple beatdown of 200 Stab Wounds fairly consistently since my first exposure. Slave To The Scalpel just needed to be a solid follow-up to pole-vault 200 Stab Wounds to the top of bands following the wake of Cannibal Corpse and others combining B horror movies and clear, simple riffs.

Slave To The Scalpel continued the fun of the band’s first release. 200 Stab Wounds creep towards slam at times, and they have a blast in the process. This group revels in the individual slow notes when they are at their best. All of the gory track titles, the album art, and the no-nonsense song structures create the most memorable moments on this record. 200 Stab Wounds have effectively weaponized single notes. This drenches their best moments in power that most death metal bands require far more effort to achieve.

No instrument stands out on Slave To The Scalpel because every band member does their job well. The vocals convey a sense of gleeful horror in a death metal gurgle that will give every fan a nostalgic tinge. The drums pound away with excellent emphasis. The drum beats won’t shock the audience, but they admirably further the music. The tone of the strings fits the mood well, and each instrumentalist plays with the aggression needed to pull off these sorts of songs.

The band has a habit of taking a simple riff, wrenching up the calamity surrounding the core of their songwriting, and then slamming all of that tension against a rock as they collapse their sound back down to another or the same simple riff. I love it everytime this happens. 200 Stab Wounds have effectively combined the simple, the slow, and the gruesome parts of death metal. At best, their songwriting is genius. At worst, it’s efficient.

Unfortunately, efficiency doesn’t serve as a synonym for quality. I also have some qualms with some of the songwriting choices here. First, the nitpicky parts. Slave To The Scalpel has too many squeals. 200 Stab Wounds can’t lay off them. While squeals don’t have to be a detriment, they ended up annoying me more with each listen. Second nitpicky thing, their slow chugs sound too similar from song to song. I get that technical variety isn’t the reason people will check out Slave To The Scalpel, and that’s fine. But my enthusiasm for this record declined significantly upon re-listens, and a little more variety would have helped a lot.

I raved about 200 Stab Wounds’ simple approach to riffs mere paragraphs ago. Called it genius. Here’s the thing: that doesn’t hold for all of the riffs. The band spends too long staying on the same note at times. Enough riffs are just the same eight note repeated over and over again, with occasional variations. Again, extravagant virtuosity isn’t the point. But throughout Slave To The Scalpel, 200 Stab Wounds live on the line between elegance and boredom. They constantly dance back and forth.

I have little desire to return to Slave To The Scalpel. 200 Stab Wounds are a competent band, and I have no doubt that I will celebrate more of their music eventually. As it is, Piles Of Festering Composition remains the band’s best work. I’d recommend this record to people who’ve ran out of Cannibal Corpse and to anyone looking for the nastier edge of music. The last two years have gorged music listeners on quality death metal. I don’t think that Slave To The Scalpel slices through the competition.