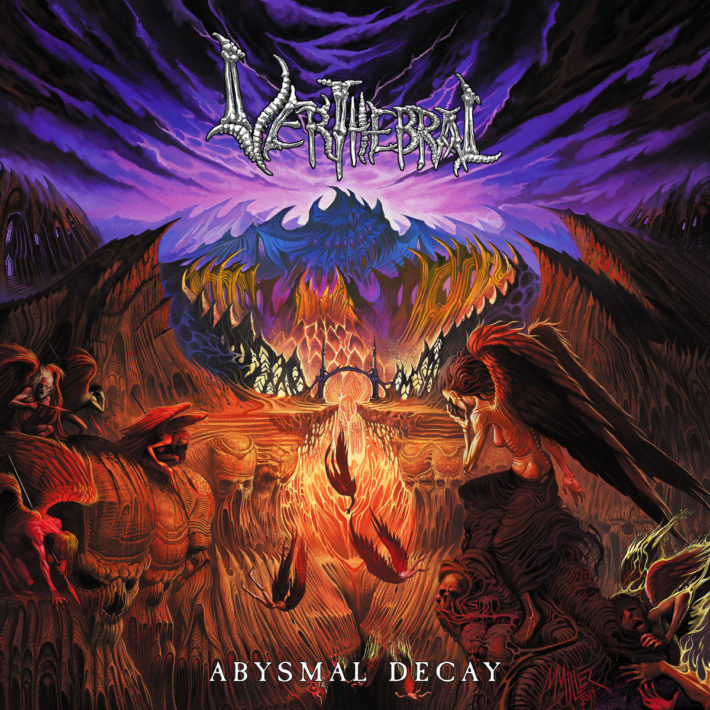 I enjoy my fair share of technical death metal. And brutal death metal. And blackened death metal. And progressive death metal, death/doom, and that recent jazz/death metal fusion album that came out a while ago. However, sometimes one just needs regular old death metal, displayed in its purest form. Like drinking hot chocolate after coming inside on a frigid winter day, there is something nostalgic and pure about listening to a Morbid Angel cover band. Enter Verthebral, whose brand of death metal is so undistilled that one risks diabetes by continuing that analogy any further.

Verthebral’s second full-length album, Abyssal Decay, pulls almost no tricks on the listener. There are a few quiet moments, but for the most part, Abyssal Decay does not deviate even slightly from the old school death metal formula. This album is forty minutes of riff-based heaviness and double kicks. The promotional material for the album calls this “traditionally-rooted riffing” and “relentless percussive hammering,” but you don’t need the adjectives. Everything Verthebral has written here follows the script exactly as you’d expect. Even the guitar solos have an Azagthothian tint to them.

With how important riffs are to death metal, I am happy to report that Abyssal Decay features plenty of fun, meaty melodies with tolerable variety. This music has gotten better on each listen, as I retain more and more of the music I’m more able to appreciate what Verthebral was going for. This isn’t true for all of the pieces of the music (the Azagthoth-lite guitar solos, for example, were overrated when Azagthoth did them, and they’ve only gotten more boring over time), but the riffs are enough to keep the more boring side of the music at bay.

Unfortunately,Verthebral stay so true to the original death metal form that they even retained the worst parts of the genre that led to a pseudo-implosion in the mid 90s. There is aggression here, sure, but it ratchets up quickly in the first song and mostly plateaus for the entire runtime of the album. After not too long at all, the album becomes tired. At its worst, this feels like a color-inside-the-lines death metal album with nothing else added. The riffs are great, sure. But everything else gives nothing other than what you would want at a minimum from a good death metal release. There’s nothing new here, and what’s done well becomes slightly boring as you have to confront that you’ve heard it all before.

Verthebral has to offer something that you can’t get from thousands of other metal bands, right? After all, they got signed to a label and everything. Someone had to see something at some point. Unfortunately, the answer is sort of. While nothing outside of the riffs sticks out as great, nothing is bad either. The vocals are acceptable. The guitar solos are boring (as previously stated), but they’re short and ultimately acceptable. The drumming is stuff you’ve heard a million times before, but at least they switch up the beat every now and then. The ceiling here is low, but the floor is pretty high. There are no glaring weaknesses on this album, even though there is only the one major strength. Consistency like that is difficult, and in some ways this eclipses Verthebral’s inspirations in terms of output. I’d listen to this over a lot of 90s death metal.

If this is color-inside-the-lines death metal, at least Verthebral did a great job of coloring inside the lines and chose fun colors to do it with. If this is hot chocolate, it has tiny marshmallows in it, even if it’s microwaved and kind of watery. This isn’t going to be anyone’s favorite album, but you could do a lot worse than Abysmal Decay when looking for classic, no-frills death metal.