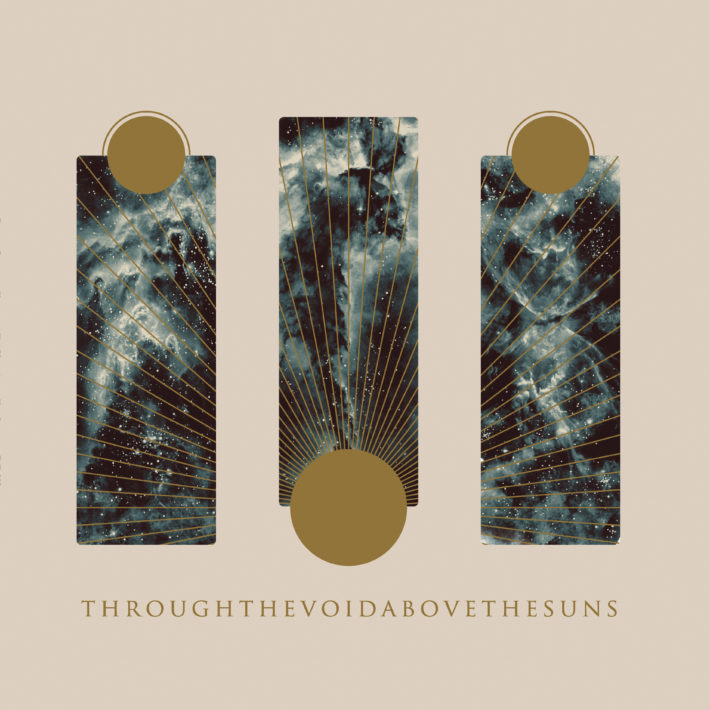 Do you ever feel too depressed after listening to a doom/black metal album? (I know, as if that’s possible ;P) Well, if that’s the case, Deadly Carnage has a solution for you: Through the Void, Above the Suns! After listening to the album for the first time, instead of feeling distressed and anguished, I felt relaxed and comforted. It’s got great compositions and soundscapes, and the band members are very skilled musicians. It’s already been released on March 30th, 2018, but on October 15th, there will be a double color vinyl re-release.

The record is distressing as well as consoling. At times, the black metal-influenced music will make you feel discomfort, whereas there are other times when the music could work as a kind of lullaby. The more relaxed sections are often atmospheric, which even remind of some parts from Deftones’ most recent album Gore. The vocals alternate between tormented, agonizing grunting to a beautiful clean voice, really changing the feel of the music.

The album starts off with Quantum, an ambient intro in which, on top of a guitar and synth, Alexios opens the album with ritualistic chants, immediately catching the listener’s attention. The next song, Matter, immediately starts as a doom/black metal song that reminds of Schammasch’ classic sound. It doesn’t stay the same for more than two minutes though, for even within the first full song the rhythm changes multiple times as time progresses.

Matter fluently passes to Hyle, which, after an intro of groovy riffs and a black metal influenced buildup, develops into a more melodic and emotionally relaxing song. Now I know “emotionally relaxing” is a bit of a vague term, but this is the “comforting” type of music I talked about earlier. The beat is relaxing, the guitars play relatively consonant chords and together with Alexios’ soothing voice, they create kind of a peaceful atmosphere.

It doesn’t stay peaceful for long, though, for in the next few songs the music alternates between more intense, dissonant music and relaxing, calm music.

Fractals is an interesting song that starts with synths that create an awesome ambience, after which a guitar starts playing a consoling melody, together with the bass that lays a foundation full of harmony. On top of that, Alexios sings a beautiful melody in a clean voice. Even though there’s still about fifteen minutes of music left, it kind of feels like a preparation for a beautiful and intense finale.

And those two terms are perfectly applicable for Divide. Even in the heavier parts of the song there’s consolation. It’s a beautiful, melodic and harmonic piece in which the band shows their ability to make both heavy and comforting music, apart from each other and at the same time. They take it even further in the outro, which is a piano solo over some ambient synths playing the same music as the rest of the song, but having replaced the heaviness completely with tranquility.

And with that beautiful outro, Divide could have been a perfect finale for the album. However, the band has decided to put another song, Entropia, on the album. It could feel as if the last song is a bit unnecessary, but luckily, it has an outro that has kind of the same feel as Divide‘s. Instead of a piano, it’s Alexios’ clean voice that closes the record after the other instruments have stopped playing, making for the same ending Divide would have provided.

In conclusion, Through the Void, Above the Suns is a beautiful record which displays great skill in playing instruments, but above all, in creating an ambience that’s both discomforting as well as consoling. It’s got a great structure, alternating between the different types of music. They could have skipped the last song, because the one before, to me, personally, already has the perfect ending for the album, but the last one is also suitable to end the album. In short, it’s a beautiful journey through different soundscapes that have been composed perfectly!