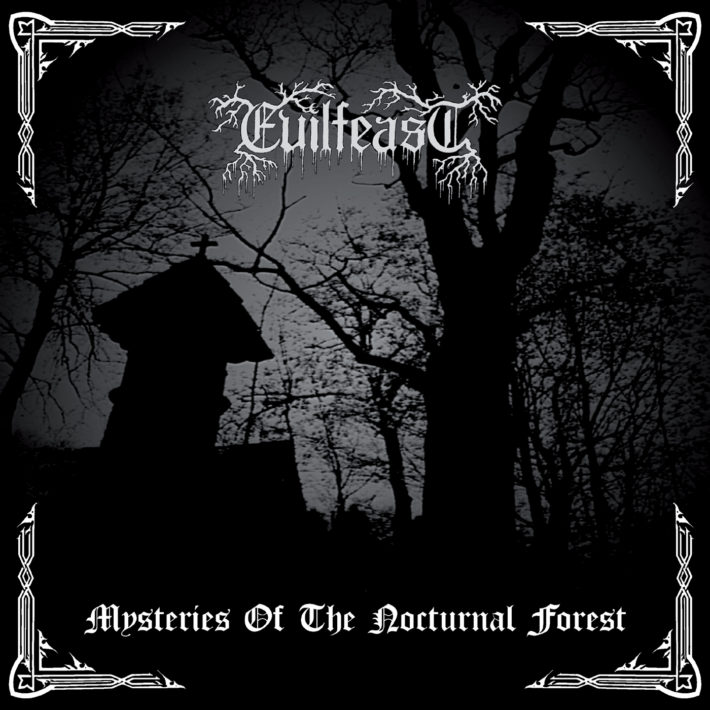 Evilfeast is an ambitious project. Usually when you talk about ambitious in black metal you think of some grandiose or experimental projects pushing the limits of the style, such as A Forest of Stars with their victorian stylings or recent Behemoth with its satanic spectacle both on stage and on record. But the virtue of such ambition and epic vision is emphasized within black metal since the genre cut its teeth on raw, repetitive and simple music. In fact, such primitive stylings gave it its original edge that inspired many luminaries to push the limits of the darkness found within. GrimSpirit, the sole conductor of Evilfeast certainly falls into this category. However, what is interesting here is that this project aligns itself tightly with the original rawness and attempts to push the musical form as far as it can go, while some of the aforementioned innovators reinvented the style while adding many new elements. Evilfeast thus finds itself in a bit of a paradoxical situation – can GrimSpirit have his cake and eat it too?

Full disclosure – I was first introduced to Evilfeast with 2017’s “Elegies of The Stellar Wind”, the project’s sixth album, an absolutely brilliant record that marks GrimSpirit’s vision a resounding success. It’s a record that if someone told you was released in the mid-90’s, you’d readily believe them. Production and sound that seems straight out of the early Norwegian scene, symphonics and synth in the style of Emperor, early Dimmu Borgir or Limbonic Art. But GrimSpirit pushes the capacities hard, weaving 12+ minute songs relying on simple chord progressions, frostbitten guitar tones and magical synths to get that hypnotic effect that black metal is known for spanning at least 60-minute-long albums. It certainly tests the listener’s attention span, but most of the time has no trouble sucking you straight into its world of grim sorcery. It effectively evokes images of dark forests, black castles, evil magic, tyrannic kingdoms and all that goes with it.

“Mysteries of The Nocturnal Forest” is Evilfeast’s second album, originally released in 2004, now re-released by Eisenwald. It gives us a chance to take a look at the roots of this ambitious project, GrimSpirit’s legacy of darkness that brought him to release a record as great as “Elegies of The Stellar Wind”. The first listen immediately makes it clear that he formed his vision quite early and immediately knew what he wanted to do. All the stylings are already here – long, epic songs, tasty symphonics, production as raw as fresh meat and cold, very cold riffs.

However, was the same level of quality achieved so early? I’m afraid that I’ll have to answer this question with a no. GrimSpirit was still finding his bearings here, still lacking the songwriting proficiency that he will master later. Symphonics for instance are here used rather sparingly compared to later, mostly being relegated to intros and short breaks. They’re seldom used to punctuate the full on black metal bits as was done on later records. The layer of synth ambiance is still fully present but doesn’t really stand out much.

I mentioned that Evilfeast uses simple riffs and chord progressions to great effect. But here they seem – too simple? GrimSpirit later certainly improved his game in this department, and while on “Mysteries” he can certainly find that sweet spot that nets a fully immersive effect. But he also often stumbles, providing moments that just go over the listener’s head, making him zone out and forget what he was listening to, ultimately breaking the spell. The problem that then shows itself is that this easily strains the already very taut songwriting. Songs just seem to go on for too long.

But it also needs to be mentioned that these problems don’t apply to all moments. Yes, some will be boring, some songs won’t hit as hard, but it doesn’t mean that there aren’t some highlights. For instance, “Thy Woods are Sacred” and “The Black Heavens Open” are fully worthy of the revered Evilfeast name, packed with compelling atmospherics that easily lead the listener on a journey of classic black metal imagery. To conclude, it’s certainly not a bad record. Aficionados of raw atmospheric black metal and early genre styling will find themselves right at home. It just stands in the shadow of its later legacy, where the Evilfeast formula found here has been perfected. If “Elegies of The Stellar Wind” just isn’t raw enough for you (as hard as that might be to believe), “Mysteries of The Nocturnal Forest” is fully worth your attention.