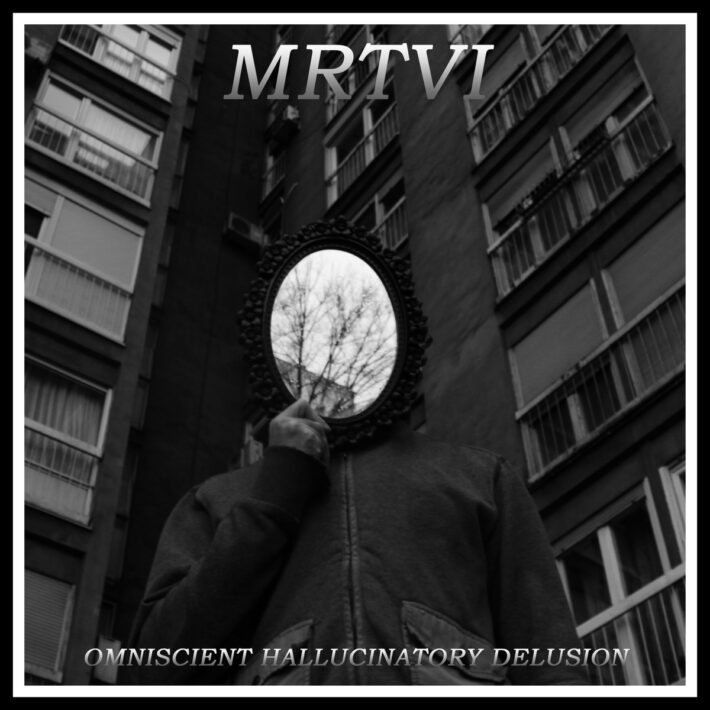 Some artists create music to entertain you, others to tell you a story or share an opinion. MRTVI’s mastermind Damjan Stefanović creates music to

“infiltrate your thought waves, inseminating harrowing sounds that will alter your consciousness” and “take you to the darkest recesses of your mind, carving out memories that have been long subdued.”

MRTVI (Serbian for dead) is an experimental black metal one man project from the UK/Serbia. After having released two full-lengths and some singles, he releases his third album, Omniscient Hallucinatory Delusion this Friday, november 6th. The record’s twelve songs are divided into four chapters. Upon listening to it for the first time, it became clear that Stefanović achieved his goal, as quoted above. It’s so intense and distressful, that I needed some time to recover after the first spin.

In the first chapter, Cosmic Sadness, various guitar melodies dissonantly fade in, over a relatively quiet drum track. There’s some creepy growling sounds, getting closer and closer, building up the tension. The music in this chapter isn’t necessarily ‘heavy’, just really discomforting. There’s about three layers of vocals, each panned differently, giving you almost a schizophrenic feeling. Throughout the chapter, Stefanović’s guitar parts are really technical, proving that he really masters the instrument.

The second chapter, Condemned to Life, starts with some deep breaths. It’s far from comforting though, as sinister effects can be heard in the background, getting ever more present. The effects, both electronic as well as on guitar, seem really fragmented, giving the listener nothing to hold onto. You can hear the obvious industrial influences on Self Slaughtering, the following song: the rhythm guitars and drums sound almost mechanical. The ominous murmuring around you makes it feel like you’re surrounded. No two minutes of music are alike, which makes the composition even more impressive. The final song of this chapter, Chains of Illusion, is the pinnacle of intensity on the record. Its full-on black metal formation gets topped with one long, high-pitched scream, after which overly distorted guitars make the music even harsher than it already was. It’s a powerful finale to the second chapter.

There is No Hope, the third chapter gets introduced with buzzing guitars, after which the intensity of the previous chapter comes back. The vocalist sounds almost as if he’s having a stroke, and this state of mind gets transferred to the listener. In the middle song, Terminal Ignorance, the black metal gradually changes into an a capella passage. Although it still has a menacing atmosphere, in contrast with the rest of the record, this passage brings a moment of auditory calm. It won’t last for long, though, because the chapter gets finished with another unnerving track to finish the third chapter.

The final one, View of Denial, starts with an ambient passage. The soundscape created, in combination with what you’ve already experienced, almost make you afraid for what’s to come. The bass guitar has the upper hand in this passage. There’s melodic vocals, sounding distressed, and its multiple layers give you a feeling of melancholy and paranoia. These vocals are the connection between the atmospheric passage and the full-on black metal part that follows. The album’s finale, Obscured Reality, is filled with lament. The double vocals are joined by a moaning in the background. The track ends with static and pitch bending, which detaches you even from a possible musical scale to hold onto, completely disassociating you from reality.

In conclusion, Omniscient Hallucinatory Delusion is a phenomenal record. Its seemingly incoherent nature, and the various layers of each instrument, together with the horrific sounds, make it a psychological exertion to listen to. You really have to recover after listening to the record, but it’s such a unique experience, that I’d recommend everyone who’s open to it, to give it a listen, from start to finish, for it’s something you won’t soon forget.

Chapter III: There is No Hope