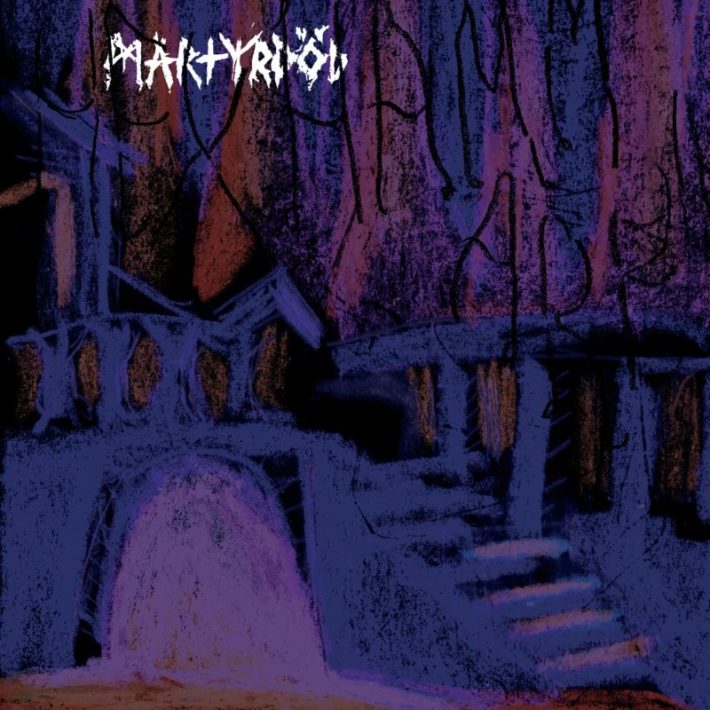 The country of Sweden has something special going on with crust punk. Not only has it given us some of the best representatives of the genre like Anti-Cimex, Skitsystem and Wolfbrigade, but also genre-pushing artist that combined the style with multiple other influences to create something fresh – think Agrimonia, Dödsrit or Totem Skin. Martyrdöd also fall into this category with a firm base of d-beat coupled with black metal, sludge and lately even melodic death metal (maybe of no surprise – think how many members of At The Gates spent a decent amount of time in various Swedish crust bands). This was most apparent with their previous release, 2016’s “List”, which I’d even describe as ‘hypermelodic’. Martyrdöd are no strangers to melodic guitar playing and have always had a certain dose of it in their songwriting (check out this interesting list posted recently on Metal Injection), but “List” went into overdrive, putting the guitars in the front of the mix with the mid-range polished into a razor-sharp edge. With “Hexhammaren” they opted for a more subtle approach in melody. Is this an improvement or a step-back? Let’s find out.

The pendulum has this time shifted towards the hardcore aspect, with rhythm becoming the main driver of the songs rather than hyperactive guitar wailings. This shift is probably the most apparent in the change of production – on “List” the guitars were by far the most prominent element while on “Hexhammaren” it’s the vocals (interestingly enough, both albums were recorded at Studio Fredman by Fredrik Nordström, suggesting this might be a deliberate switchup). Not a bad move, as Mikael Kjellman’s vocals were always a special category of enjoyably abrasive and furious, and on “List” they were perhaps a bit too background so giving him some more space here is welcome. Putting the guitars a bit further back accordingly shifted the songwriting focus. The guitar melodies are a bit more reigned in, slower and not as loud. There is a sort of difficulty in this because the inattentive listener might mistake them for simple garnishing on top, but they still play a crucial role even though they now have to share it with the rhythmic drive.

The album opens with the title track which is a straight crusty thrash riff romp. Interestingly enough it’s visibly not the top of Martyrdöd’s songwriting game, but they’ve arguably always had a tendency not to reveal their hand too early. Still, its energy makes it a great opener. “Rännilar” is an interesting one for me, because I think encapsulates the reservations I have with this album. The melody work is superb, even though it’s noticeably subtler than before. However, I was expecting the song to step up and turn into a hypercharged explosion of intensity that Martyrdöd has been known to do. Instead it ends abruptly. Pondering on this I realised a crucial point about this album – there are no stand-out tracks like on “List”, no Harmagedons or Handlost Fallen Angels, absolute shredders that will have you swimming with euphoria at their peaks. While such songs on “List” would punch you straight in the face whether you liked it or not, songs on “Hexhammaren” might require you to adjust your cheek a bit before the blow connects.

But I still think it’s possible to have a positive outlook on this. There are no stand-outs, which only means that the quality is uniform across the album, which is once again something that a majority of albums can’t say for themselves, instead flowing in a dance of peaks, duds and ok’s. And the level of quality here is certainly high. There’s decent variety too – for instance the despairing rage of “Helveteslarm”, the ‘ugly beauty’ of “Nästa Syrien”, thrashiness of “Cashless Society” or even the plodding tempo and baritone cleans of “Pharmacepticon”, a song that almost sounds like an At The Gates b-side (which doesn’t means it’s a bad song, it’s great!).

At first I was taken aback by “Hexhammaren” because it didn’t give the instant gratification that so many relistens of “List” reliably secured. But I’ve grown to like it – there’s a lot of very good stuff happening that isn’t immediately apparent. Perhaps it was the production change that made this an album that you had to chew through a bit harder before you got to the taste that was still godly. But even though I was sceptical about this change of approach and was ready to label it a regression, I’ve grown to appreciate it, and I hope other listeners will too.