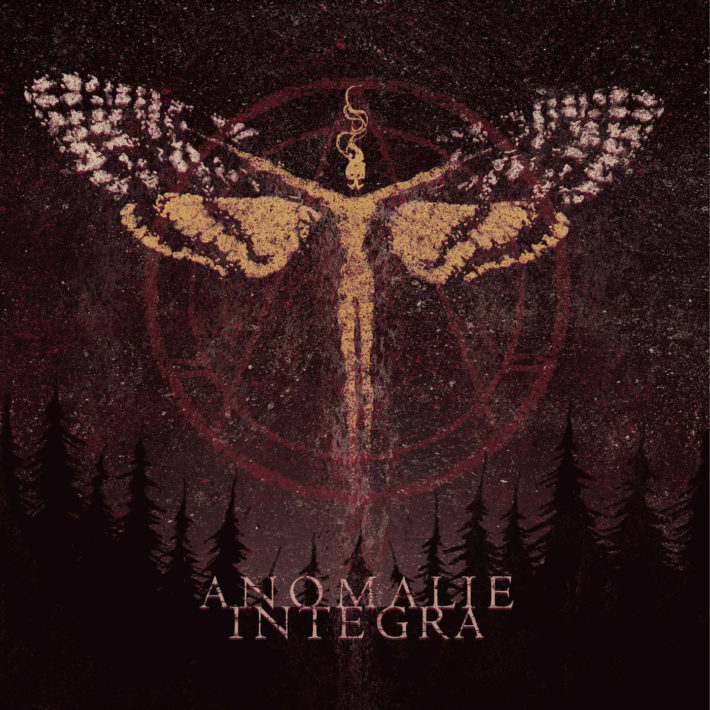 Do you like music with ritualistic chanting? Poem-like verses? Atmospheric soundscapes that make it seem like you’re in another place? And all of that while listening to a surprisingly groovy black metal record? Well, don’t look further, because Anomalie’s new EP Integra has got it all! The post-black metal band from Austria has been active since 2011 and has already released three full-length albums. Now, another EP is released to reinforce their already solid discography.

One of the first things that stand out when listening to the album is the band’s ability in creating atmospheric soundscapes. On Rebirth, the album starts off with an ambient, low sound; deep, minimalistic drums; a choir singing a haunting melody; and the sound of water dripping. The first three aspects already make for a dark and abysmal atmosphere, but the echoing water drops complete the image of a large cave, taking the listener to another place even within the first minute.

Even though Anomalie’s mix between black metal and more post-black soundscapes really remind of their fellow countrymen Schammasch’ signature sound, each band has their own, distinguishable sound, emphasizing on other elements of the music. One of these distinguishable aspects of Anomalie’s new EP is the ‘grooviness’ of each individual song. For me, personally, groove isn’t the first thing that comes to mind when thinking about black metal, but I can’t help but using it for describing the music. The most important instrument in creating this characteristic is the drums. Apart from the classic black metal blast beats, or actually within, there’s a main drum beat that’s easy to follow and great to bang your head on. Temples is a good example for this. It has an ambient intro that consists of a guitar and synth subtly creating a haunting atmosphere until all of the sudden the rest of the band joins in. It’s a great, intense and aggressive black metal song and within the fast and technically challenging drums, there’s a clear drum line to be heard, making the music really easy to follow and accessible for people who aren’t accustomed to dense black metal.

Another really interesting aspect of Integra is the vocals. They’re so diverse that it’s hard to believe all voices come from one person. There’s parts where Marrok, the mastermind behind Anomalie, recites poem-like verses, there’s ritualistic chanting (on Rebirth, for example), there’s a polyphonic choir, and there’s aggressive shouting. A great example for the diversity in vocals is Aurora, on which almost every type of voice is used. In the intro, there’s a kind of spoken word on top of the other instruments and after a while, Marrok’s deep, raw voice can be heard. Later, there’s a choir that accompanies his ritualistic chanting and during the outro, his voice gradually gets more and more intense until he ultimately screams in total aggression.

In conclusion, Integra is an interesting record with a great structure, variety, and even groove. While the atmospheric aspect of the music is very well done, it doesn’t lack intense, more typical black metal passages either. The vocals are really diverse, making the album even more appealing to listen to and the soundscapes immediately move the listener to another place. All this variety, together with the cool melodic riffs and the general groove make it an accessible album for people who’d like to get into the genre. Moreover, the fact that Marrok has been able to put so many types of music on an EP that doesn’t even last half an hour is proof of his exceptional musicianship!