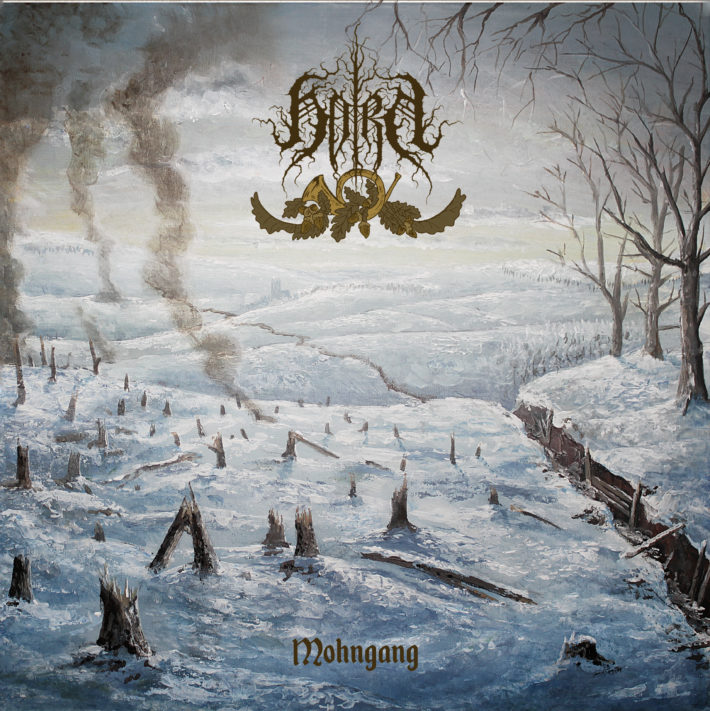 Mohngang is the eighth full-length release from one-man German band Horn. Nerrath, the member of Horn, plays a very melodic strain of pagan black metal, complete with some classical string instruments and horn instruments (shockingly) sprinkled throughout. The promotional material claims that Mohngang was made with “a serious folkloristic approach far from the jolly drunken Viking tunes celebrated in the nowadays metal scene.” Despite this earnest aspiration, Horn still ends up with a whiff of Amon Amarth around the corners of their album.

The opening track “Einleitung- Der Wettlauf zum Meer” contains just a solo cello, and this choice sums up the album’s biggest strengths and biggest flaws. For the strengths, this creates a haunting atmosphere. Despite the music never growing louder or more intense, a foreboding feeling festers throughout the first half of the track. The listener knows that this is a metal album, and Horn leverages this to create a build-up of subtle tension. Eventually it violently erupts into the second track, “Satt scheint der Sud der Tat.” This second track isn’t actually loud or aggressive in comparison to the rest of it’s black metal brethren. However, the somber nature of the opener and it’s resultant heightening of the listener’s attention causes the second track to feel much louder and more aggressive than it actually is. Throughout Mohngang, Nerrath is able to create large moments with small movements. This is the sort of songwriting that masterpieces are made of.

“Einleitung – Der Wettlauf zum Meer” also lays bare the second big strength of Mohngang: Nerrath’s melodic prowess. Unaccompanied music is difficult to make interesting, due to the lack of tools at the artist’s disposal. This isn’t an issue here, at least at first. Nerrath is able to write simple and engaging music that stays in the listener’s ear. Later in the album, his excellent clean singing helps this along, as the blues growls on top of his blessedly earnest voice grabbed my attention upon first listen and has not even remotely started to get old.

I promised flaws as well, and flaws there are. I’ve alluded a few times to the excessive length of the introduction, which lasts for over four minutes. The entire album lasts for just under fifty minutes and feels much quicker than its actual length, so that’s not the issue. Instead, the opener drags out beyond what it’s good for. All that tension I described builds for the first two or so minutes, but eventually the listener adjusts and everything just goes back to a balanced state. The first track should have been either half as long, or featured some sort of harmony, or done something else to maintain interest for its entire length. There’s a reason that intro tracks aren’t usually four minutes.

Throughout Mohngang, similar inexplicable decisions plague what could have been a much better album. The clean singing is great, the growling is acceptable, and both are used equally. The melodies are the core of the tracks, but too many are given too much weight for too long before being given harmonic support. Horn have given us an album with the potential to be listed on end of decade lists, but there are some bullet wounds in the album’s feet preventing it from reaching that potential.

Mohngang is a beautiful album with some ugly seams. I was originally drawn to this because of the intriguing melodies, and the beautiful singing bolstered my excitement. Horn delivered on everything they promised, but it still felt like this could have been better than it was. On a bad day that feeling overshadows the very real accomplishment of Mohngang.