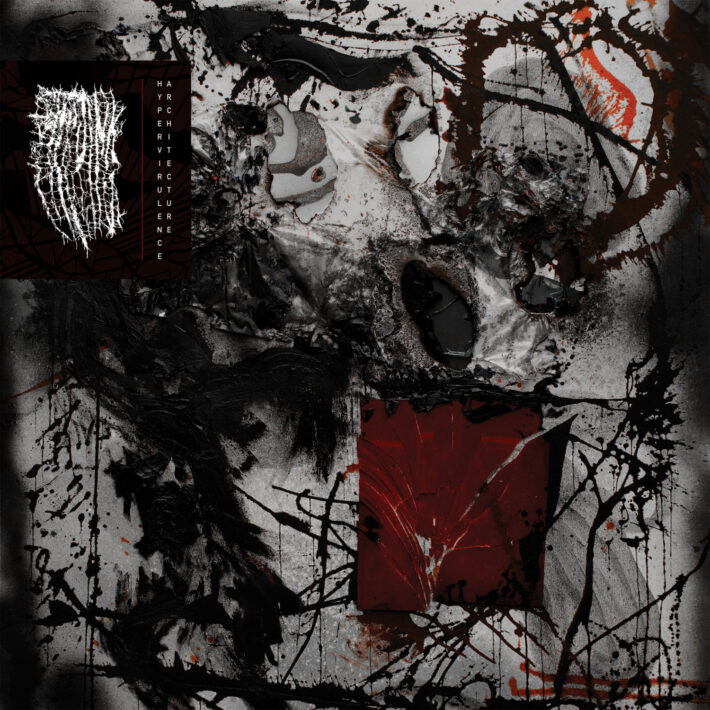 Hissing play dissonant death metal with a focus on exploring what the sound can offer. The band spawned from Seattle in 2014, and in 2018 released their first full-length, Permanent Destitution. That record wasn’t bad, but I haven’t returned to it too often and the music eventually got relegated to a fond blurry memory over the next four years. Hissing now returns with Hypervirulence Architecture, and they fully have my attention.

Hypervirulence Architecture starts off with standard fare death metal. Simple guitar riffs lay beneath average death metal growling and over blast beats and a bass line that only serves to deepen the guitar’s sound. Cavernous death metal springs to mind. But then these songs quickly veer off course. Riffs start to stutter and distort, time signatures curve into odd dimensions, and eventually the dissonant walls crumble to nothing before being rebuilt anew.

Throughout the record, I can take or leave the vocals. Every other instrument shines. The drums provide an excellent backbone, and while the blast beats occasionally get too repetitive, these pounding rhythms lead the way towards the quicksand reformation of the record’s melodies. The guitars are excellent both when playing chunky death metal riffs and when forming an elusively creepy atmosphere. The bass provides additional dissonance and fills in the sonic gaps that prevent light from shining through the walls and ruining Hissing’s hard-earned atmospheric effects.

Hypervirulence Architecture took time to grow on me. At first the record felt meandering, but eventually this turned into traveling with purpose. The promotional material claims that their sound is “Nightmarish and trance-inducing,” and while the record felt like mush at first, eventually the nightmare grew. The riffs were always good. Hearing them morph over the course of the record as the structure of tracks upheaves and collapses became a joy.

Hissing have not really made a record with an easy standout single here, and while that’s partially due to the overall quality of the record, some blame has to go to Hypervirulence Architecture’s style. When Hissing say that they are “exploring the outer limits of death and black metal,” this doesn’t translate into a wide variety of sounds. The band does some interesting exploration within a narrow plane. But in tight confines they begin to sound same-y. This record is less exploring death metal’s limits, and more needling one location until those limits collapse. Additionally, the shifting, deteriorating approach to songwriting naturally lends these tracks to less variety. I enjoy tracks like “Intrusion” and “Identical To Hunger”, but they aren’t exactly wildly distinct from each other.

The other side of Hissing’s focus on atmosphere is their lack of focus on heaviness. Thee band shows that they are perfectly capable of chugging with any cavernous death metal band around. But this isn’t really the focus on Hypervirulence Architecture, and such an approach is swiftly discarded when no longer needed. While this ultimately serves the music, it does make for a record that seems to pull the rug out from under itself until you become familiar with it.

With Hypervirulence Architecture, Hissing have joined Altars, Artificial Brain, Dischordia, and others in a large pile of solid dissonant death metal albums. Where it ranks among these can only be told with time, but for now this is a record that I will enjoy returning to. I recommend this to anyone who wants more music like the above-mentioned bands, or anyone who wishes death metal could do more with their sound. Anyone who wants blood-pumping music may not get what they’re looking for here. Hissing have a good thing going, and I can’t wait to see what they do next.