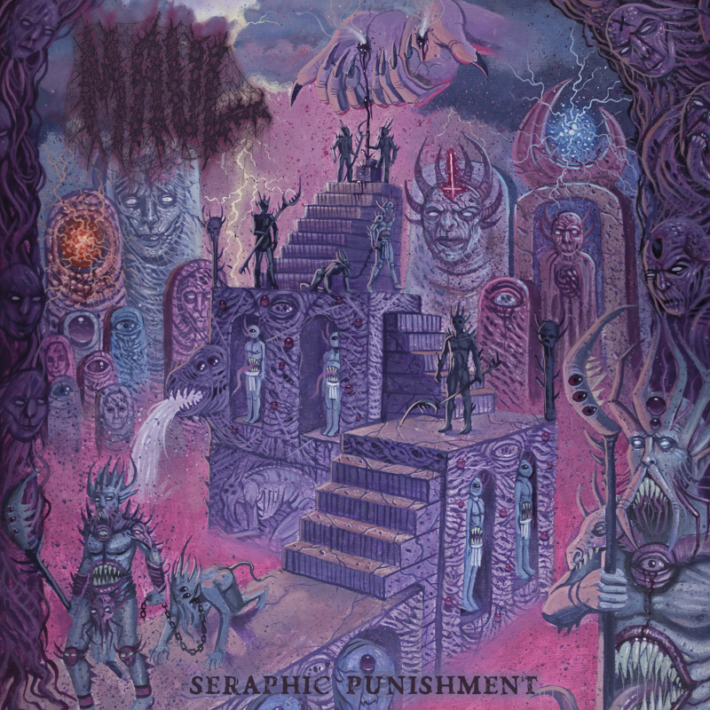 One of the best things about death metal is that it’s very hard to screw up. Consequently, it’s also more difficult to create something extraordinary, but as a result the average quality tends to be fairly good. That is to say, even when death metal isn’t amazing, it still tends to be pretty good. Maul is one example of this phenomenon.

Maul formed in 2017 and hail from Fargo, North Dakota. They’ve released three demos, two EPs, and three splits to date, but this year they are unveiling their first full-length, Seraphic Punishment. Maul play a stripped-down, straight-forward style of death metal that draws influence from thrash metal and hardcore in ways you might not expect. Maul’s number one “similar artist” on Metal Archives is actually my buddies in Wretched Inferno, and while I don’t entirely agree with their stylistic similarity it’s nice to see the kiddos getting some love on the Archives. Anyway, Seraphic Punishment is a fun record that supplants ingenuity with energy, dynamics, and groove.

This record falls somewhere in between the caveman death metal style and the more polished American OSDM style. Noticeably many songs hinge on heavy breakdown-style riffs, but not in the same predictable way that hardcore does. Maul will start stomping almost at random, laying crushing riffs back-to-back, with plenty of mosh riffs thrown in for good measure. The opening track sets the tone, as after a single verse they pump the brakes, only to build back up with a neck-breaking riff and lead out with a spooky repetition. The stand-out single and title track features the most riff variation, and the most memorable guitar lines on the album, with tremolo-picked leads and mid-tempo stomps with guttural vocals on top. “Repulsive Intruder” hits the gas with intense half-time sections, and adds some driving energy to the flow of the record. “Deity Demise” and “Buried in Resin” offer hard-hitting riffs at a steady pace, before “Oracular Burial Grounds” stomps the listener over and over. “Infatuation” hits with some of the most energetic riffs on the album, before collapsing into a monstrous crawl. The closer “Carrion Totem” ends on more hard-hitting riffs and an atmospheric fade out.

While Seraphic Punishment is a polished, hard-hitting, and consistent death metal album, I couldn’t help feeling like I wanted more. Maul aren’t afraid to sit on a riff, which may be part of why I felt underwhelmed at times. They can seem to overdo the stomp-y mosh riffs, and the slow sections can linger a little too long. There wasn’t a lot that really impressed me, despite being an enjoyable listen throughout. I feel like Maul would be a fantastic band to see live, while this studio offering ends up being simply some good old fashioned death metal.