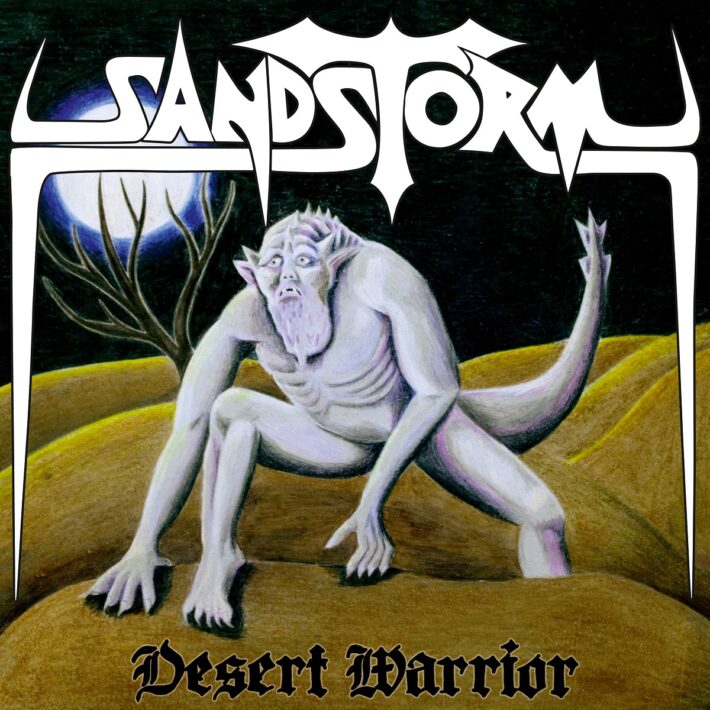 Desert Warrior is the second EP by Sandstorm, a Canadian power trio, who made their debut in 2019 with Time To Strike; clocking at about twenty minutes, with four concise songs this release shows what the band has to offer.
So, for my first article of 2021, let’s see what the latest work by PJ “The Butcher” LaGriffe, Reptile Anderson and Stevie Whiteless is about.

Desert Warrior is a mix of hard rock and heavy metal, and one might say that these guys have carefully listened to Deep Purple’s teachings. In fact, the groovy riffs and galloping interludes are quite impressive, and the bass and guitar make it clear that they are the stars of the show.

At first listening, then, this EP is pleasant and overall fun to listen to; its shortness definitively plays in its favor, as it prevents even the sole idea of it being boring.

However, the more you listen Desert Storm, the more you notice that there seems to be a lot of potential… that ends up going nowhere: this EP always seems to be on the verge of evolving into something with much more grandeur, and yet it “only” turns into a better-than-average release… which isn’t bad at all, but you keep thinking that they could do so much better.

There are parts when it feels like the guys have cut themselves short, like they could have gone the extra mile and produce a truly memorable passage, instead they stopped too early. In fact, something truly memorable is exactly what this EP lacks, and what could be have been able to elevate it from an enjoyable underground work to a must-listen hidden gem.
At times it’s even frustrating: there’s the potential for some great Rainbow-like epic, but they simply never make the jump, though they always get close to the edge.

The first two songs, Desert Warrior and Eat Me Alive, are the best example of the problem of this EP: entertaining premises in the form of catchy melodies that lead into nothing particularly noteworthy.
Evil Wins is by far the song that tries to take off the most – and it succeeds, but only partially: great capacities are shown in the verse, yet they are not employed to their the full extent and after a great build up, the gained momentum gets lost in the chorus.
The last song, Power of the Pyramids, has a distinct Egyptian feel (Powerslave, anyone?) and it is built around a good riff (and a nice solo) but again, it can’t escape the aforementioned issue, though it does provide a great closure with its retro sci-fi atmosphere.

In conclusion, Desert Storm is not a bad album by any means, nor is it rushed; it’s a good EP, short enough to be enjoyed, made by a promising band that can reach far higher peaks, and thus should strive to do so.
One thing that I won’t be able to forgive though, is an album cover this bad. Like, come on guys, even if you want to stick to medieval-like art, you can do better than this.

My last reflection upon this, is that I really don’t want to diminish the good job these guys have done – I like some of the instrumental passages, and nowadays it’s not that common to find a release that is just the right lenght; but these are the very reasons why I want to see them reaching their full potential in the future, and create something that will never leave the listener’s head; based on what we’ve heard here, it’s clear they can achieve it.