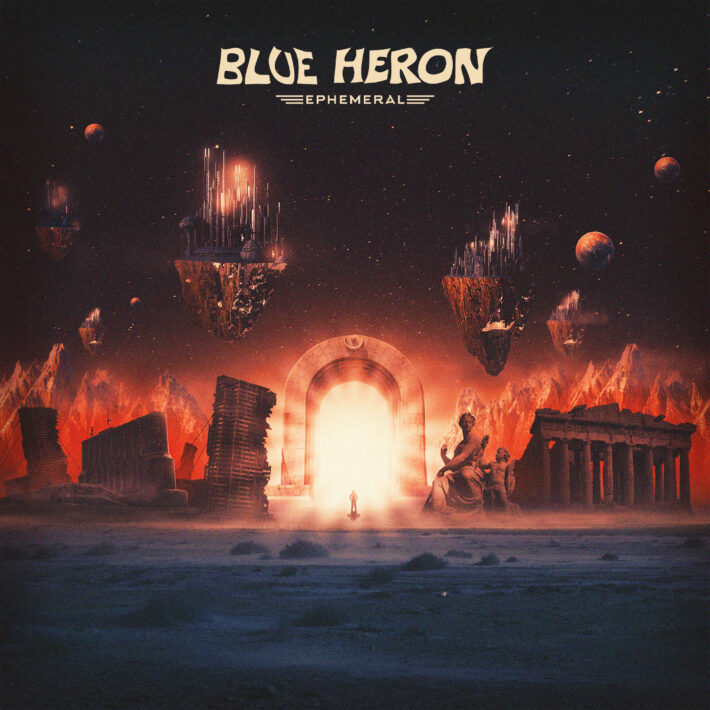 I dug greedily through the promo box for upcoming albums over here at Metal Utopia looking for something to review.   Bobbing there innocently in a sea of gory death metal names, the obligatory yet unintelligible umlaut laden black metal monikers and the comedically punny weed centric stoner doom band appellations stood this simple yet different band name Blue Heron.  “Sure, why not?” I thought.

As I opened the promo package I was happy to see band photos of friendly, bearded, beer drinking guys who seem to be fans of Big Trouble in Little China.  I surrendered that I would thumb a ride on the Pork Chop Express with these guys and dropped the needle on Blue Heron’s debut album Ephemeral.

After a few times down the highway with this album some things stood out to me.  It quickly became apparent that although Blue Heron waves a flag of desert stoner rock, they are more than that.  This is truly a band that is a jack-of-all trades.  They show many different speeds and trim packages.  They are at home in a desert rock and roll vibe then can shift gears and fall back into a fuzzy, almost atmospheric riffdom.

The second song on the album Sayonara really is a showcase of the different sounds and the overall diversity of the various corners of the genre they can occupy.  At over 13 minutes this song is a big hunk of beef.  Much like The Old 96’er in the Great Outdoors it will stuff you to the brim.  The reverbed vocals in the beginning of the song paints a setting of a sun scorched dry heat. The sweeping tremolo and an echoey lead guitar outline this long format tune that tends to keep one foot on the atmospheric.  Cleverly, the guitar doesn’t seem to jump out when it is time for it to lead the way, conversely the bass seems to have a bit of simplified retreat and let the six stringer solely occupy the space they previously shared.  The wandering and drifting guitar floats through space adding color to the shapes and dimensions built by the bass and drum.  Around the 7 minute mark the song makes a drastic shift into the subtlety muted and muffled; were the other instruments fall away to focus on a bass and drum accented Planet Caravan infused jam.

Although the song is well executed it seems a bit flawed conceptually, which sadly becomes a bit of an ongoing theme across the album.  Sayonara, like many of the songs throughout, feels like an array of bite size samples instead of a harmonious chef’s signature dish.  It is important to show musical ability and diversity, especially on a debut, but not at the sacrifice of the end product.

Push the Sky is by far the most accessible, banger of a song.  It shows the drummer’s raw ability to find inventive and ornate pockets to dance in, in what formulaically seems like an otherwise simple song structure.  The lead singer shows his chops by ramping up with the song to an almost hardcore punk feel of aggressive evocations.

The drums have an incredibly large, thundering presence on this album.  Their powerful and cavernous booms are a driving force to many of the songs and fill in many nooks and crannies to give them a full, fleshed out aesthetic, adding complexity and intricacy.

The band as a whole plays effectively as a tight unit.  They know when to slow things down in a floating wash and when to stomp on the distortion pedals to get right in your face.  The lead singer possesses this same ability to metamorphose by seemlessly shifting from an almost 90’s sweeping alt rock croon to an edgy hardcore infused growling gruffness.  This band plays from their heart, it’s genuine and can’t be faked.  This music is in these guys, it’s real.

The production on Ephemeral sounds very professional and clean to my ear.  Nothing is buried or lost in the mix, all the instruments are layered and deep yet monopolize their own defined space.  This sharp execution gives Blue Heron a platform to stand on to show how they can shift and change seemlessly between a myriad of inflections and tonal styles in their songs.   Impressive production, especially for a first outing.  All too often debuts sound cheap and good enough, I don’t feel as though anyone settled or compromised on this album’s production – all in, top to bottom.

Ephemeral as a whole sounds exactly like what the cover art would dictate.  The listener is the silhouetted figure who is transported through the portal of Blue Heron’s music to a desert soundscape that has chunky, floating vignettes of different motifs and sounds passing by.  Personally, I would like it a bit better if Blue Heron sank its teeth into some of these feelings and styles and made a greater declaration of their own unique sound and identity.  The album truly is a showcase of their diversity and ability, but at times feels a bit uncomitted and atmospherically amorphous, lacking a cohesiveness.  With such a range of different sound styles and textures it all seems to get blended together.  A good listen, but many songs have a tendency to fade into one another without much differentiation between them.  If you light off every fire work at once its hard to appreciate each cracker’s individual beauty.  Blue Heron we can see that there are many things you can do well, now reach deep into your six demon bag and pull out something magically amazing, I’m ready.