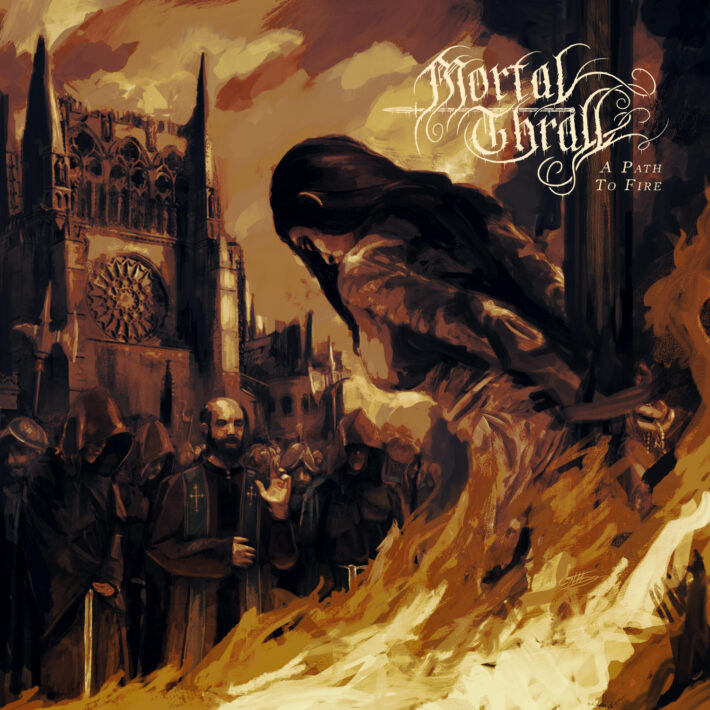 A Path To Fire is the first full-length release by Tennessee group Mortal Thrall. This band consists of Christopher Davis, who plays keyboard and synths, and Todd Harris, who apparently plays almost everything else. They play a form of post-black that they claim is “Baroque-influenced.” This ends up being more of a reflection of the themes of the music rather than the songwriting approach, as A Path To Fire is a warm, emotion-focused record with passion and slow crescendos.

A Path To Fire is a concept record linking the death of Maria de los Dolores Lopez, one of the last people to be killed for heresy as a part of the Spanish inquisition, to the ordeals that many go through today due to the same oppressive forces that have persisted like nuclear radiation over a blighted landscape. I can’t understand any of the lyrics, as this is post-black metal, but that doesn’t matter. The passion of this project comes through. It’s worth noting that these issues are deeply personal to the band, and they keep that personal touch front and center throughout the record.

Those slow crescendos keep A Path To Fire from vanishing in smoke. “Passion Made A Weapon” and “One Soul, One Sky” stand out as the best moments on the record. However, other tracks, such as “Take The Cold,” contain glorious choruses and righteous fury as well. Mortal Thrall have done an excellent job of translating emotional honesty to their blackened and charred music. The heights of this record remind me of groups like Ethereal Shroud.

Some of the small moments successfully land as well. I quite enjoy the old-timey feel of the intro track, which has plenty of relaxing and well-formed strums before disintegrating into the title track. But Mortal Thrall knows their strengths. The vibrant riffs keep the heat up on this record and make everything sound emotional and alive. From track to track, the band will switch up writing varied and interesting riffs that lead the way with creating sheets of post-metal vibrance.

The vocal style doesn’t really hit me well. Harris does a good enough job, but vocal lines throughout A Path To Fire stick out from the rest of the music and feel awkward. This only pops up sometimes, but when it does it breaks the immersion of the record. At other times the vocals blend perfectly into the guitars, so this may just be a mixing issue. The drums have a similar issue. They are played well enough, but something about the production makes them sound lifeless and faint. Mortal Thrall probably didn’t want to overwhelm the record with blast beats, but a different sound would have been nice.

Those are easy problems, but there is a far deeper issue with A Path To Fire: It just isn’t memorable. Mortal Thrall has created a solid black metal album with intriguing and well-done selling points. But I have reviewed a multitude of records with this description and most have faded from memory into a giant soggy ball of mud. The emotional depth of A Path To Fire is striking, but the songwriting sits comfortably within the standard space of post-black metal and never lights the kindling of the emotional undercurrent. All those small moments and sheets of vibrance don’t do enough to make Mortal Thrall stand above the fray.

A Path To Fire is a worthwhile album to spend your time on. The emotional resonance is powerful and meaningful, and the music remains solid throughout the record. I just wish it more consistently rose above solid. In any case, Mortal Thrall have built a fine foundation that they can grow a marvelous series of records on top of. I recommend this to anyone who enjoyed the newest Kauan or Ethereal Shroud records, you’ll find something strong here.