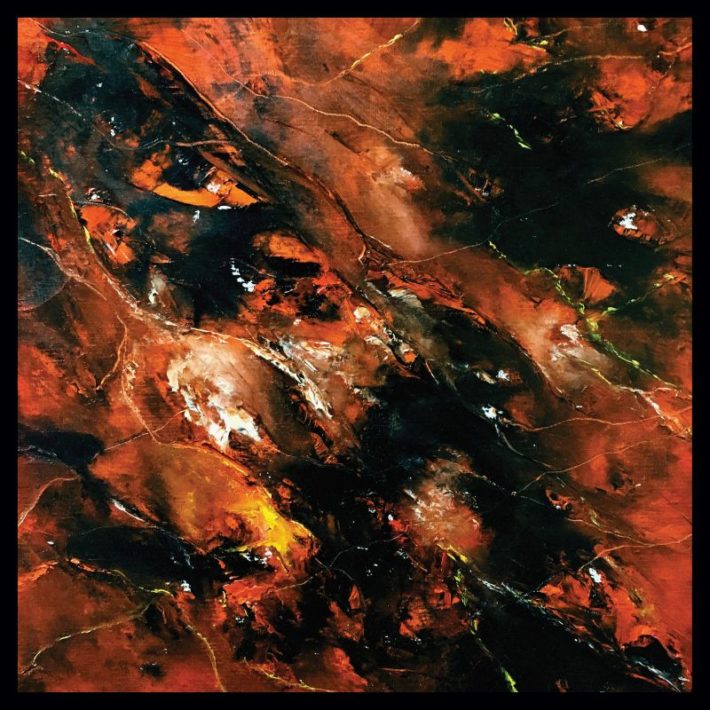 Jordablod is, in my opinion, quite a deceptive band on the surface. First time I heard their debut, “Upon My Cremation Pyre”, I was in the mood for some knuckle-dragging raw riffage. And where does one go to get that? Why, the Iron Bonehead Productions catalogue, of course! Oh, look, Jordablod, a band with an incomprehensible foreign name (actually Swedish), yeah that’s sure to get me my sewer-produced black metal fix. And when the music started, what do you know it sounded like it was recorded with a 4-track out in the woods. Just what I needed. But boy was I wrong.

I kinda zoned out while listening, doing something else. But something became clear after a song or two. This aint just pure filth for the sake of filth. Beneath the layers of murky production, something was going on. Actually a lot was going on. Soon I realized we’re dealing with quite adventurous songwriting and bold, yet masterful guitarwork. Some unhinged, psychedelic-rock-inspired narrative was unwinding within the songs. Needless to say, I was enthralled.

So you bet I jumped right on when I saw Jordablod was releasing their sophomore record. I wanted more of that entrancing black metal that chose to depict madness not through total dissonance and chaos like many other bands do, but employing it in a much more subtle way. So here it is, “The Cabinet of Numinous Song”. Ands it’s another quite perplexing record, especially when compared to the previous one. The production is somehow both better and worse at the same time. Much punchier and coherent yet even murkier than before? The songwriting is even more disjointed, but somehow feels tamer? Man, this band doesn’t stop surprising.

So anyway, let me try and put this into some intelligible words. “Cabinet” continues Jordablod’s style of offbeat exploratory black metal packaged to seem more innocuous than it really is. I think it works great for them and reminds me a lot of the band Morbus Chron, who take the classic death metal sound and launch it into some weird astral realms. Yet this time it seems they chose to consolidate their sound a bit. The production is heavier on the low-end this time, compressing the general tone but having it feel unified. I personally preferred it when it was all over the place but I understand the decision.

This lets the song feel much more straightforward. It’s still a mystical voyage, but less of an LSD death-trip and more of a journey through the realms beyond with along a delineated path, even though the path proceeds along things the human eye was not meant to see. Quieter and atmospheric sections seem much more prominent, letting the listener breathe and take in what they’ve just heard. The riffs feature much more melody and less sudden harmonic shifts. I’d call it, I don’t know, a bit more modern? Like the inspiration is no longer derived from 90’s black and death metal and early psychedelic rock, but from later refinements of these sounds. In any case, this can certainly be interpreted as sign of maturation.

All in all, this band just doesn’t stop fascinating me. From the surprise of the very first time I’ve heard them, across the mind-altering effect their music has, to the ambivalent response I’ve had to this album. “Cabinet” is a terrific piece, possessing all the qualities one would expect from Jordablod. Yet I’m still drawn to the much wilder character of “Upon my Cremation Pyre”. I can’t say I’m disappointed, hell, I can’t even say I wanted something else. I’m perfectly content with what we got, but some urge remained. This manifested in me listening to both albums back to back, sometimes even with intermingling songs, multiple times, to compare and contrast them. And boy that was an intense experience in itself. In a way, the ambiguous, unexplainable nature of Jordablod’s music manifested in the very act of listening to them. And that’s something I absolutely love in a band – when they push the envelope not just with music but with the listening experience itself. That’s just some genius stuff in my opinion.

Tracklist:
1. A Grand Unveiling
2. The Two Wings of Becoming
3. Hin Ondes Mystär
4. The Beauty of Every Wound
5. Blood and Rapture
6. The Cabinet of Numinous Song
7. To Bleed Gold