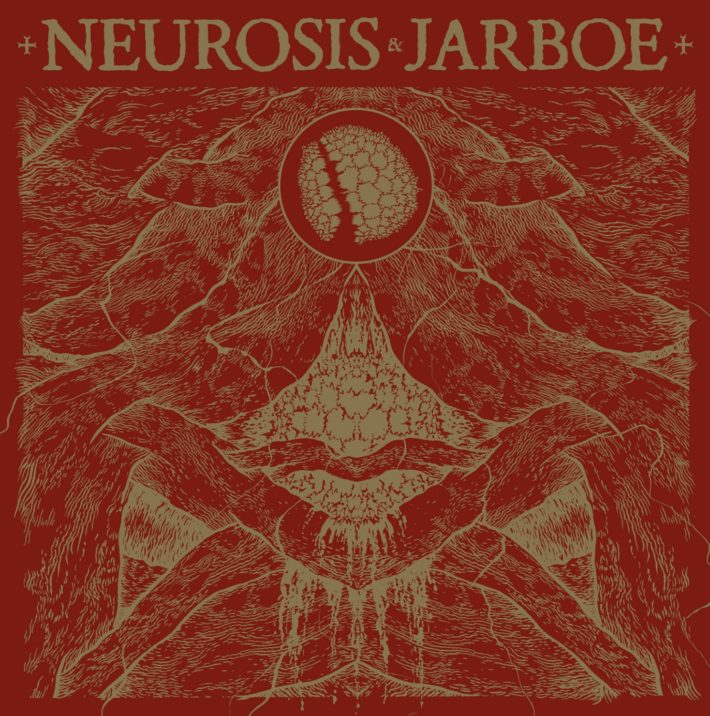 Full disclaimer: both Neurosis and Swans are some of my favourite bands of all time. So of course, why wouldn’t I be interested in a collaboration between one and a key member of the other? Well, things are not so simple. And well, for no good reason. I’ve always taken both Neurosis and Swans albums in strides, listening to one intensively for months before trying out a new one. It might’ve been a sort of tactic to make the bands I’ve been so enamoured with “last longer”, so to speak. But there was something else afoot – both bands aren’t exactly accessible and they both make intricately detailed music that takes a while to “get”, even when you’re listening to a new album before already hearing a dozen of their other ones. Considering all this, I’ve actually never properly listened to “Neurosis & Jarboe” until now, even though it was first released in 2003, way before I was even taking music in general seriously. I did try it, but it seemed too abstract, too experimental, too removed from what I liked about the original artists. Well, let’s just say I now realise that was one huge mistake.

There was an interesting interplay of influences between all parties involved even before this collaboration happened. Neurosis were always influenced by Swans and it shows in their approach. Jarboe fell in love with Neurosis and met them after attending their concert, after which the collaboration happened. It also needs to be noted that Jarboe wasn’t a permanent member of Swans, bringing her peculiar style only to their mid-era output. She brings this style in full force on this record, and coupled with a band that is already somewhat a sludge metal variation of Swans, the results are interesting.

Collaborations and supergroups can often end up an incoherent mish-mash of individual members doing what they’re always doing in their main bands, with styles clashing and not meshing very well. But as I’ve mentioned the affinity between both parties here was pre-existent and their styles meld really well. This is especially apparent in one of the strong points of this album – the variety. No two songs sound the same, and Neurosis and Jarboe are bringing their experienced proficiency in many different styles of heavy and experimental music. The opener “Within” starts with Jason Roeder’s heavy tribal drumming style and Noah Landis’ piercing electronics, i.e. classic Neurosis, before introducing a creepy repeating Swans-esque spoken sample. The sonic assault abruptly ends, and Jarboe is left for a moment with her quiet, soothing singing, before the heaviness rushes down on you again.

The song is pretty standard fare for both artists. Decent, but not exactly the magic we’d expect from the meeting of such talented musicians. But the rest of the album proves this was only a warm-up. Like I mentioned, every song is a unique blend of electronic collages, heavy guitar textures, pounding rhythms and Jarboe’s infinite vocal variations, coming together in each individual song to explore some new feeling, new motifs and musical approaches. Take for instance “Erase”, the most metal song on the album, basically a heavy Neurosis track with Jarboe trying her hardest (and succeeding) to scream her lungs out, sounding as menacing as possible. But the very next track, “Cringe”, displaces the guitar-centric rock approach in favour of eerie, noisy electronics and Jarboe’s haunting, drawn out voice. The closing track, “Seizure”, and probably my favorite on the record, breaks down the album’s style completely, being a long, slow drone folk track, yet still keeping in it the spirit that has driven the entire project.

I believe this track encapsulates what makes this record so great. It has so much variety, so much experimentation and exploration of various styles, yet it still feels like a coherent record. It’s obvious that both Neurosis and Jarboe put their heart and souls in this record (and according to Jarboe’s recent interview, this is one of her most personal works), capitalizing on the artistic understanding and respect they hold between themselves, and this record is a perfect vessel for expressing that sentiment. To conclude, a bit of course needs to be mentioned about the fact that this is not only a re-release, but a remaster as well. Usually I don’t notice much difference between remasters and original, but here I can attest it’s actually readily felt. On either my earbuds, headphones or speakers, just a summary comparison proved to me that this version indeed sounds much better, much clearer and more powerful. So, if you’re interested in procuring this record, definitely get this version. And if you’re a fan of Neurosis, Swans or Jarboe and haven’t heard it before, please, please don’t sit on it any longer. Do yourself a favour and let it mesmerize you