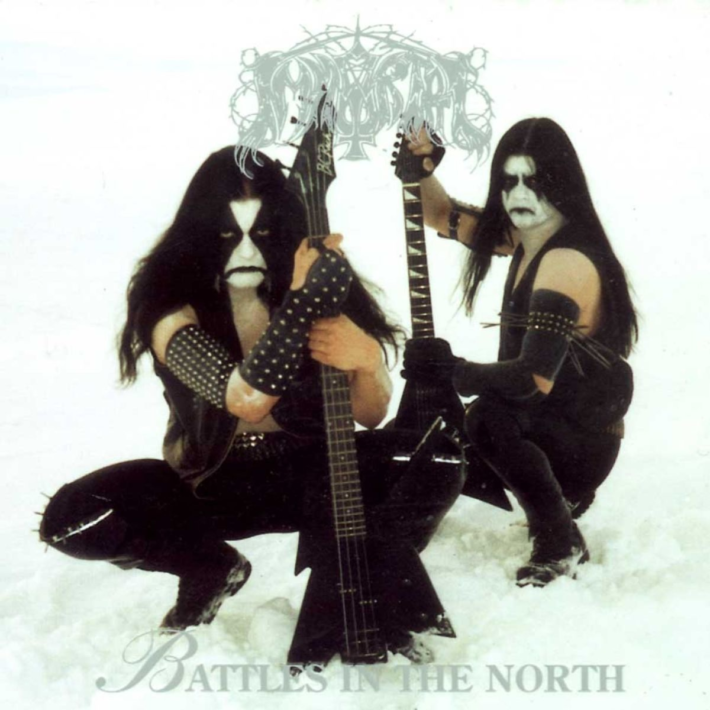 Can’t talk black metal without Immortal – veterans of the early-90’s Norwegian scene; one of the most influential bands in setting up the base black metal sound; pioneers of the black-leather-clad and corpse-paint aesthetic, while also eschewing the ultra-serious trve kvlt attitude and embracing its tongue-in-cheek ridiculousness. With nine albums under their belt, each one with its own distinct style, Immortal is an unavoidable black metal force – anyone interested in the genre will have to engage them sooner or later. The recent drama and parting ways between some core members is unfortunate, but it does not tarnish their strong legacy. In fact, their most recent record, 2018’s “Northern Chaos Gods”, proves they can still make killer music and will hopefully continue to do so. So let’s take this opportunity, the 25-year anniversary of Immortal’s third album, “Battles In The North”, to have a compelling conversation about black metal. As I’ve mentioned, each of Immortal’s albums has a distinct style, and this one is no different. It is not only an interesting example of the band’s development, but also about black metal’s musical ethos.

Indeed, black metal has always thrived on excess. Ever since the beginnings of metal, its continued musical development has demanded pushing the boundaries of rock music. It needed to be faster, heavier, the themes more provocative, the band image edgier. Heavy metal begat speed metal, turning into thrash metal, going towards death metal. When even that was not enough, when the unprecedented speed of blast-beats and downtuned riffs were no longer properly extreme, when even the violence and gore in the lyrics did not satisfy, the stage was set for black metal to be born. A decision was made to climb the final peak of extreme rock music. A metal that was the fastest, the most intense, the evilest and ugliest was envisioned. Thus, in early 90’s Norway it was born. Black metal has come a long way since then. It is nowadays commonplace to find records that are much faster, louder and uglier than what was created back then. Yet none of this would exist without the Norwegian experiment, not only owing to their invention of musical standards, but also their ethos of extremity and experimentation that is still alive and well.

“Battles In The North” is a prime example of this artistic drive. There was already a big jump between their first two albums; from “Diabolical Fullmoon Mysticism” to “Pure Holocaust”, everything became bigger and meaner. The first album felt like amateur hour next to this one’s utterly suffocating darkness. “Pure Holocaust” was and is a black metal standard – back then in 1993 there was nothing else that bristled with such aggressive dark energy. But Immortal were still not satisfied. Demonaz, the chief songwriter, said in an interview that he wanted to once again break the limits of speed, and the band did everything they could do achieve this. And so, a wonderful beast that is “Battles In The North” was born.

This would be a good moment to mention that “Battles” is a very divisive album among the fanbase. From those claiming it to be Immortal’s best to those decrying it as an absolute failure. What is curious is that both positions seem understandable to a degree. When you first hear the record, you’ll immediately notice several, well, let’s call them interesting musical and production choices. First off, there is the infamous drumming. Abbath is well known as a highly skilled guitar and bass player, but his drumming skills are less pronounced. Even though his performance on “Pure Holocaust” was perfectly adequate, decently fast and precise, any misgivings buried under the dense production. But here, the drums are mixed front and center, constantly battling the guitar for domination. Abbath also drums faster than he ever has. He might not be able to play that fast. The result is absolutely chaotic with a wobbly tempo, missed beats and bafflingly incoherent fills. The production does it no favours either. Other than mixing drums to constantly blast in your ears, there was an overall switch from the style of “Pure Holocaust”. While that record had a very dense and deep sound, mashing everything together in a low-end saturated wall of sound (which worked very well), the production of “Battles” is much sharper and clearer with every instrument distinct. But also, every instrument equally mixed to be very loud. “Battles” indeed, between Demonaz’ unrelenting riffage and Abbath’s mashing of absolutely everything on the drumkit seemingly at once. And don’t get me started on how overbearing the cymbals can get.

Speaking of guitar, while Demonaz’ work is certainly played in a much tighter and professional manner than the drums, the composition and songwriting are also, well, interesting. The chords switch so fast we’re sometimes talking war metal levels of chaos. As for the conceptual flow of songs, well, that isn’t exactly discernible. It’s always play hard, play fast, and then just abruptly cut out the song, leaving the listener confused as what the hell just happened. To sum it up, “Battles” is at every level a veritable cacophony. Yet if you continue to listen to the record despite your confusion at the band’s choices, at one point it clicks. You start liking it. It works. For some reason it just works.

For all of “Battles” misgivings, it is a record that just works, always despite itself. When I relistened to it a couple of times to write this review, I realised one thing – if you think about the music, approaching it analytically, it readily presents itself as just a shitty mess of bad choices. As it were, if you want to write about music, you have to take this approach to a degree. Yet when I stopped thinking about it and just let the music do its thing to my mind, it was a force to behold. The cacophony starts to seem intentional, whether Immortal actually conceived it this way or not. You find yourself in the midst of an extreme blizzard, the harshest, most unwelcoming embrace of the cold northlands. The howling winds overwhelm your every sense, the ice’s bite is merciless, the frost seeks to end your fragile being, and there are fierce demons lurking behind the snow’s impenetrable curtain. The far north, winter and coldness were always Immortal’s core subject, but not since “Battles” have they been presented in such an aggressive and extreme manner.

The Norwegian scene’s vision of black metal never intended it to be pleasant music. Quite the opposite in fact. It was always meant to shock, provoke and transgress, musically or thematically. Even though there’s plenty examples since then of ‘friendlier’ black metal, or some works which can be described as nothing short of ‘beautiful’, the extremity drive is the very principle which pushed the style where it is today. As I said, black metal thrives on excess, in its very conception and in many instances of its progression. There’s plenty of records in the Norwegian days which function in this principle – from “Transylvanian Hunger” or “Nattens Madrigal” and their insanely raw sound, to “In The Nightside Eclipse” and its overwhelmingly dense songwriting. “Battles” fits neatly into this group of attempts to go as far as possible. All of them attempt to come off as in some way revolting at first listen. But if you let them work their magic, they’ll take you to a place where no other music can. To conclude – “Battles” is, despite seeming like not much thought went into it, the epitome of black metal’s creative drive and its urge to transgress, even in the face of musical common sense. Ultimately, with enough determination and perhaps a bit of luck, the reward is the success of trying something different, even in direct opposition to established forms, and getting something new and exciting. This is one way how good art gets made, and how it inspires generations of artists to come. Black metal keeps doing it even 25 years later, and its creative forces show no sign of waning.