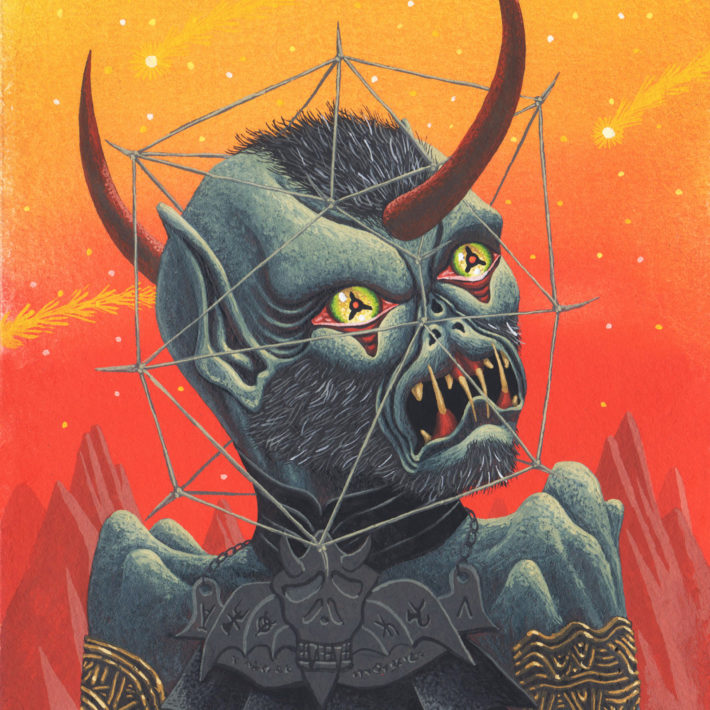 On May 24th of 2019, Esoctrilihum released The Telluric Ashes of the Ö Vrth Immemorial Gods, a very good, very intense, and very innovative black metal record that I had the honor of reviewing at the time. Now, not one year later, the French Asthâghul (the mastermind behind Esoctrilihum) releases his next album, Eternity of Shaog. Although it’s only been a year, this has been the longest hiatus between his releases: within just three years, this man has already released five full-lengths, the shortest of which was just under an hour of playing time. For this, I think he deserves a great deal of respect, for I know few bands (if any) that release music so frequently, without becoming repetitive or unoriginal. During this past year he definitely hasn’t been sitting around doing nothing, because Eternity of Shaog is loaded with innovative elements that make the album a new landmark in the evolution of his project’s sound.

While you normally shouldn’t judge a book (or an album) by its cover,  Eternity of Shaog is one the exceptions that prove the rule. Its album cover portrays some kind of demon (probably Shaog himself) in a surrealistic manner, which coincides pretty well with the music. On top of the very solid black metal foundation, Asthâghul puts countless different elements, from strings, to woodwinds and brass instruments, to more exotic sounds, creating a chaotic, disorienting and very daunting whole. Structurally, the record is divided into different passages, with each track representing a new step in the journey towards the Eternity of Shaog.

The record starts with Orthal, which is a solid black metal track, yet one of the most straightforward songs on the album, functioning as a humble introduction to the madness that’s to come. And this madness immediately gets released in the next song, Exh-Enî Söph (1st Passage: Exiled from Sanity). The overwhelming amount of musical layers dissonantly make you tumble into distress, quickly reminding you of how uncomfortable Esoctrilihum’s music actually is to listen to. There’s no riff or groove that goes on for more than one or two minutes without having a variation or interlude, not giving you one moment of rest in the journey that is this album. Even so, throughout each song, there is a common thread that you can hold onto while descending further and further into infinity. About halfway through Thritônh (2nd Passage: The Colour of Death), the symphonic elements give the song a mesmerizingly magical feeling that returns more than once throughout the album. On the next track, the use of strings gets altered to a new level. Whereas symphonic metal bands normally use strings as a countermelody to the lead guitar or to the vocals, Asthâghul decided to skip the guitar as a whole and leave the tremolo and sweep picking to the strings.

After an elaborate piano/woodwinds interlude, the music returns to its original level of intensity. What every song has in common, is that Asthâghul effectively indoctrinates the listener by repeating its main riff over and over, without it becoming monotonous. The following tracks confirm that Esoctrilihum really deserves to be called “avant-garde,” Asthâghul doesn’t seem to care what’s the norm in black metal. Instead, he experiments with whatever he seems fit, and he does it in such a manner that the album still feels coherent. After another few great black metal songs, Monotony of a Putrid Life in the Eternal Nothingness is an excellent finale. All the different instruments, the standard black metal instrumentation, together with piano, brass, woodwinds and strings, create a symphony of despair, discomfort and somehow claustrophobia, as a culmination of the journey towards Shaog’s Eternity.

In conclusion, Eternity of Shaog is a great record that’s chaotic, yet amazingly coherent. It doesn’t give you a second of rest, for just when the shrill shrieks of the strings wind down, the heavy drums and bass lines pound into your eardrums. Structurally, each track could be an album on its own, for they contain so much variation that no two minutes sound the same. If you’re new to Esoctrilihum, I recommend you check out his music right now, and if you know him already, you know what you’re getting into and Eternity of Shaog won’t disappoint you.